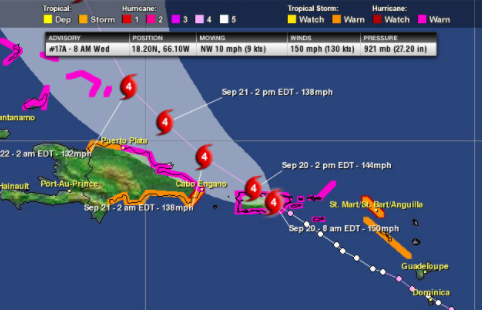 Weeks after Hurricane Maria made landfall throughout the Caribbean and most islands are still trying to recover. The Category 5 storm took a path that spared a lot of the islands recently devastated by Irma but did significant damage to others.

Hurricane Maria first made landfall on Monday night on the island of Dominica as a Category 5 storm. It weakened a little as the eye moved over the land and then quickly regained Category 5 status as it churned out into the Caribbean Sea again. After a direct hit on Dominica, outer bands of the storm slammed the island of Guadeloupe.

The storm then made a beeline for the U.S. Virgin Islands. The southernmost island, St. Croix, saw the worst of the damage. St. John and St. Thomas also felt some of the outer bands of the storm.

Maria then headed for Puerto Rico next. A direct hit here, too, Maria took a powerful northwest track through the island as a Category 4 storm. It still had winds of 155 mph. After causing destruction in Puerto Rico, the storm’s outer bands affected the Dominican Republic and it began to weaken as it headed towards Turks & Caicos and the Bahamas.

Dominica is the home to over 70,000 people. The destruction there was shocking. Roosevelt Skerrit, the prime minister of Dominica, remarked that “Initial reports are of widespread devastation… The winds have swept away the roofs of almost every person UI have spoken to or otherwise made contact with.” Hurricane Maria was the first Category 5 storm in known history to hit this island. Even the island’s hospital roof was blown off during the storm. Remaining debris from Hurricane Irma became potentially lethal projectiles at the storm raged on.

Although the strongest winds did not hit Guadeloupe, high winds and heavy rains still managed to flood the island, damage buildings, and cause widespread power outages. Officials urged residents to “not go outside under any conditions whatsoever.”

As of October 7, 2017, blanket distribution and emergency roofing supply distribution and installation are still underway for Dominica. Materials like tarpaulins were still needed. At least 100 metric tons of food were delivered to meet the needs of about half the people in 80 out of 100 locations in the country for three days. Potable water is still urgently required as the island’s 44 networks are repaired. Reports that road access is improving is hopeful. At this point in time, there are still over 2,700 people living in shelters.

On the U.S. Virgin Islands, the Category 4 storm ripped vegetation bare and destroyed wind measurement equipment. Recovery efforts are still underway. Widespread power outages are still a problem throughout St. Croix. Throughout the territory, 90% of people are without power. All of the territory’s schools are still closed but plan to open on October 10th. The vast majority of the population is also still without potable water.

Vice President Pence flew into St. Croix nearly two weeks after the storm and vowed that the administration “will be with you every day until the U.S. Virgin Islands comes all the way back.” Over 160 families in the area of Tutu are living in shelters and the hospital is still recovering from flooding from both Irma and Maria. More than 14,600 islanders have registered for assistance with FEMA and there is still no working internet, TV, or radio.

Hurricane Maria recovery is a slow process for the island of Puerto Rico because the storm was the third-strongest hurricane to ever hit it. When Maria ripped through the U.S. territory, it was a powerful Category 4 storm. Its winds of 155 mph left 100% of the island without power and even broke the wind gauges on the island. Immense flooding crippled the islands as cell service, drinking water, and food became impossible to find. Our weather tracking software showed Maria slamming into Puerto Rico.

In its wake, the U.S. Federal Emergency Management Agency sent over 3,000 agency staff members to both Puerto Rico and the U.S. Virgin Islands just days after the storm moved northward away from the island.

Reports show that less than 10% of the island had electricity and water since Maria struck. Even with a visit from the president and some aid, day-to-day life is still a struggle for survival as many U.S. citizens cannot get the basic necessities. Flash flooding and downed trees incapacitated the island and made it nearly impossible to deliver supplies where they needed to go. The island, home to more than 3.5 million people, may not see 100% electricity restoration for another four to six months, according to San Juan Major Carme Yulin Cruz.

Hurricanes in the Caribbean 2017

This has been a rather active season for hurricanes in the Caribbean. Maria was the seventh hurricane of the 2017 season. 2017 is only the ninth year on record with seven hurricanes by September 17. To put this into perspective: 13 named storms formed by September 17. The average is 7.6.  We’ve seen a few different storms go through rapid intensification thanks to warm waters and low pressure.

Less than two week’s before Hurricane Maria devastated these areas, Hurricane Irma created widespread destruction as well. Irma, another Category 5 hurricane, absolutely battered the Leeward Islands and the state of Florida. Get prepared for hurricane season with these Hurricane Safety Tips and never underestimate the power of Mother Nature.