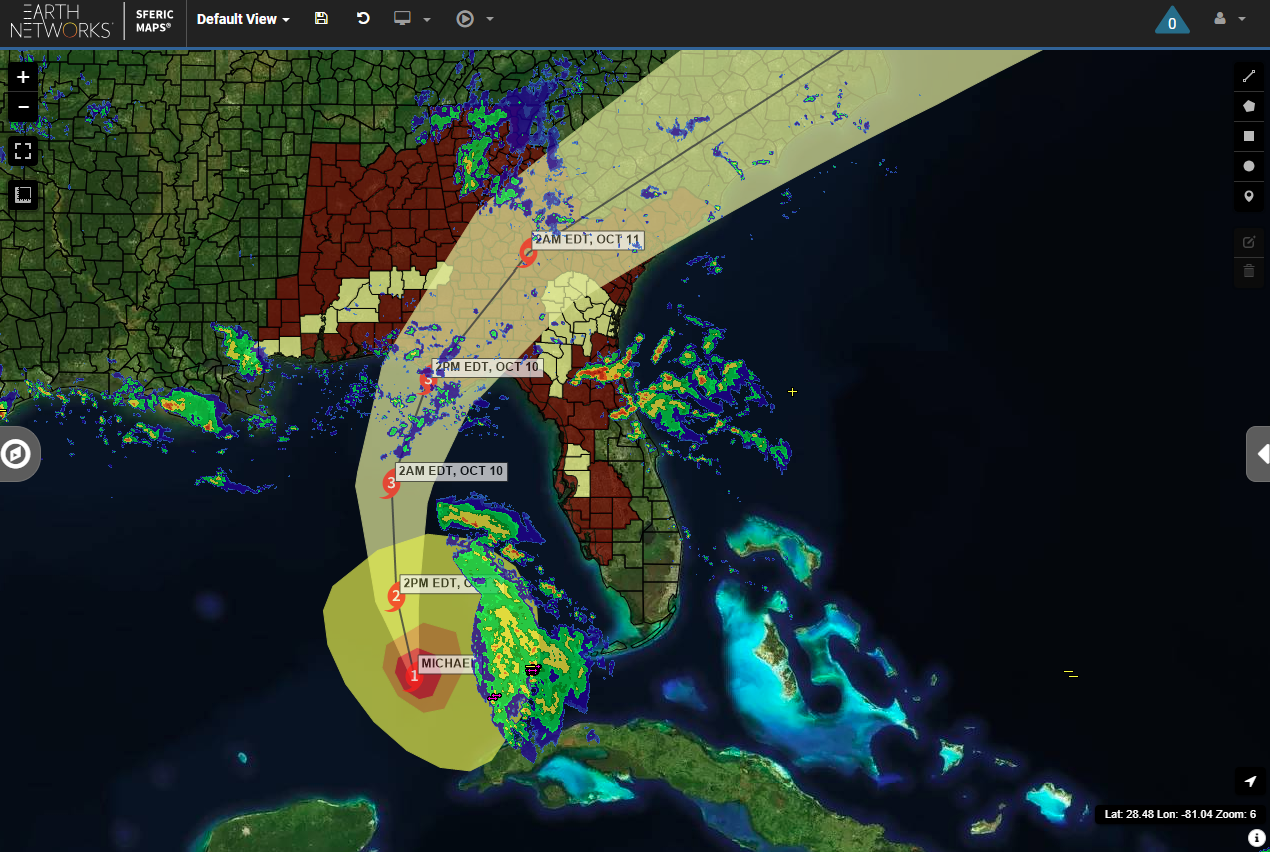 Hurricane Michael may seem like a surprise to you, but our meteorologists know that anything can happen during hurricane season.

The quiet weeks after Hurricane Florence lulled a lot of Americans into a false sense of security that the hurricane season was over. However, hurricane season doesn’t end until November. While the peak has come and gone, Hurricane Michael is showing us that it ain’t over til it’s over.

Continue reading to learn everything our meteorologists know about Hurricane Michael and how you can get a free tool to track the storm.

Hurricane Michael is on a steady course northward and will make landfall on the Florida panhandle on Wednesday.

As of 8 a.m. EDT, Category 2 Hurricane Michael was located near 24.5 N and 86.1 W. For reference, this is about 395 miles south of Panama City, Florida. It’s also about 365 miles south of Apalachicola, Florida.

Top sustained winds have increased to 100 mph and the system is moving north-northwest at 12 mph. Hurricane Michael’s minimum central pressure has fallen to 968 mb. This is about 28.58 inches of mercury.

Hurricane Michael is moving north-northwestward over the Gulf of Mexico. Here are the 4 am CDT October 9th Key Messages on Hurricane #Michael. pic.twitter.com/zKG49aiLqY

Hurricane Warnings are in effect from the Alabama and Florida border to Suwannee River, Florida.

Hurricane Watches are in place from the Alabama and Florida border to the Mississippi and Alabama border.

Tropical Storm Warnings are active from the Alabama and Florida border to the Mississippi and Alabama border. They are also in effect from the Suwannee River to Chassahowitzka, Florida.

A Tropical Storm Watch is in place from Chassahowitzka to Anna Maria Island, Florida. This area includes Tampa Bay. Tropical Storm Warnings are also in effect from the Mississippi and Alabama border to the Mouth of the Pearl River and from Fernandina Beach, Florida to South Santee River, Florida.

Do You Have to Worry About Hurricane Michael?

Where is Michael heading? If you want to ask our meteorologists specific questions and get the latest Hurricane Michael Update, please join us for a Facebook Live session today at 12 p.m. EDT.

If you head over to our Facebook page now and like it, you’ll get a notification when we go live. Don’t miss this unique chance to ask Earth Networks Meteorologist, Steve Prinzivalli, your Hurricane Michael questions. He’ll also offer plenty of tips to keep you, your loved ones, and your business safe from the storm.

Alternatively, you can join the Facebook Live video straight from this post. Just tune in below when we’re set to go live (12 noon!)

What We Know About Hurricane Michael’s Future 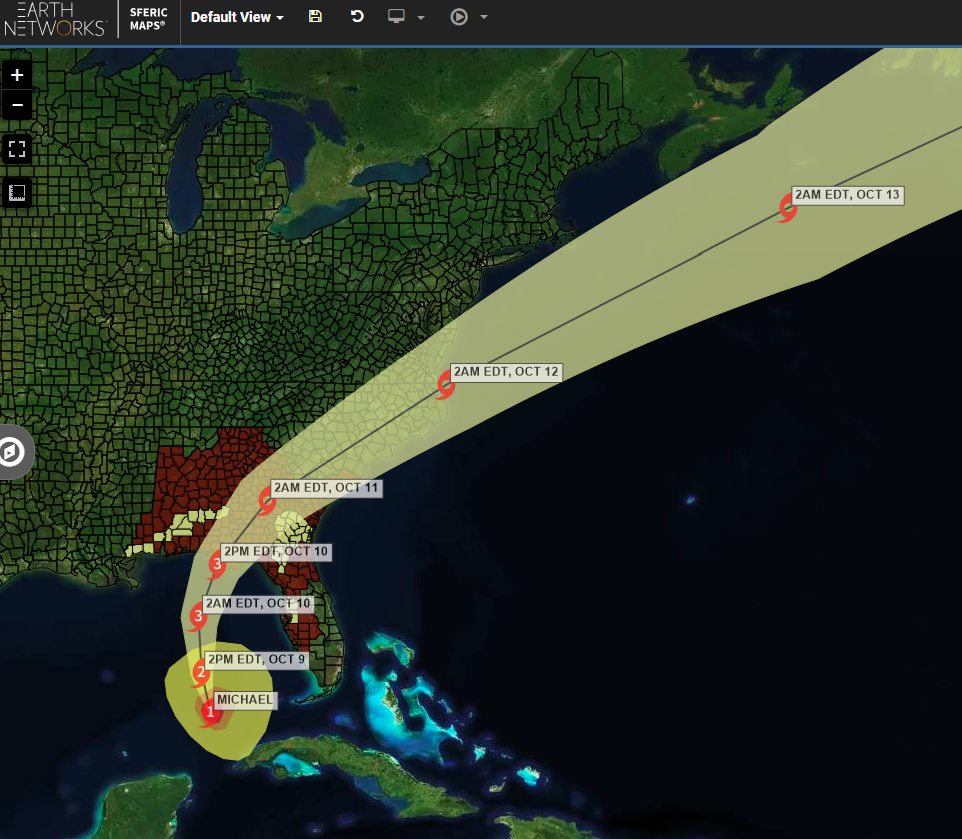 Hurricane Michael will continue gradually intensify over the next 24-36 hours. Michael will likely become the Atlantic’s second major hurricane of the 2018 season due to warm waters and a favorable upper-level environment. Remember, a major hurricane is a Category 3 or above on the Saffir-Simpson Hurricane Wind Scale. We expect Hurricane Michael to become a Category 3 storm late Tuesday or early Wednesday in the eastern Gulf of Mexico.

Michael is on track to make landfall across the Florida Panhandle Wednesday afternoon. After landfall, Michael will stay an extremely powerful storm that may produce destructive winds. We expect Michael to accelerate east-northeastward into the Carolinas on Thursday. By the end of the work week, Michael will barely scrape New England.

As Hurricane Michael approaches the U.S., there are some severe weather conditions to look out for. The strongest winds and greatest storm surge will occur east of the eye of the storm. However, heavy rain will produce localized flooding across much of the eastern Gulf Coast, northern Florida, and through the Southeast U.S. during the midweek.

If you are in the potential path of this storm, listen to local officials and start your storm preparations. If ordered to evacuate, heed local officials’ advice and leave as soon as possible.

As Michael moves east-northeastward to the Carolinas and up the coast, residents should be prepared for heavy rain. This rain is likely to produce localized flooding across the saturated Carolinas and the Delmarva Peninsula later this week. Residents effected by Hurricane Florence should especially be prepared for flooding.

Only three other tropical systems have made landfall across the Southeast U.S. this season. Subtropical storm Alberto came ashore on Laguna Beach, Florida back in May.

In late August, Tropical Storm Gordon made two U.S. landfalls. The first was in the Florida Keys and the second was just west of the Alabama and Mississippi border.

The third storm to make landfall was the strongest so far: Hurricane Florence. Florence crawled ashore in mid-September, near Wrightsville Beach, N.C. Here’s a time-lapse of Florence making landfall via Sferic Maps. 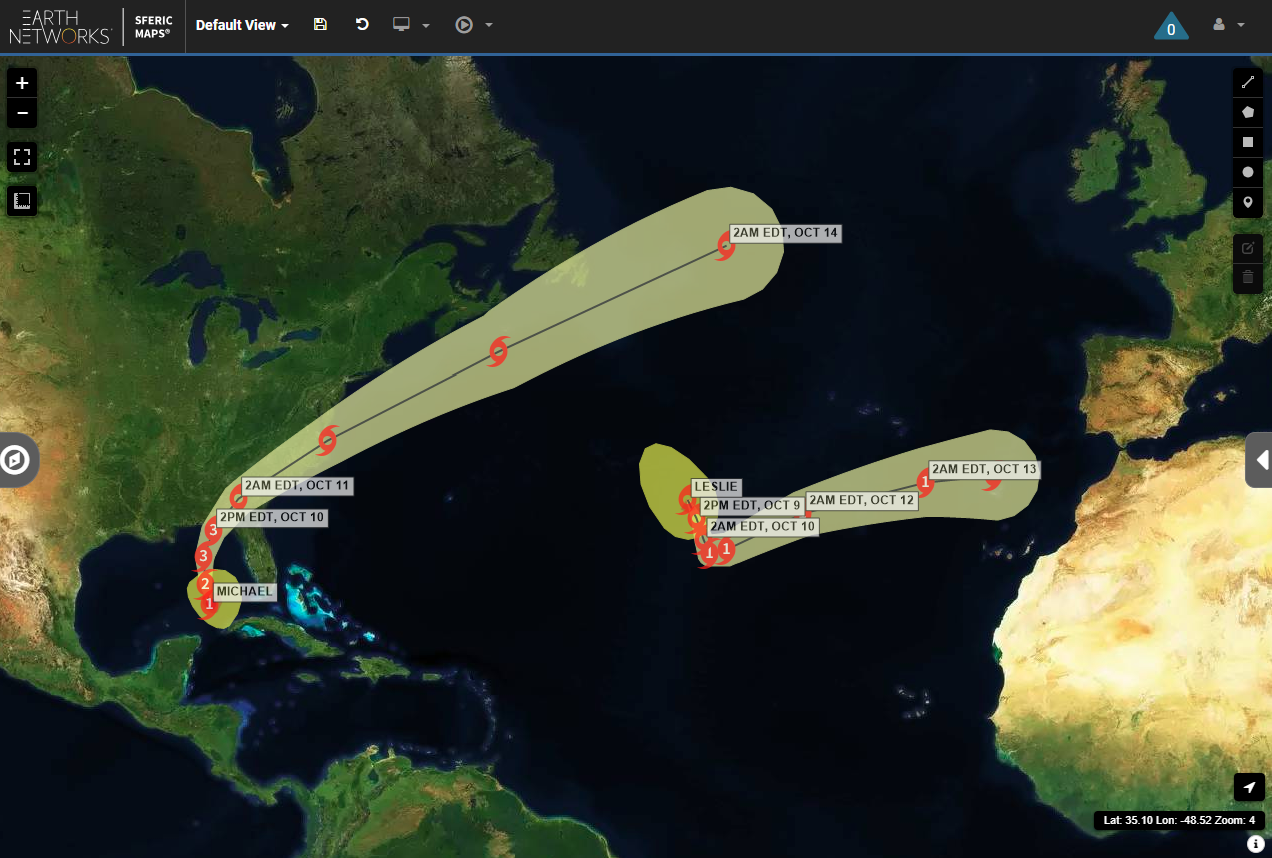 There is another late-season system brewing in the Atlantic. This one is a particular problem for transportation and logistics professionals. Tropical Storm Leslie lingers across the open Atlantic affecting shipping lanes. As of 5 a.m. AST/EDT, Leslie was located near 32.2 N and 43.9 W. For reference, this is about 1,035 miles west-southwest of the Azores.

Leslie is currently packing sustained winds of 65 mph as it moves south-southeast at 13 mph. The minimum central pressure has fallen to 983 mb. This is also 29.03 inches of mercury. We expect Leslie to strengthen over the next few days, likely becoming a hurricane again.

As Hurricane Michael and Tropical Storm Leslie are showing us, hurricane season isn’t over! If you’re worried about Michael, Leslie, or any other tropical activity, you can get free access to our commercial-grade weather visualization tool: Sferic Maps and track these storms in real-time.