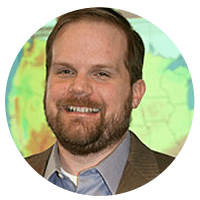 James West joined Earth Networks in 2005 and is currently senior meteorologist and editorial content editor. Overall, he has more than a dozen years of experience in meteorology. His career began in the Netherlands working for MeteoConsult, the largest private weather firm in Europe. Upon his return to the States, he joined USA TODAY working under the tutelage of weather legend Jack Williams, and provided weather content used in the paper, as well as produced award-winning multi-media features for USATODAY.com.

West earned a bachelor of science in meteorology from Penn State University and a Master’s in Business Administration from Hood College in Frederick, Md. He is married with two young daughters.