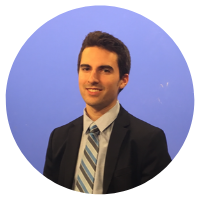 Born and raised in the snow belt city of Erie, Dan Rupp became interested in weather after enduring the frequent heavy lake effect snowstorms that manifest in the Northwest PA area. These winter storms and witnessing thunder snow first-hand, pushed him to pursue a career in Meteorology.

Dan obtained his Bachelor of Science in Meteorology Degree at the Pennsylvania State University where he forecasted for Penn State’s Campus Weather Service. He also interned at WJET-TV in Erie, PA. There he received knowledge of the televised weather world. He then launched his professional career at KSAN-TV in San Angelo, TX as a weekend meteorologist & producer.

Many Texas storms later, Dan gained a copious amount of severe weather experience ranging from large hail to tornadoes. In August 2017, he returned to his hometown to join the WJET-TV news team as a meteorologist. In addition to predicting weather for the local area, Dan also worked at Cirrus Weather Services, LLC where he would forecast winter threats for snow plow companies in several midwestern cities. Dan joined the Earth Networks team in December of 2019.

When he isn’t forecasting, Dan enjoys snowboarding, hiking, and traveling.