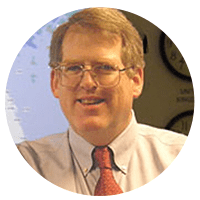 James Aman is a senior meteorologist at Earth Networks In this role, Aman provides customized briefings for utility industry clients, and builds forecasts for professional sports teams. Aman joined the company 1995 in a technical support role, where he helped to roll out large weather networks in cities across the U.S. Later, Aman became the first technical support meteorologist for the media services group.

He worked in media services for 10 years, helping to bring live weather data and cameras to TV stations nationwide.

Prior to joining the company, Aman worked as an industrial meteorologist for Weather Corporation of America, where he performed forecasting for electric and gas utilities, nuclear power plants, trucking companies and state highway departments. He was also an on-air weather voice for radio stations in the Midwest. Aman has also worked part-time as a federally certified weather observer, at both Lambert International Airport in St. Louis, and at Dulles International Airport near Washington, D.C.

Aman holds a bachelor of science degree in meteorology from St. Louis University. In his spare time, he enjoys hiking and canoeing. He keeps very active with his wife and three kids, and also is involved in his local church.