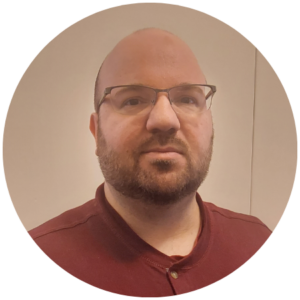 Rob Miller joined Earth Networks in November of 2022 as a meteorologist. Rob comes to Earth Networks with nearly 20 years of forecasting experience, having forecasted for clients all over the world.

Rob became interested in weather at an early age. One of his earliest memories of the weather was when Hurricane Gloria passed near his home in southeastern Pennsylvania as a very young kid, bringing rain and wind to the area. The mega-snowstorms of 1993 and 1996 also piqued his interest in learning more about the weather. But nothing caught his attention more than when a tornado struck a housing development 5 miles from his house in 1994.

This interest in the weather led Rob to pursue a degree in meteorology. Rob attended the Pennsylvania State University and received a Bachelor of Science in Meteorology in May 2003. Rob has been forecasting the weather since then.

One of Rob’s favorite activities outside of work is traveling. Rob also likes to read comics, play games, and serve at his local church.