What Is A Polar Vortex?

The polar vortex and arctic chill felt throughout the United States


What Is A Polar Vortex? | The 2021 Arctic Chill Felt Throughout the Country

Although we are approaching Spring, this winter season was a doozy, especially for Texas. Throughout this guide we will cover Polar Vortex and Arctic Chill topics such as polar vortex basics, freezing temperatures, extreme cold, cold weather safety, and more. 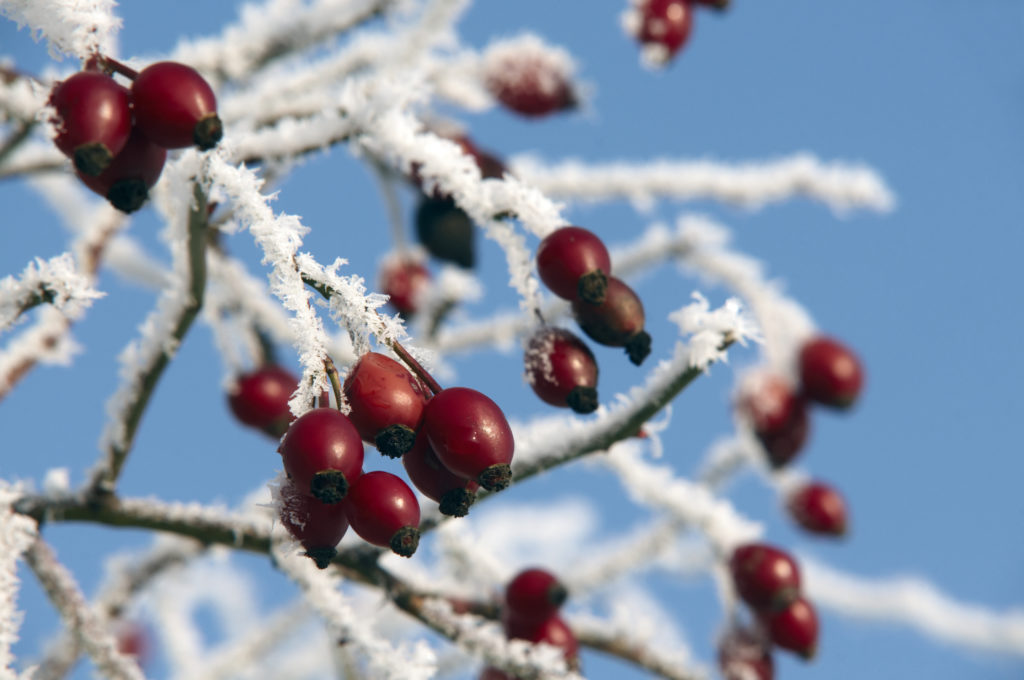 In this polar vortex guide, we will cover the following topics:

What Is a Polar Vortex?

A polar vortex is a low pressure area and pool of cold air that is present over the poles throughout the year. We call it a vortex because of the counterclockwise flow of air that traps the cold air close to the pole.

what is a cold front?

A cold front is the boundary of an advancing mass of cold air rotating around the counterclockwise flow of a low pressure system. Another way to think of a cold front is as the dividing line between an advancing cold air mass – which is cold and dense – and the warmer air mass it replaces. Significant weather, including rain, snow, and thunderstorms, form on the front as the cold air lifts the warmer, moister air upwards. 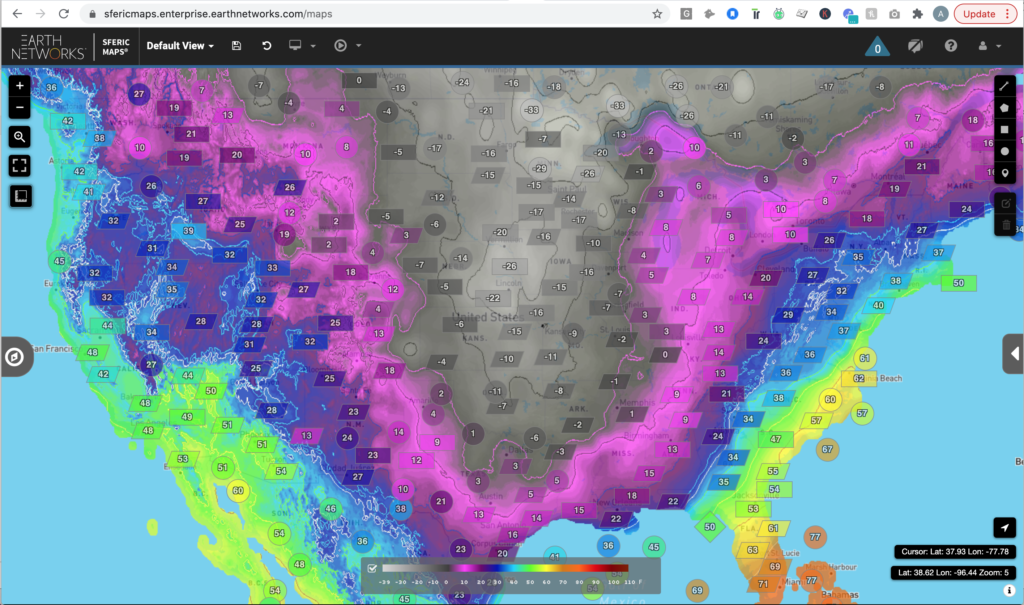 Pictured above, a glimpse of the chilling arctic temperatures that occurred on February 16th, 2021 at 8:41:55 AM EST, taken from our Earth Networks’ Sferic Maps.

Typically, the southern extent of the vortex goes no further than 40 to 50 degrees latitude and typically stays north of the U.S. border. Occasionally, an active winter jet stream becomes amplified and a pocket of cold air can move north to south into the lower latitudes of the northern hemisphere. This is when very cold – often dangerous – temperatures occur. 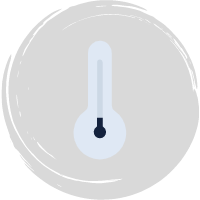 The end of February saw some unusual weather for Texas, with locals facing extreme cold temperatures, power outages, loss of heat, and lots of snow. For a state known for its arid plains and hot weather, this was rather unexpected. The state saw its coldest temperatures in more than 30 years.

According to the United States National Weather Service (NWS), this happened because of an “arctic outbreak” hailing from the US-Canada border. The result included winter snowstorms and below freezing temperatures in a state that in not accustomed to such a climate, with temperatures 40 to 50 degrees Fahrenheit below average.

Satellite data  published by NASA  showed just how severe the extent of the power outages was in Texas, leading to statewide blackouts.

As a result of the severe winter storm weather, President Joe Biden declared an emergency in Texas. The Federal Emergency Management Agency (FEMA) was enlisted to help coordinate disaster relief efforts for those impacted by the severe weather. 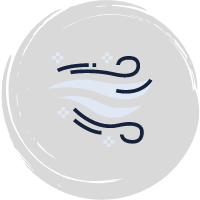 How to prepare for an arctic chill

Preparedness for severe weather is essential in order to mitigate injury, damages, and even death. Earth Networks’  severe weather tracking solutions  can help counties, cities, and organizations stay prepared with short-term forecast updates and detailed warnings that can help protect you from the dangerous effects of severe weather, i.e. a polar vortex, arctic chills, and below freezing temperatures. 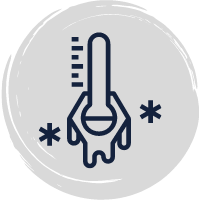 The science behind Polar Vortexes

“In a general sense,” explains Mark “it gets forced south by a mid-latitude ridge pushing pole-ward and displace the vortex southward. As taught in physics – for every action, there is an equal and opposite reaction.”

To learn more about polar vortexes, check out  this article. Pictured below,  3D polar vortex simulation  from the Journal of Atmospheric Sciences “Uncovering the Edge of the Polar Vortex” by Serra et. al. via George Haller.

what is the difference between a polar vortex and cold air?

The polar vortex is the “delivery engine” of the surface cold air from the high latitudes of the northern hemisphere. The polar vortex is aloft and the flow around it traps the surface cold air in it’s whirlpool. When this vortex gets dislodged and begins to move south – it creates the “arctic outbreak” by allowing the cold surface air to be transported even further south. The polar vortex that caused the central U.S. (and Texas) arctic outbreak only dropped as far south as the Canadian border, but it was the delivery mechanism to push the arctic air all the way through Texas and to Mexico. 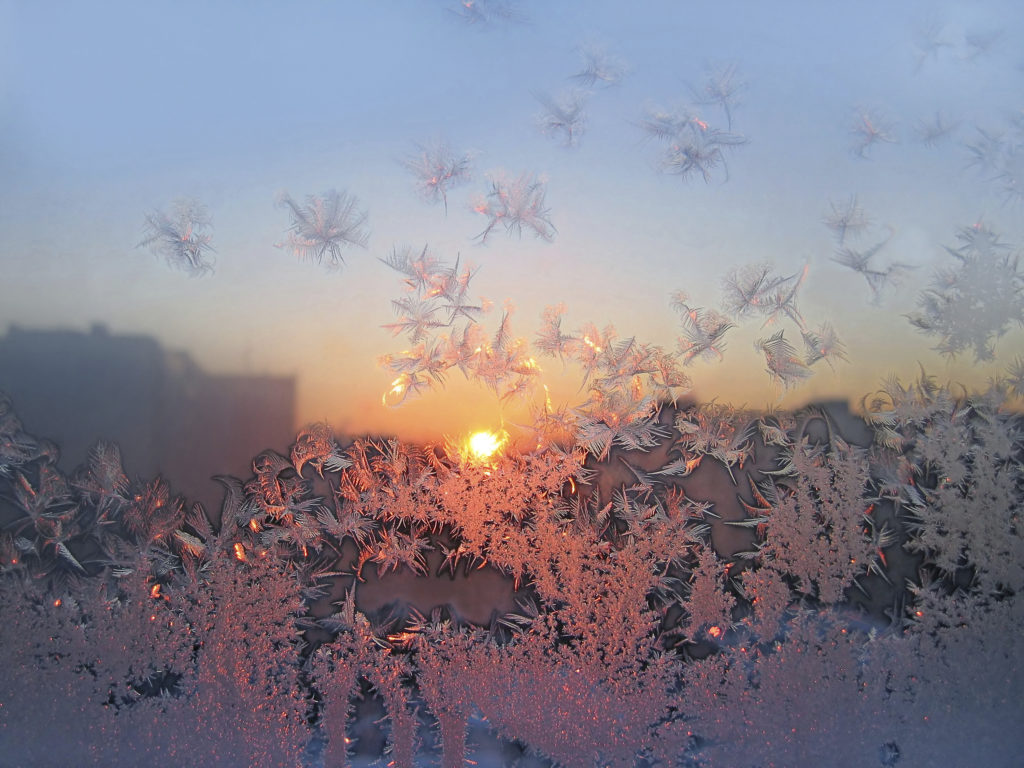 Freezing temperatures and arctic chills, albeit unpleasant and potentially dangerous, can be combatted with the proper  severe weather safety. Having emergency kits on hand and at home is one way to stay prepared.

Earth Networks’ team of 24/7 meteorologists offer recommended actions for your business. If you have any polar vortex or arctic chill related questions, let us know by reaching out on social media. We have a  team of meteorologists on staff to help with weather-related decision-making. 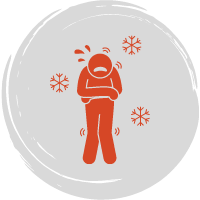 Have a question about Polar Vortexes? Tweet us using the hashtag below and our  24/7 Meteorology Operations Services team will be glad to answer you!