Which system better safeguards against lightning? 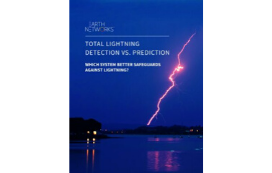 Lightning detection vs. prediction: Which is better? This quick real case study will help you find out!

Use the clickable table of contents below to jump to different areas of the piece. You can jump back up to the table at any time by clicking “Back to Top.”

Want to Take a Copy with You?

Download a PDF version of the eBook you can reference later.

Which System Better Safeguards Against Lightning?

The PGA Golf Professionals at a premier club on Hilton Head Island had a problem. While they invested and installed a new system that promised to predict lightning, it was not working and felt that the system had some deficiencies.

They researched alternatives and contacted Earth Networks to learn more about our total lightning detection solution. The club asked us how our solution would compare with the lightning system they had installed—and whether we could validate what they had experienced.

We compared the data from our solution to data from their existing system from April – October 2013:

On every metric, the Earth Networks Total Lightning Solution beat the system that claims to predict lightning.

Network Approach: Sensors are part of a network, and all detect and report lightning risk in unison – even if one sensor happens to go down. Deploying just one sensor means there is backup in place should the sensor go offline.

Detects Total Lightning: Detects in-cloud and cloud-to-ground lightning, a capability that is well beyond that of existing networks and single-node “prediction” systems.

Comprehensive Alerting: High rates of in-cloud lightning serve as precursory indicators of the potential for severe weather. Alerts for lightning and severe weather can be set for multiple locations and delivered via multiple methods – mobile devices, computers, and mass outdoor alerting systems

Know the Facts About Lightning “Prediction”

Thank you for reading our eBook: “Total Lightning Detection vs. Lightning Prediction: Which System Better Safeguards Against Lightning.”

Download a PDF version of the eBook you can reference later.

Now that you know total lightning detection is the best safeguard against lightning, it’s a good time to learn more about the life-saving tools it powers!

We designed our industry-specific buying guides to help you build a comprehensive weather safety solution rooted in the science of total lightning detection. Check them out and make sure your weather safety tools are as effective as possible.