The team updated their outlook to reflect a below normal overall season.

“The rest of the season is forecast to feature near normal activity, but overall final numbers will likely be below normal due to the quiet season so far,” says Earth Networks meteorologist Anthony Sagliani

The Atlantic hurricane season runs from June 1 to November 30. It covers the Atlantic, Caribbean Sea, and the Gulf of Mexico.

After a busy 2018 hurricane season, our meteorologists forecast a near normal season for 2019. This forecast included 10-14 named storms, 4-7 hurricanes, and 2-3 major hurricanes.

Although we may see an uptick in the number of storms since we are nearing the peak of the season, the overall forecast numbers dropped to below normal overall.

Our experts are now forecasting 8-12 named storms, 3-6 hurricanes, and 1-2 major hurricanes as total numbers for the 2019 season.

Remember, a major hurricane refers to hurricanes of Category 3 or higher.

Our forecast changed for a few reasons including:

Driving the slow start has been a weak El Nino and large plumes of Saharan dust. When Sharan dust sweeps off the African continent it also can spread across the tropical Atlantic. This dust creates an unfavorable environment for tropical storms to form.

As we head into the autumn, the influences of these tropical system suppressors will fade. Therefore, we’ll experience an increased likelihood of storm development.

ENSO stands for the El Nino-Southern Oscillation. This is a recurring climate pattern involving changes in the temperature of waters in the central and eastern tropical Pacific Ocean.

El Nino is the warming phase of ENSO while La Nina is the cooling phase.

A Quiet Season So Far

By this point in the hurricane season, we typically see 4 named storms, 1.5 hurricanes, and 0.5 major hurricanes (remember, these are averages). But in 2019, we’ve seen a bit less than average.

As of August 22, we’ve seen 3 named storms 1 hurricane, and no major hurricanes.

The three named storms were Andrea, Barry, and Chantal.

This year is the first time since 1982 that no named storms have occurred between July 5 and August 19.

Just because this season has been quiet doesn’t mean it’s been without destruction. 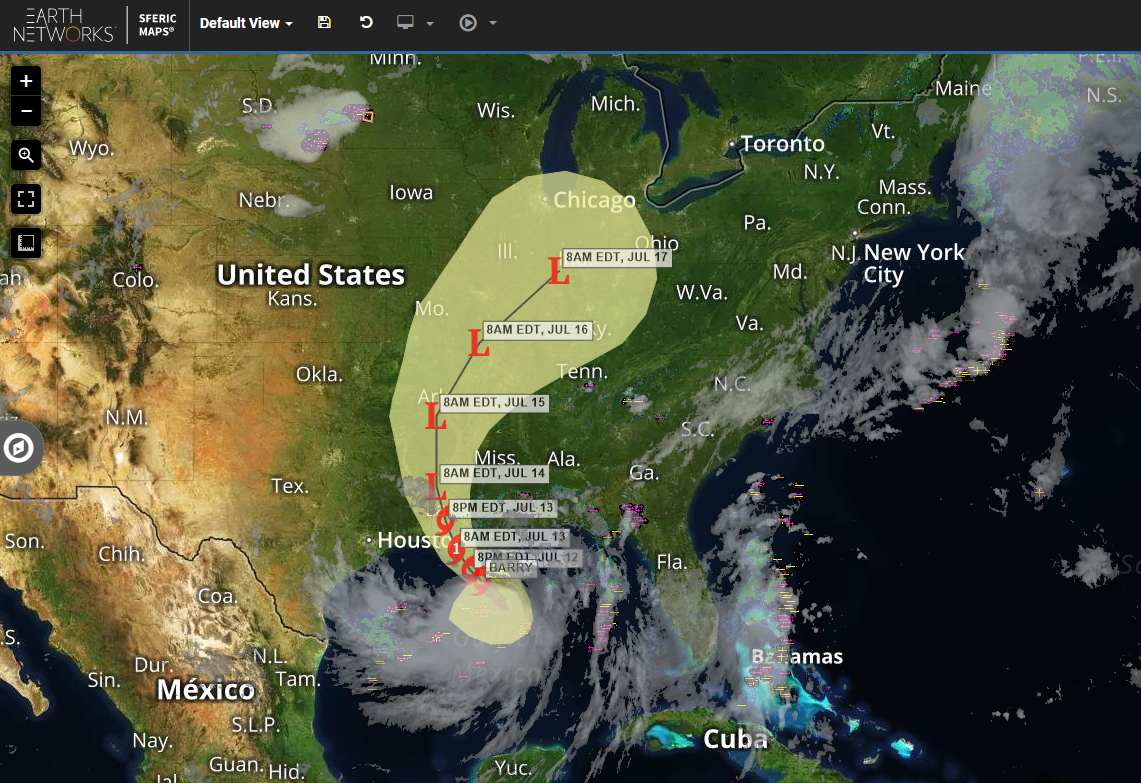 Hurricane Barry made landfall on July 13, 2019. This storm made landfall as a Category 1 hurricane and dropped amounts of 20-30 inches of rain in localized areas of LA. It caused an estimated $600 million in damages.

As we’ve previously mentioned, the peak of hurricane season has yet to come.

Hurricane season typically peaks in September. Two-thirds of all hurricanes (and virtually all major hurricanes) occur in the ten weeks from early August to mid-November.

The highest risk of tropical development in September will occur in the following areas:

In October, the development risk shifts to these areas:

Any storms that develop in these areas have the potential to threaten the U.S. mainland.

Remember, it only makes one hurricane to make a season memorable.

Residents and businesses living and operating in coastal areas near the Gulf of Mexico and along the Atlantic seaboard should always have emergency plans for when a storm threatens.

How Much Do You Know About Hurricanes?

Are you a hurricane expert? Test your knowledge by taking our short hurricane quiz or take a deep dive on our hurricane fact page.