Santa Ana winds aren’t like a normal gust of wind. In fact, there are only two places in the world that have these types of down-slope winds. While the damage of 100 mph winds might seem greater than these 30 mph winds, that’s simply not the case.

Fires need fuel. That should come to no surprise to most people. There can’t be fire without something to burn. However, did you know that wind also plays a big role when it comes to spreading and sustaining fires? Let me explain.

Wind doesn’t work the way your breath does when you go to blow out a candle. Instead, winds stoke up uncontrolled flames. Imagine fanning a fire in your fire pit with a piece of cardboard. Winds supply fires with oxygen, which fuels the fire and pushes it across land at a faster rate. This is a terrible combination when it comes to wildfires.

Down-slope winds are even more effective at stoking fires. This is because there is a compression when the air moves form higher elevations to lower elevations. Unless you live under a rock, you’ve probably heard of Santa Ana winds this year on the news while reporting wildfires. These winds are perfect for heating, fueling, and spreading wildfires. Let’s recap this year’s wildfire history. 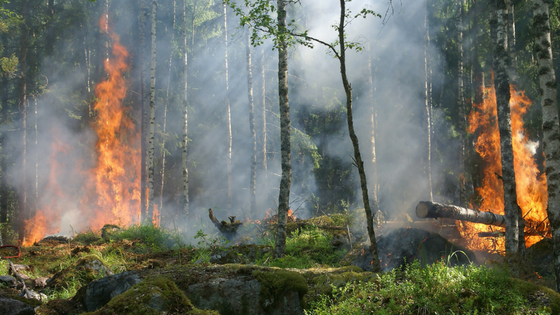 2017 has been one of the worst wildfire years throughout the United States so far. When Santa Ana winds and fire mix, it isn’t pretty for the typically dry landscape of California in the fall. In early October, a series of wildfires starting spreading throughout the state. They started in Napa county and spread through most northern counties. A red flag warning was in effect for weeks as 17 separate fires burned. The fires spanned from 1,000 to more than 20,000 acres every day. By October 14, the fires had burned more than 210,000 acres, evacuated 90,000 people, and killed 43 people.

According to Earth Networks Senior Meteorologist, James West, “They are down-slope winds that cause temperatures to rise and humidities to drop. The high winds, high temperatures and the lower humidity causes brush to dry out and make it easy for fires to start and spread rapidly.”

A spark from a downed power line blown over by the wind is all of the spark needed to create rapidly moving wildfires. During the months of September and October, it’s more important than ever for counties in the region to adhere to weather forecast alerts for even slight rises in wind speeds.

The latest Santa Ana Wind Season Outlook by the National Geographic Area Coordination Center, issued on November 3, 2017, indicates that there are more fires to come. Research suggests that there will be the potential for near and above normal number of Santa Ana wind days for both the November and the November through January time periods. Fuels are still critically dry across southern portions of California.

What can you do if you live in the area? The most important way to protect yourself, your business, and your family from wildfires is to pay attention to weather and news alerts and to heed evacuation orders. Fires can spread quickly and trap people in homes and neighborhoods.

This season was so deadly because the fires spread overnight. It’s important that if your area is under warning, you have a different place to go to avoid this tragic problem.