This California lightning analysis was prompted and researched in a collaborative effort by the following Earth Networks employees:

Unfortunately for many across the United States, March has come in like a lion in full force. It’s bringing severe weather in the forms of tornadoes and lightning across the country.

An example of this early March severe weather occured in Southern California on the evening of Tuesday, March 5, 2019. This comes just days after deadly tornadoes in Alabama.

Severe thunderstorms moved through the area stretching from Santa Barbara County to LA County. These storm cells brought prolific amounts of lightning to the region. This is weird because Southern California doesn’t typically see winter thunderstorms.

Just how much lightning rained down on Tuesday night?

The image below shows our total lightning network for those hours for latitude 32.5 to 35.6 and longitude -122 to -115. The magenta strikes indicate in-cloud pulses. The yellow strikes indicate cloud-to-ground pulses. 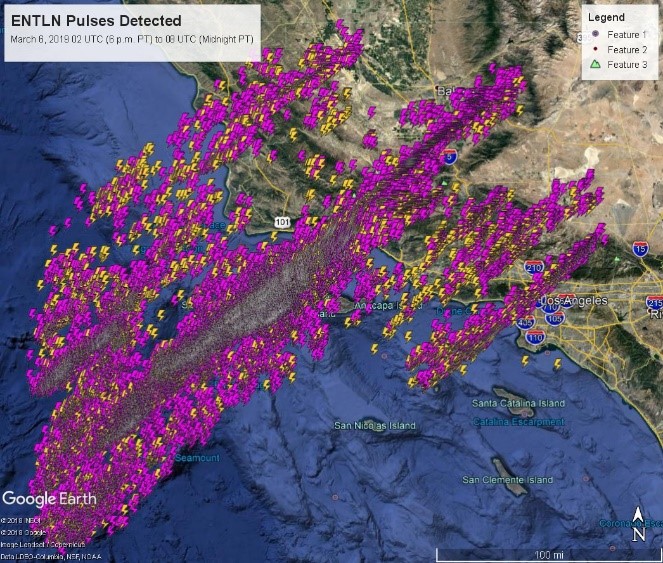 There were multiple lines of thunderstorms on Tuesday night. They propagated from southwest to northeastward from the offshore inland over Southern California. This total lightning data powers our cell track and Dangerous Thunderstorm Alert capabilities.

During this California lightning event we tracked an offshore storm cell over Santa Rosa Island and San Miguel Island. It had a flash rate of 12.33/minute at 8:08 pm local time (04:08 UTC). You can see those cell tracks below. 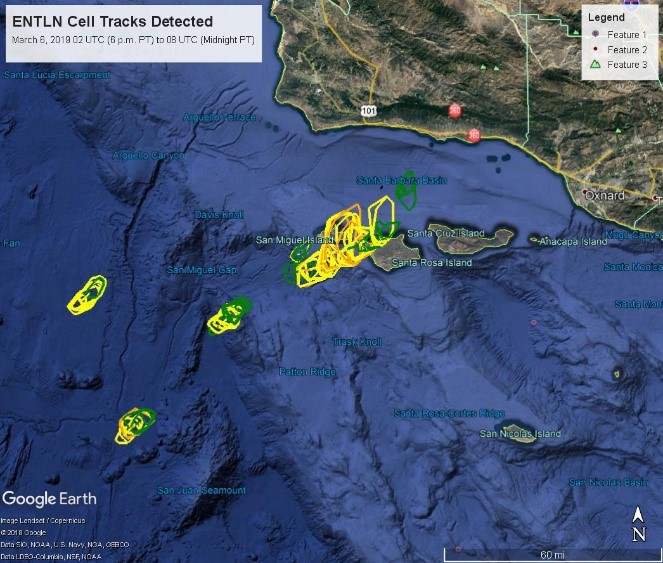 While this was below our threshold to trigger a Dangerous Thunderstorm Alert, it was impressive and rare to see such cell tracks in a very stable atmospheric region.

After checking the cell track data, our meteorologists were pretty surprised!

As we mentioned above, lightning and thunderstorms are rather rare in Southern California and offshore locations. This is due mainly to the predominant cool, California current that flows northward to southward along the Pacific Coast. This current keeps the lower atmosphere rather stable and unfavorable for thunderstorm development.

So what happened on Tuesday?

Our Senior Meteorologist James Aman noted that temperatures offshore of Santa Barbara, CA has been approximately 57 to 58 degrees, per NOAA buoy data. You can see that in the image below. 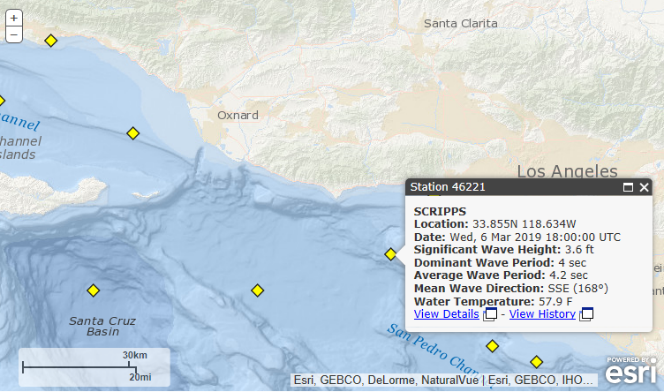 These ocean temperatures are near normal for early March, meaning they’re not blame for the thunderstorm development.

So what did cause these storms?

Our meteorologists believe the main triggers were a strong upper atmospheric trough (low pressure) over the eastern Pacific Ocean. This helped push a potent cold front toward Southern California on Tuesday night.

The Power of Total Lightning Detection 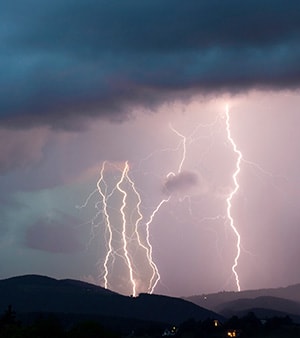 This case shows us that powerful thunderstorms can happen at any time.

The thunderstorms observed on March 5th in Southern California  demonstrate the need for advanced detection and alerting systems.

Notice that we said “detection” rather than “prediction.”

If you would like to learn more about what to look for in an effective lightning solution, please click the button below.

If you would like to read another lightning analysis done by our team of meteorologist and our total lightning network, you can read about the deadly Alabama tornadoes that occured just days before this storm system.

Thanks to everyone on the Earth Networks team who helped this report happen.

open options
The last attempt to connect to our servers failed. Please check your internet connection.