Category 5 Irma Moves to the Northeast of Dominican Republic

UPDATED By Earth Networks Meteorologist, Alyssa Robinette at 8 AM EDT

Category 5 Irma remains a 185 monster as it clips Hispaniola and heads for the Turk and Caicos Islands. Hurricane Watches for parts of Florida are likely to be posted today.

Get a live update today on our Facebook page.

As of 8 a.m. EDT (AST), this major hurricane was located near 20.1 N and 69.0 W. This is about 110 miles north of Punta Cana, Dominican Republic. It is also about 165 miles southeast of Grand Turk Island. Irma is also about 815 miles eat-southeast of Miami.

A strong Atlantic high pressure positioned to the north of Irma continues to guide the storm. The center of Irma will pass very close to the Dominican Republic and Haiti today. This will bring destructive winds, a massive, dangerous storm surge, and rainfall exceeding a foot.

The rainfall could produce flash flooding and mudslides in mountainous areas. Irma will next approach and pass near the Cuba and the Turks and Caicos Islands on Friday, bringing the same severe hurricane conditions. These conditions include destructive winds, flooding rainfall and storm surge.

Category 5 Irma’s top sustained winds remain constant at 180 mph. These speeds make it a severe, chart-topping Category 5 hurricane on the Saffir-Simpson Hurricane Wind Scale. Irma’s minimum central pressure is 921 mb. That is 27.20 inches of mercury. It continues to move west-northwest at 17 mph.

Hurricane Warnings have been issued from:

A Hurricane Watch remains in effect across Cuba from Matanzas province eastward to Guantanamo province.

Tropical Storm Warnings are in effect for: 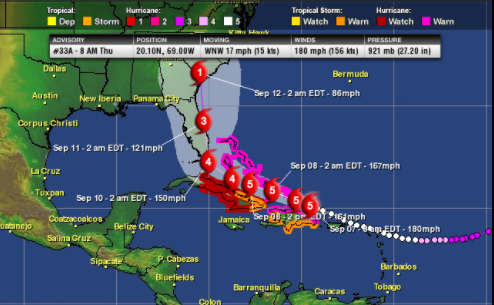 Beyond Friday, Irma could turn more towards the north and impact Florida. This would happen late in the weekend or early next week.

While there is a chance of some fluctuation, warm water along Irma’s path will allow it to maintain its major Hurricane status.

Mandatory evacuations in the western Florida Keys have already been issued and Miami Beach mandatory evacuations start at noon Thursday. Additional orders are likely this afternoon, so please heed the advice of local officials. Don’t wait to evacuate if ordered, because routes could become gridlocked.

The governors of Georgia and South Carolina have declared states of emergency ahead of the approaching storm. Those along the coastal counties should begin reviewing evacuation routes and safety plans.

This storm first formed on August 31, 2017, off the coast of Guinea-Bissau, Africa. The storm then moved steadily across the Atlantic and did not turn north due to its high pressure. Next, the storm underwent rapid intensification after passing over the Cape Verde Islands and became a Category 2 storm just 24 hours after forming. On September 5, Irma became a Category 5 hurricane. The next day, the storm reached peak intensity.

Irma is the second major hurricane (Category 3 to 5) this season, which typically doesn’t occur until October 3.