During the week, we’ll go live at 4 PM EDT. We’ll let you know about weekend times as we get closer. Stay updated & stay safe! You can also watch here:

Chart-topping Category 5 Hurricane Irma will strike the Leeward Islands and the Greater Antilles over the next several days. it will bring dangerous storm surge, destructive winds, and flash flooding. The major hurricane will likely bring problems to the northern Caribbean starting midweek. It will likely bring problems to part of the U.S., possibly south Florida, by later this weekend.

Hurricane Irma’s top sustained winds are at 185 mph. This makes it a severe, chart-topping Category 5 hurricane on the Saffir-Simpson Hurricane Wind Scale. Irma’s minimum central pressure is 926 mb, or 27.34 inches of mercury. It continues to move westward at 14 mph.

#Irma is now a Category 5 hurricane on the Saffir-Simpson Hurricane Wind Scale. Here’s a little more on what that means. #HurricaneIrmapic.twitter.com/05ZGybO64A 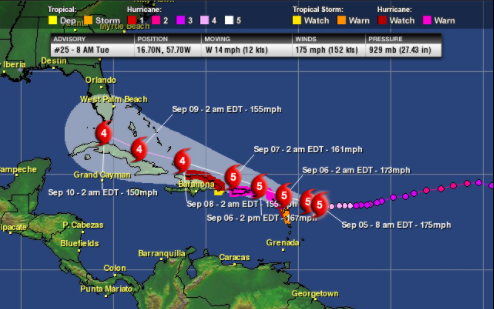 In the United States, the entire state of Florida is currently under a state of emergecny. Key West is currently being evacuated in preparation for the storm.

Hurricane Irma will bring storm surges of  7 to 11 feet, possibly destructive winds, and rainfall exceeding a foot to the Leeward Island later today and Tuesday. The rainfall could produce flash flooding and mudslides in mountainous areas. Irma will approach and pass near the Virgin Islands and Puerto Rico later Tuesday and Wednesday. In those areas, it will bring the same severe hurricane conditions.

A strong Atlantic high pressure positioned to the north of Irma continues to guide the storm. Irma’s center will move very close, if not right over the northern Leeward Islands late Tuesday. It will then likely come very close to Puerto Rico, the Dominican Republic, and Cuba during the midweek.

Following the passage of an East Coast cold front, a high-pressure ridge settling in will help keep Irma on a westward track. This means the southern Bahamas and Cuba could be Irma’s next target Friday into early next weekend. Beyond that, it’s looking increasingly likely that Irma could turn more towards the north and impact Florida late in the weekend or early next week.

Warm water along Irma’s path will allow it to maintain its major Hurricane status. Some fluctuation in strength is possible. A hurricane this intense could lead to catastrophic damage along its path. Therefore, Irma will need to be closely monitored if you live in or have plans in the Caribbean Islands or along the Eastern U.S.

Preparation plans should be developed, including putting together a hurricane survival kit and planning evacuation routes from your area. Multiple routes should be considered in case your preferred one is blocked. If you own a business in a targetted area, it’s important that you take the proper precautions before the storm hits. This business checklist for hurricane preparedness should help you get ready.