Lightning Facts: What is lightning and how does it form? 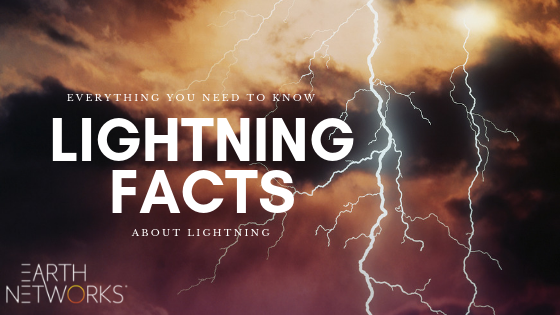 Lightning has long captivated the attention and imagination of human beings.

Whatever the reasons may be, lightning is an inescapable, beautiful, and dangerous condition of life here on Earth.

But how much do we really know about lightning? While some things remain a mystery to even lightning scientists, there are plenty of lightning facts you can (and should) learn about.

Are you ready to become a lightning expert? You can read through our complete guide to lightning facts in about 20 minutes on your lunch break or jump to the section that interests you most! 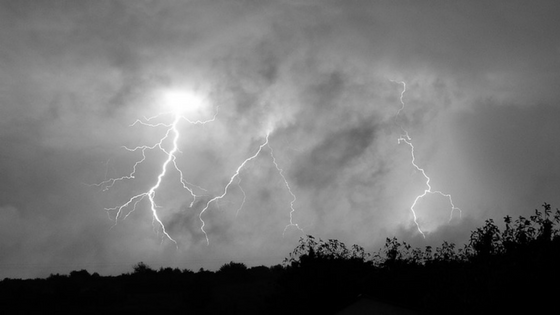 1. Lightning is the most misspelled word in weather. The correct spelling is “lightning” not “lightening”

#LightningFacts Lightning is the most misspelled word in weather. It's #lightning not lightening ⚡️ Click To Tweet

2. At 54,000 degrees Fahrenheit, a lightning bolt is roughly five times hotter than the surface of the sun

#LightningFacts At 54,000 degrees Fahrenheit, a lightning bolt is roughly five times hotter than the surface of the sun ⚡️ Click To Tweet

3. Lightning kills more than 2,000 people per year worldwide. Most of these deaths occur in places without sufficient severe weather alert systems

#LightningFacts Lightning kills more than 2,000 people per year worldwide. Most of these deaths occur in places without sufficient #severeweather alert systems ⚡️ Click To Tweet

5. Lightning can – and often does – strike the same place more than once

Now that you’ve got the lightning fast facts nailed down, you can share them with your friends and family  at your next BBQ or trivia night. Keep reading to become a lightning fact expert!

In the following sections will cover:

Lightning is the occurrence of a natural electrical discharge of very short duration and high voltage between a cloud and the ground or within a cloud. This violent and sudden electrostatic discharge is accompanied by a bright flash and typically also thunder. 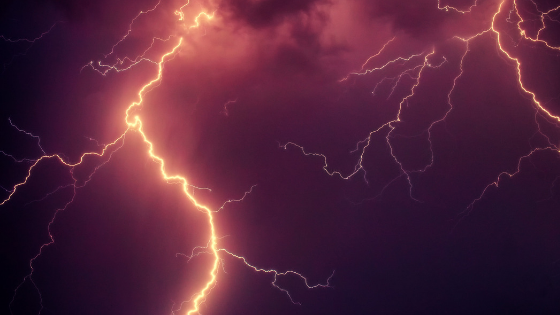 Let’s find out all about lightning. In this section, we’ll answer the following questions:

What Are the Types of Lightning?

Close your eyes and picture a lightning strike.

We bet you’re picturing a bolt that seems to extend from the clouds down to the ground, tree, or building.

The combination of in-cloud lightning and cloud-to-ground lightning is called total lightning.

Total lightning is the complete picture of lightning activity in a region. Total lightning networks detect the most at-risk areas and are able to prompt advanced warnings for thunderstorms and other severe weather events.

Bolt From the blue

While “a bolt from the blue” refers to something totally unexpected it’s also a real type of lightning strike.

This dangerous occurrence is a flash of lightning that extends outward from a storm cell. It can extend so far away from the storm cell that it shows up in an area that isn’t experiencing any other storm conditions. Therefore it can strike unexpectedly somewhere away from the storm where skies are blue and cloudless.

When lightning is nearby, you could also become a victim of side flashes.

The National Weather Service describes this phenomenon by likening the victim to a “short circuit” for some of the energy in the lightning discharge.

Lightning as an Indicator of Severe Weather 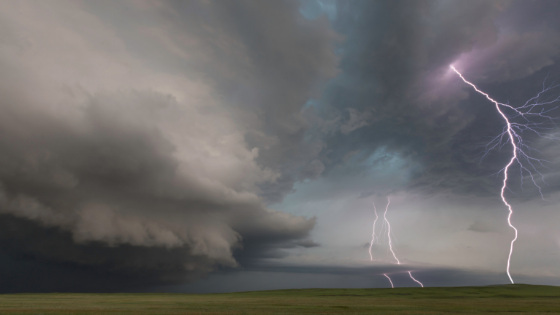 When you break it down, lightning is the most reliable indicator of storms. In fact, lightning is detected in an overwhelming majority of storm reports within a 30 km radius and 45 minutes before and after a severe weather event.

Here are some lightning stats for different types of severe weather:

Lightning is a part of most dangerous and destructive weather events. The image below shows all the tornado and high wind reports from 2013 in the United States with lightning. 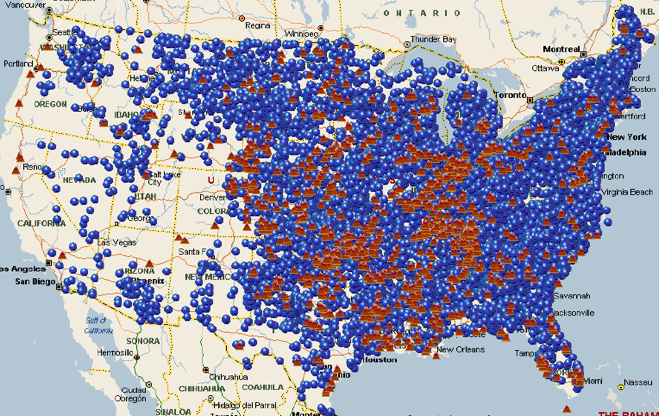 This next one shows the reports without lightning. 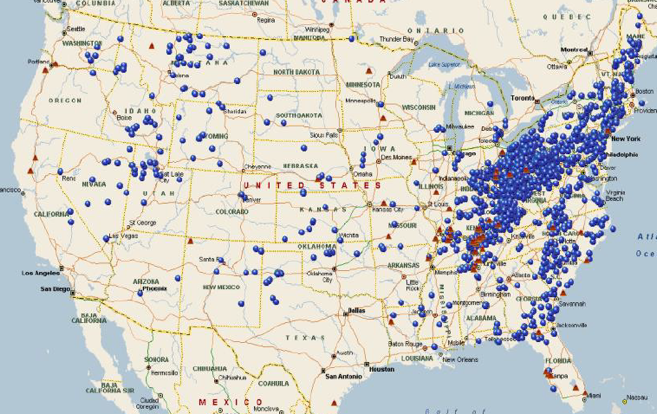 As you can see, lightning is present in a vast majority of severe weather reports.

You can read an example of lightning generating reports for tornadoes in Lee County, Alabama, on our blog.

So how does lightning develop? While scientists aren’t completely sure why lightning happens, we do know how it happens. 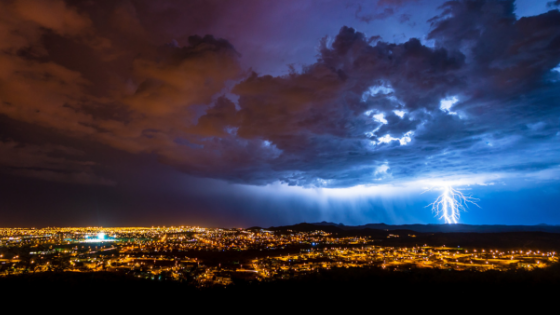 It starts when an electric current forms in a cloud. When the ground is hot, it heats up the air directly above it. As warm air rises, the cloud expands, getting bigger and bigger. However, the whole cloud isn’t warm. In the tops of clouds, temperatures are actually below freezing. It’s so cold that the water vapor turns into ice!

When this hot air and cold air meet, a thunderstorm forms. A lot of tiny pieces of ice bump into each other as they frantically move around within the cloud. This is the beginning of a lightning bolt. These particles slamming into each other create an electrical charge.

Despite the appearance of the lightning strike coming down from the cloud, the positive charge reaching up from the ground is what causes a white hot bolt of lightning to fracture the skyline.

You can do some more reading on lightning basics with our friends at the National Oceanic and Atmospheric Administration.

Thunder: What It Is, What Causes It

We can’t forget about thunder! A lot of people wonder what causes thunder or why it happens in the first place. The answer is: Lightning!

#LightningFacts A lot of people wonder what causes thunder or why it happens in the first place. The answer is: #Lightning! Click To Tweet

Lightning can get pretty hot and it heats up the air channel near it to 18,000 degrees Fahrenheit. This causes the air to rapidly expand and create the loud boom of thunder that you hear during a thunderstorm.

While thunder can be heard from 25 miles away, that doesn’t mean the storm is a safe distance away. Especially since lightning strikes can extend over 10 miles away from a storm cloud. This makes thunder a poor indicator of when to go indoors to safety but if you have no other alerting system, remember: When thunder roars, go indoors!

Now that you understand what lightning is and have some basic lightning facts under your belt from the previous section, let’s move onto lightning safety. In this section, we’ll cover:

When Lightning is Most Dangerous

Most people would think that they’re most at risk during a thunderstorm when it’s directly overhead; However, that’s untrue. By the time a thunderstorm is overhead, most people have already sought shelter.

Believe it or not, there is a “sweet spot” of sorts when it comes to lightning incidents.

The greatest number of lightning casualties happen right before a thunderstorm arrives and right after it begins to depart.

Oftentimes, people do not seek shelter or stop outdoor activities quickly enough to protect themselves from the lightning strikes that occur before the storm arrives.

On the other hand, the appearance of the sun after a storm may lure people out of shelter to resume outdoor activities when lightning is still within striking distance.

That’s why you’re most vulnerable to lightning strikes directly before and  after a storm passes overhead.

Common Side Effects of Lightning Strikes

Lightning is one of the leading causes of injury and death from severe weather. It only takes 3 milliseconds for lightning to travel through your body and while most lightning victims survive, the effects of being struck by lightning can be lifelong. Victims often report a variety of long-term and debilitating symptoms, such as:

In the short term, a person struck by lightning may experience:

These are some pretty serious side effects! It’s best to avoid lightning altogether and seek shelter when severe weather comes to town.

Safety tips are some of the best lightning facts we can share with you, so let’s get review the basics. 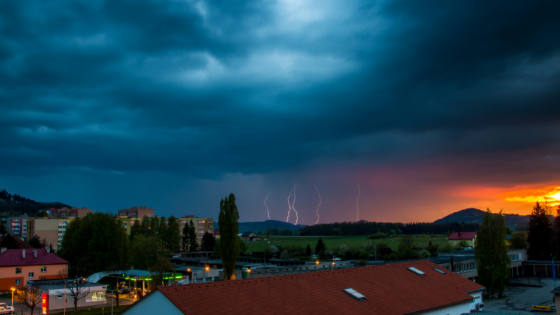 Lightning In The News

Let’s explore the impact of lightning in the real world with some stories in the news. You can use your newly-learned lightning facts to understand these events better.

The Lightning Capital of the World 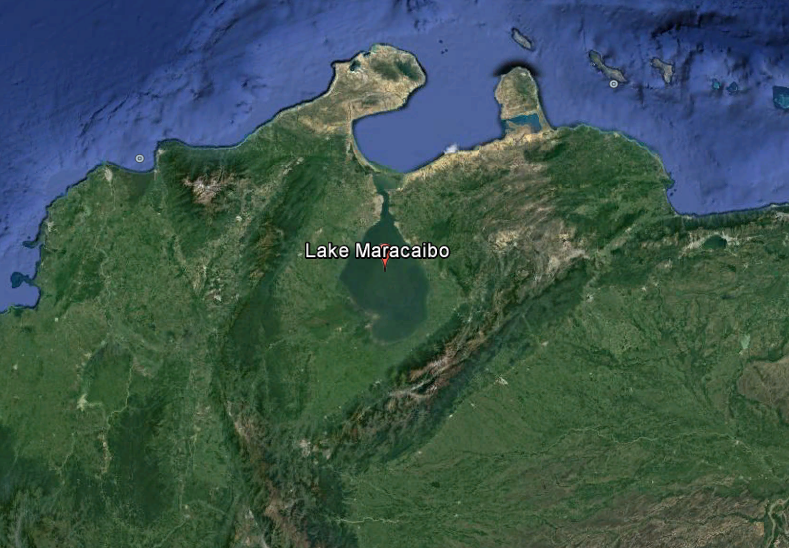 Did you know there’s a place where lightning strikes over 300 days per year? An area of Venezuela known as “Maracaibo’s Lighthouse” is the lightning capital of the world according to NASA. This area sits on Catatumbo Lake and sees so much lightning thanks to its geography near the Equator. When the warm Caribbean Sea and winds from the north collide with the cool Andres Mountain breezes from the south, the area sees optimal conditions for thunderstorm formation.

Lightning can be a real problem for airport operations. A 21-year-old ground crew employee was struck by lightning while backing out a Sun Country Plane at Southwest Florida International Airport in July 2017. The lightning bolt hit the plane’s tail, sending a current through the fuselage. It then knocked the employee off his feet and sent other employees scrambling to assist him. The man survived but the bolt left him with third-degree burns.

Lightning can also be a real problem for parks and recreation facilities. Two teenagers were struck by lightning in an Arizona park in August 2018 when they started going home after noticing rain. One teenager was in a medically induced coma for three days before waking, fortunately without any burns on his body.  He describes being struck as “a burst of heat and then darkness.” We’re happy the two survived! 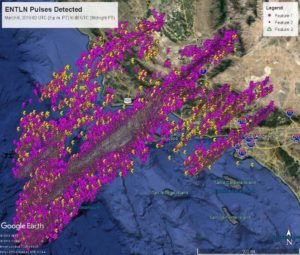 A rare thunderstorm event in Southern California generated 20,249 total lightning pulses in a 6-hour period in March 2019. A strong atmospheric trough (low pressure) off of the eastern Pacific Ocean helped push a potent cold air front toward Southern California to cause this lightning event.

Scientists have for the first time captured the cracking sound of volcanic thunder. Sometimes ash clouds rising from volcanoes contain lightning, which observers previously said produced an eerie popping sound. But in 2018 scientists managed to record the thunder produced by the Bogoslof volcano in Alaska for the first time.

One beach-goer unfortunately lost their life on June 24, 2018 when they were struck by lightning. We sent out three Dangerous Thunderstorm Alerts prior to the deadly incident. 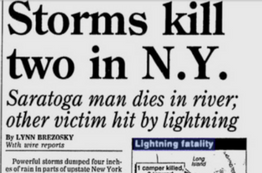 Our very own Brian Smack, a manager on our club safety team, is a lightning strike survivor. He was camping with three others when a sudden storm approached. Lightning struck their tent platform, knocking Brian out. The bravery of two others in his group saved his life.

It’s harder than you might think to make a great video about lightning. Here are some of our top favorites:

The most lightning-struck place on earth (TED-Ed) – This short history lesson explains the wonders of a special place on Earth where lightning strikes 200 days out of the year.

For Kids: What causes thunder and lightning? (SciShow Kids) – Teach your kids about lightning with this short video from the SciShow Kids channel.

Questions about lightning? Ask the experts!

Now that you’ve reached the bottom of the page, you should be an expert on lightning. Test you knowledge with the 5-question quiz below. And if you have any lingering questions about lightning that you’d like our team of professional meteorologists and lightning scientists to answer, please leave them in the comments below.