A tornado outbreak throughout the US caused mass damage on February 28, 2017. While the outbreak of tornadoes and thunderstorms is not rare, it is uncommon to see an event of this proportion during the winter. The storms ripped through several states, killing three and scattering vehicles across highways. The storm below destroyed eight homes and just missed an elementary school.

Three bands of storms moved eastward across the midwest during the afternoon and evening hours. The National Weather Service said it received more than 20 reports of tornadoes or possible twisters ripping through parts of Iowa, Missouri, Illinois, Indiana and Tennessee on Tuesday. The next day they also received reports of at least tornado in eastern Kentucky and West Virginia. 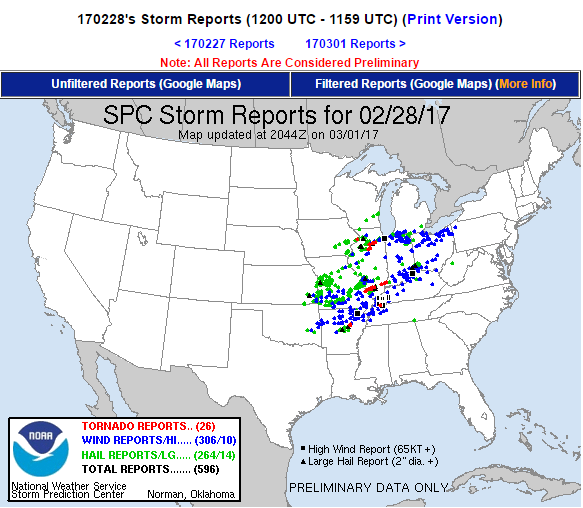 After assessing our cell tracks for Tuesday, we found that our detection lines up very well with NOAA’s tornado map. 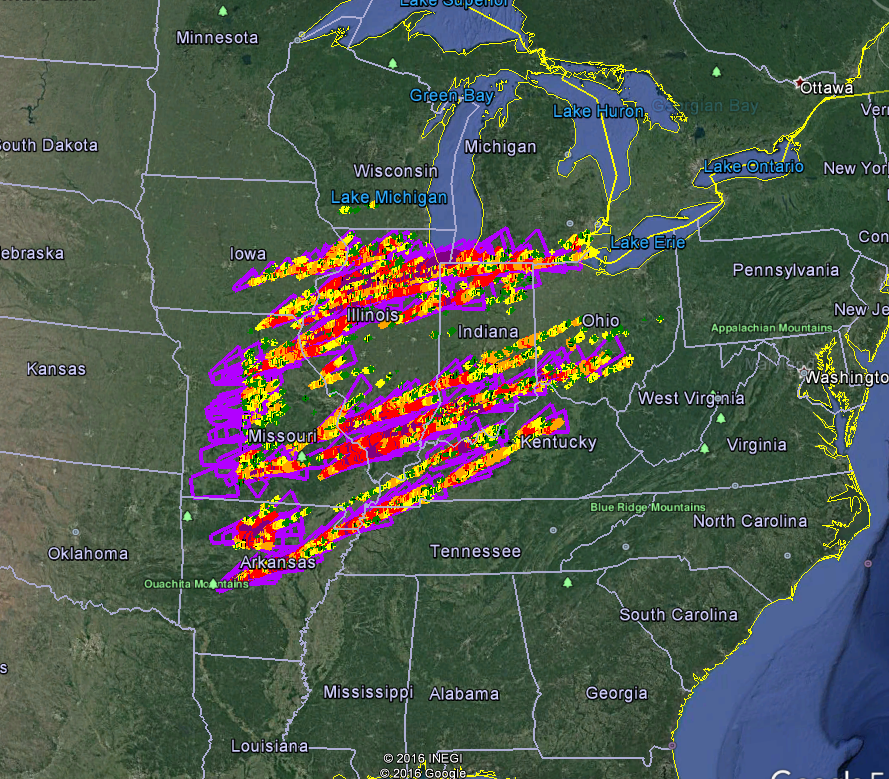 On Wednesday morning, the below tornado tore through a community just south of Nashville, Tennessee.

NEW: Stunning video of this #tornado warned storm system as it pummeled parts of Franklin this morning @NC5 pic.twitter.com/eYti91IyTZ

Our total lightning network generates advanced thunderstorm warnings called Dangerous Thunderstorm Alerts (DTAs). On Tuesday, our lightning detection generated over 50 DTAs in under 24 hours in the state of Missouri alone. In total, we sent out 275 DTAs between 28 February and 1 March in the US’s midwest and southeast. Below you can watch as the alerts (represented by purple polygons) follow the strongest storm cells across the center of the US.

Missouri and Illinois saw most of the storm systems including tornadoes. Scenes from Perryville, MO show a path of complete destruction left by the tornado outbreak. After the tornado cleared out, the community was rocked by the death of one and the injury of 10 others.

As storms continue to rip across the Southeast and Midwest, it’s important to brush up on tornado safety. After you observe a tornado warning, get to shelter. Go down into a basement. If there is no basement available, move quickly to a room in the center of the building on the lowest floor. During the storm, remember to stay away from windows, doors and other openings.

The worst place to be during a tornado is in a vehicle. Tornadoes easily and often toss cars and busses. Never try to outrun a storm. Tornadoes are faster than you think.

Incredible video shows tornado that touched down in Illinois as severe storms move across parts of Midwest. https://t.co/i0ilDbyvPj pic.twitter.com/atB5EIfdSR

After the storm passes, continue to monitor the situation. Check for injuries and be on the lookout for hazards like broken glass and downed power lines. If you suspect any damage to your home or building, turn off the electricity and gas lines until inspection.