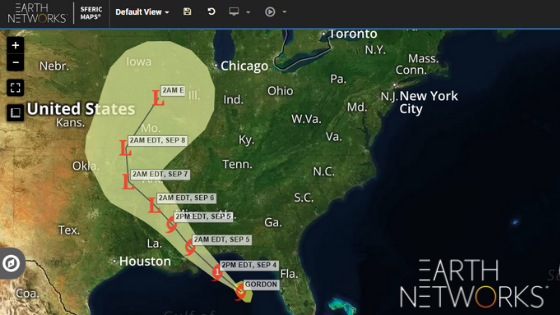 Tropical Storm Gordon continues to churn northwest across the Gulf of Mexico. It’s set to target the central Gulf Coast later this evening. You can see the current position and forecast for Gordon above in a screenshot from our weather visualization tool, Sferic Maps. Track the rest of the Atlantic Hurricane season with a free trial of Sferic Maps – Just fill out the form below!

Further strengthening is possible today. By the time Gordon makes a likely landfall between Louisiana and the southern Alabama Coast, it will likely be a weak Category 1 hurricane.

Tropical Storm Warnings are in effect for west of the mouth of the Pearl River to east of Morgan City, Louisiana to the Alabama-Florida border and to the Okaloosa-Walton County line. This area includes:

The National Weather Service issued a Hurricane Warning  for the mouth of the Pearl River to the Alabama-Florida border as further strengthening is expected over the next 36 hours.

Depending on its exact track, residents from the Mississippi Delta to the Alabama coast could expect:

According to our meteorologists, this much rain in a short period of time is likely to cause flooding. This is especially true because Gordon is coming on the heels of another soggy storm that is over the Gulf. 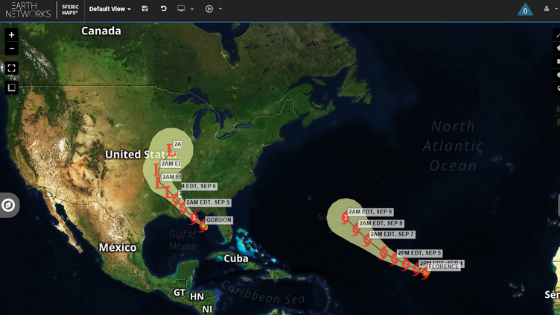 It’s imperative to watch the track of Gordon and be prepared for any shift in track or intensity. With a very warm Gulf lying ahead of the storm, the potential exists for more development.

Make hurricane preparations now. This includes knowing multiple evacuation routes from your neighborhood. Ensure you listen to local officials and keep a battery-powered radio on hand.

The early part of September is the climatological peak of the tropical season. Like clockwork, the season is responding. Another tropical storm, Florence, is wandering the eastern Atlantic tonight far away from land mass.

Stick with Earth Networks for the latest Gordon updates and stay safe!