The 2019 hurricane season has been relatively quiet so far, but will it stay that way?

The 2019 hurricane season has been quiet so far, but @NOAA doesn't expect it to stay that way. Click To Tweet

But what do the Earth Networks Meteorologists think?

Join us for the Earth Networks 2019 Hurricane Mid-Season Outlook Webinar to learn what our forecasters are expecting. 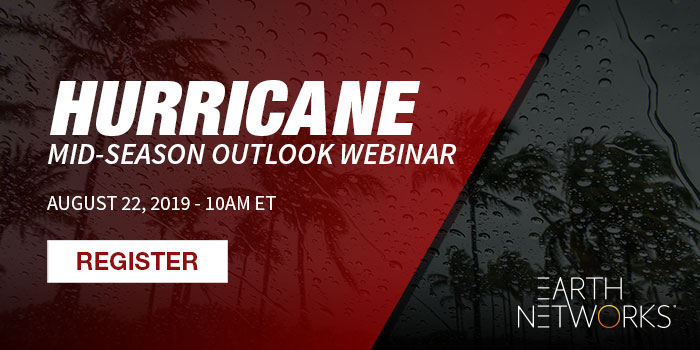 Earth Networks Meteorologist, Anthony Sagliani will present our Meteorology Team’s 2019 Mid-Season update on Thursday, August 22. The 30-minute presentation will start at 10 AM ET and is totally free.

As with all of our webinars, feel welcome to bring your own questions for a Q&A session.

So What Did NOAA Have to Say?

During their outlook in May, seasonal forecasters with NOAA’s Climate Prediction Center forecasted a 30% chance for an above-normal Atlantic hurricane season.

With their latest update on August 8, these same forecasters increased the likelihood to 45%.

NOAA’s number of predicted storms also increased. NOAA now expects 10-17 named storms (winds of 39 mph or greater). This is a slight jump up from their initial prediction of 9-15 named storms.

They believe 5-9 of these named storms will become hurricanes (winds of 74 mph or greater), which is slightly higher than the initial prediction of 4-8.

Their major hurricane prediction remains the same at 2-4 storms of category 3, 4, or 5. These storms have winds of 111 mph or higher.

Remember, NOAA’s hurricane season outlook is for overall seasonal activity and is not a landfall forecast. Landfall depends on short-term weather patterns, which are only predictable within a week of the storm potentially reaching a coastline.