2017 continues to be a devastating year for wildfires in California.  Powerful Santa Ana winds and a lack of rain and humidity are to blame for the latest outbreak of wildfires in Southern California.

The fires, located primarily in Ventura County, have already burned more than 65,000 acres according to CNN. As of right now, the separate wildfire count is at five. As of Wednesday, December 6, 2017, the fire has reached the Pacific Ocean.

Ferocious winds in Southern California whipped up an explosive wildfire that quickly tripled in size, forcing the evacuation of thousands: https://t.co/HGQri9p0rH pic.twitter.com/ecDAto6MSa

Fire Weather Warnings are currently in effect along the southwestern coast form the Santa Barbara area to the Mexican Border. These National Weather Service warnings are visible on our Sferic Maps weather visualization software.

More than 38,000 people in Ventura the city had to evacuate. Officials estimate that 150 buildings in Ventura alone are destroyed. In Los Angeles, Mayor Eric Garcetti said about 150,00 people in Los Angeles were affected by evacuation orders for another fire.

Over 1,100 personnel are working to fight the flames and officials fear the fires could burn for days to come.

According to Southern California Edison, approximately 43,000 homes are without power as of Tuesday night. As the fires continue to spread, more outages are likely. This is because the fires burn power transmission paths. 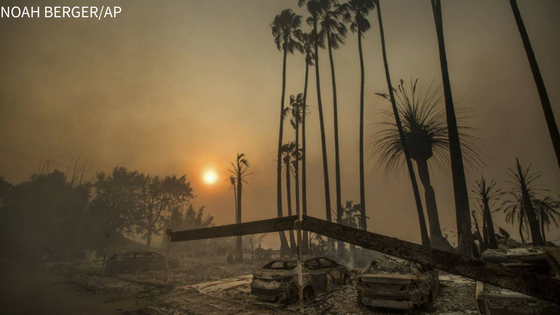 Wildfires are scary and can be unpredictable. When conditions are right, it’s extremely difficult for firefighters to control the blazes. When a wildfire is in your area, there are a few things you can do to ensure your safety and the safety of the people you love.