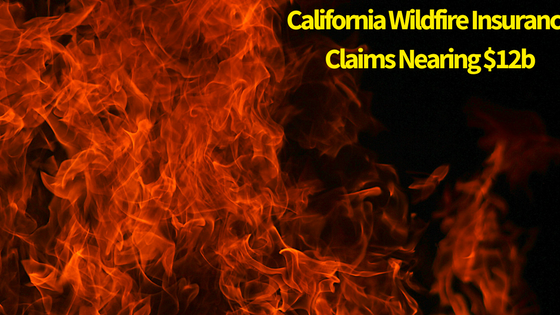 2017’s California wildfire insurance claims exceeded the total insurance claims from the top 10 previously most costly wildfires in the state. If that doesn’t do justice to just how devastating last year’s fires are, we don’t know what will.

While California is used to having wildfire season start in the late summer or early fall, the year was uniquely horrible in the amount of damage it created. If we treat the wildfires, which spanned from October to December, as one disaster, they “represent one of the most damaging natural catastrophes in California history,” according to Insurance Commissioner, Dave Jones.

It’s important to note that these totals do not reflect the other weather-related disasters. California also experienced mudslides in Montecito when torrential rain fell on the hillsides burned in the December fires.

A series of fires in the month of October alone caused California wildfire insurance claims of $10 billion.

Nearly $1.8 billion of the 2017 insurance claims stem from fires that swept through Southern California in December.

There are plenty of assets that wildfires can damage and destroy while ablaze. During 2017’s wildfire season, the combined firestorms damage or destroyed 32,000 homes, 4,300 businesses, and more than 8,200 vehicles, boats, and other equipment.

Insurance companies have a few different options to mitigate the wildfire risk. They can refuse insurance to homeowners and businesses located in areas with a high fire risk. However, they can also invest in severe weather data to help increase their computer models that assign fire risk scores. That way, you can make market-specific product offers and reduce claims by alerting policyholders of potentially damaging wildfires in their area. If you’re an insurance company that would like to learn more about  how severe weather tools can help you mitigate risks for policyholders, please get in touch with us today.

It’s important for businesses in wildfire-prone areas to have not only a business owner’s policy but a business income, or business interruption insurance (BI). BI covers the profits your business would have earned and the additional operating expenses incurred as a result of the disaster.

Starting in October, wildfires tore through much of California. This season was particularly bad thanks to dried out vegetation, the Santa Ana Winds, and the Diablo Winds. In early October, the Diablo Winds of northern California developed and it was all downhill from there. The powerful wind gusts spread massive wildfires across California’s renowned wine county. Unfortunately, wildfires would continue to burn across the state until the New Year. Besides causing property damage, the fires were also deadly. The blazes killed dozens of people.

When all was said and done, the fires burned over 282,000 acres in Ventura and Santa Barbara counties. This became the state’s largest wildfire acreage in history with an acreage larger than the city of San Diego.