Catatumbo Lightning Lake – Where Lightning Strikes Over 300 Days Per Year

The village of Congo in Venezuela, which sits on the shore of Lake Maracaibo, is known by many names. “Maracaibo’s Lighthouse” and “the Never-Ending Storm of Catatumbo” are both used to describe the area where lightning strikes over 300 days per year. But the most impressive name by far, is the one NASA awarded the area with: “The Lightning Capital of the World”.

From April to November, locals in Congo can expect to see lightning 80% of the year, an average of 297 days according to the Bulletin of the American Meteorological Society. The lightning phenomenon in Venezuela is so frequent that it draws in tourists to the area to look on to the lightning show that locals see nearly every night.

One of the most recent lightning shows on Lake Maracaibo happened on 1 September 2016. In a 12-hour period, Earth Networks Total Lightning Network™ detected 5,250 total lightning strikes over the lake, which is fed by the Catatumbo River.

In the video above, it is easy to see how quickly the strikes add up once the storm cells hit the lake. The high frequency of both in-cloud (purple) and cloud-to-ground (yellow) lightning strikes generated three Dangerous Thunderstorm Alerts. The alerts, often called DTA’s and represented by the purple polygons in the video above, are used to warn people of approaching severe weather conditions.

Why does lightning strike here so often and so violently? Lake Maracaibo’s unique geography and climatology are to blame for its near-perfect lightning conditions. When the warm Caribbean Sea winds from the north collide with the cool Andes Mountain breezes from the south, optimal conditions are created for the development of thunderstorms. 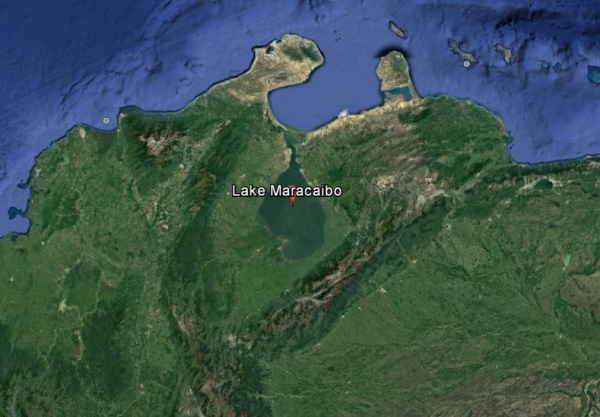