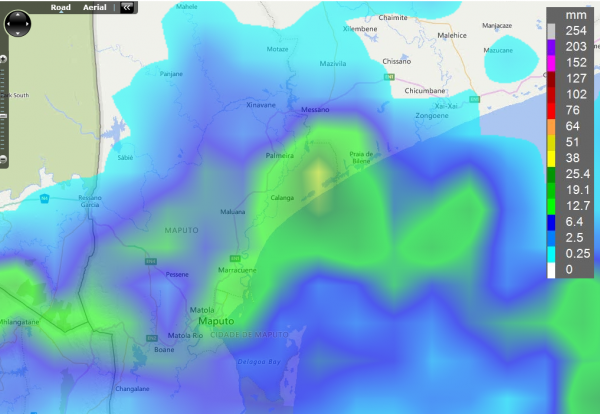 A strong system of storm cells rolled through the eastern coast of Mozambique on 24 October, 2016. Heavy rain fell for over 40 minutes as the storms slowly moved through the area, bringing with them strong gusts of wind and dangerous cloud-to-ground lightning strikes. Our radar alternative image above shows areas of Southern Mozambique, shown in yellow, receiving over 30mm of rain.

The purple polygons in the video above represents four Earth Networks Dangerous Thunderstorm Alerts (DTAs). Earth Networks Total Lightning Network automatically generates DTAs where high frequencies of in-cloud lightning are detected. After high frequencies are detected, these alerts are sent out to warn of the potential for a storm that could not only include dangerous cloud-to-ground lightning strikes, but also microbursts, hail and other severe weather conditions.

The Club of Mozambique reported that the storm destroyed over 400 homes, with the majority of the damage occurring in Maputo province. The storm also damaged or destroyed approximately 22 classrooms and 12 health centers. High winds from the storm made some roads impossible to cross after knocking down traffic lights, trees and billboards. Flooding rivers made other roads impassable as well.

The storm’s lightning and resulting downed trees took the lives of 12 people in Maputo city and province. In the capital, four civilians died when falling tree branches crushed the vehicles they were traveling in. According to the Council of Ministers spokesman and the Deputy Minister of Health, six others died throughout various parts of the province. The storm also injured 30 other people.