Our total lightning network tracked the deadly Easter tornadoes as they ripped through the South on Sunday, April 12, 2020. This tornado outbreak led to several fatalities in hard-hit areas like Mississippi and extensive structural damage in Louisiana.

Full res image of the nearly mile wide tornado as it approached i59 in Heidelberg, MS #MSwx pic.twitter.com/tbxLHoZeDS

There were over 60 reports of tornadoes that began on Easter Sunday and spilled over into Monday, April 13, 2020. This destructive path tore through Texas, Arkansas, Louisiana, Mississippi, Alabama, Georgia, the Carolinas, and south Tennessee.

Some of the hardest hit areas include east of Monroe, Louisiana and northwest of Hattiesburg, Mississippi. Keep reading to gain a deeper understanding of what happened and watch how our total lightning network tracked these powerful and tragic storms.

Be prepared for the risk of severe thunderstorms, tornadoes, heavy rainfall, and strong winds over a large portion of the southern and eastern U.S. into Monday. pic.twitter.com/TajiDaCtKk

The tornadoes that happened east of Monroe, Louisiana leveled approximately 300 homes. Thankfully, there were no major injuries or fatalities reported from Ouachita Parish (home to Monroe, La.). The red triangles in the image below depict National Weather Service (NWS) tornado reports. 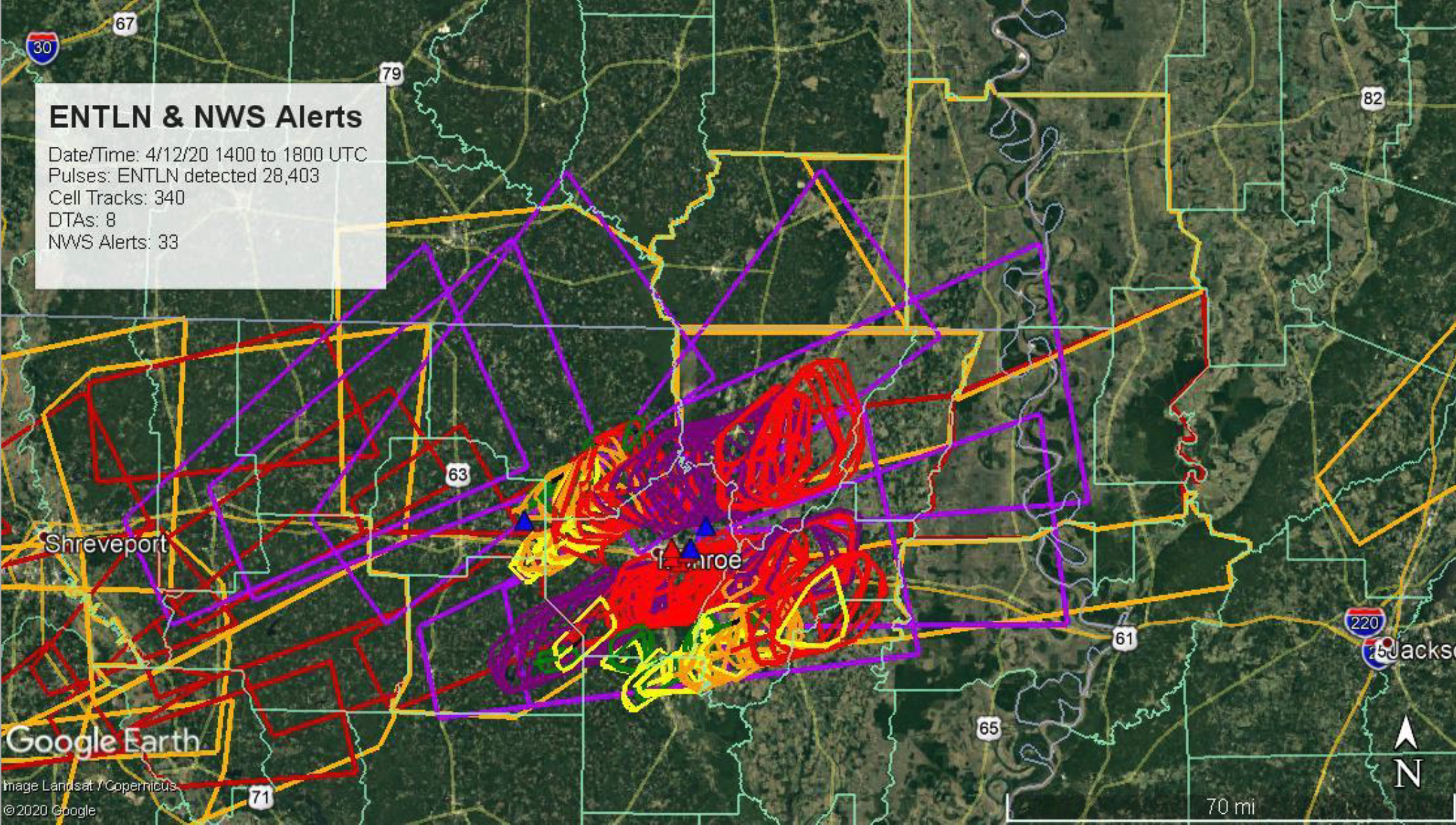 Press play on the video below to see the storms in action.

In-cloud lightning plays an integral role in anticipating tornadoes. As you can see from the image below, most of the lightning pulses in these cells were in-cloud (magenta). It’s in-cloud lightning that powers DTAs and other life-saving weather alerts that give people more time to seek shelter. 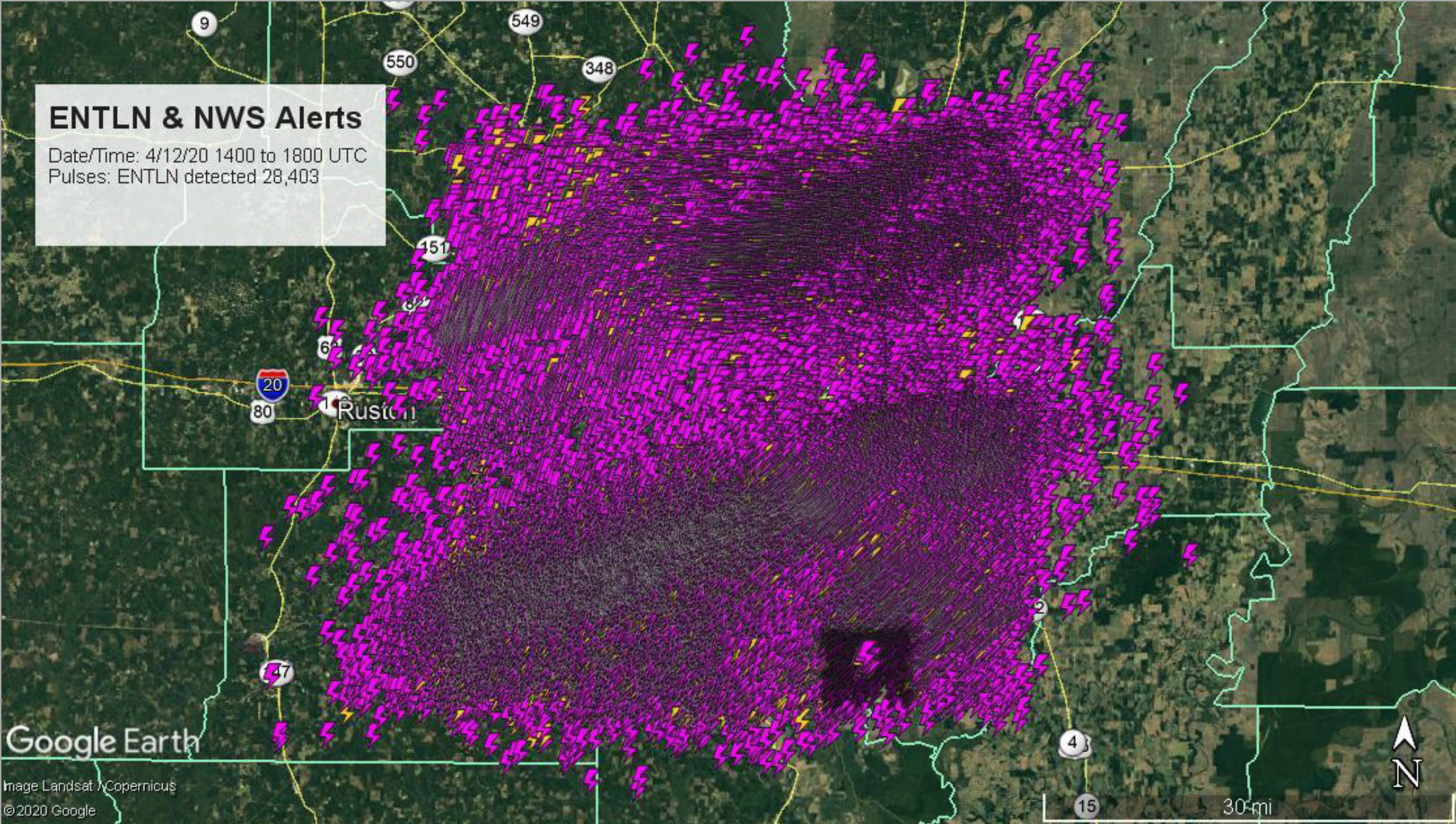 When the Easter tornadoes reached the area surrounding Jefferson Davis County, the conditions killed 11 people and damaged at least 20 homes.

Press play on the video below to watch the total lightning, NWS alerts, and DTAs during the storms.

This lightning happened in 935 storms with maximum flash rates of 50 per minute. This lightning activity generated 11 Earth Networks DTAs and 73 NWS alerts including: 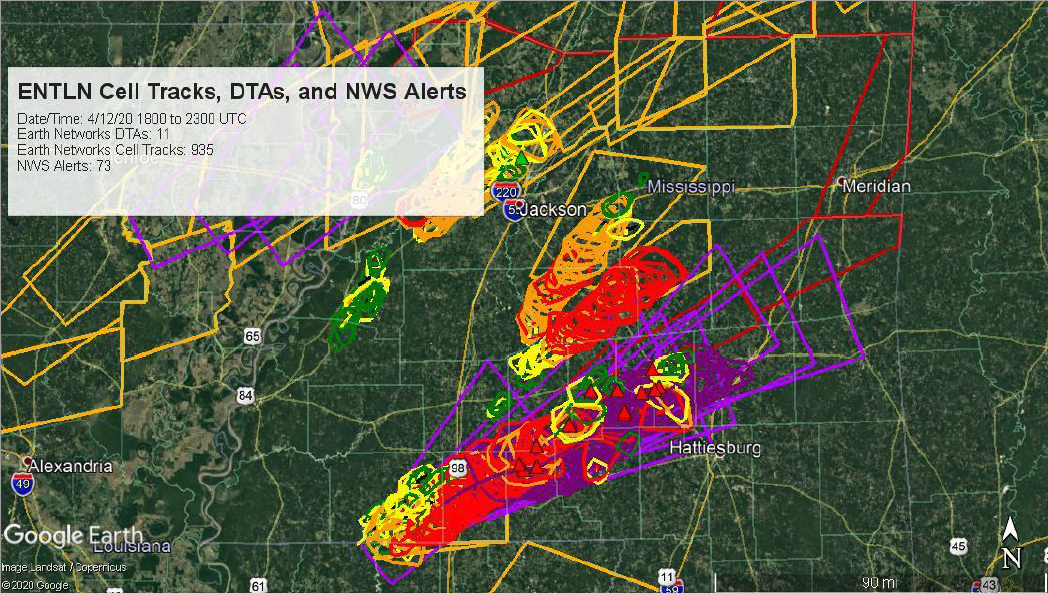 Our thoughts are with those who lost their lives over the weekend. We are also thinking of those who are still dealing with the aftermath of these Easter tornadoes.

Spring is a time of enhanced tornadic activity in the U.S.

The best way to stay safe when tornadoes are likely is to prepare. You can learn more about tornadoes on our Tornado 101 page. Stay safe out there!

This data was generated by the Earth Networks Total Lightning Network and extracted by Earth Networks Meteorologist and Program Manager, Steve Prinzivalli. Thanks for all your hard work, Steve!