7 FAQs About the First Day of Winter

Do you have questions about the first day of winter or the winter solstice? We have the answers! Keep reading to become a winter solstice expert so you can impress your friends, family, and colleagues this holiday season.

1. When does winter officially start?

Well, this really depends on who you ask. The official first day of winter is the winter solstice, which falls on December 21st each year.

The winter solstice isn’t just some random day. It marks an astronomical phenomenon. This is the day with the shortest period of daylight and the longest night of the year. In the Northern Hemisphere, this is winter and in the Southern Hemisphere this is summer. If you want to get technical, it’s not a day at all. It’s much smaller than that. The solstice is the moment when the sun’s maximum elevation is lower than any other day of the year.

3. Why is the first day of winter the shortest day of the year? 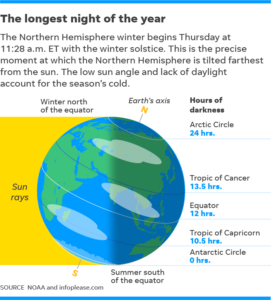 The earth is closer to the sun in the dead of winter than on any other day. That means, it technically takes less time for us to orbit the sun, resulting in less sunlight and a longer night. But don’t we orbit the sun in a circle?

Nope. You can really intrigue your friends and colleagues with this next winter solstice fact. The Earth orbits the sun in an elliptical, or slightly oval-shaped pattern. If you want to read more into this, we recommend this explanation. But that really should be all the information you need to get a slight understanding of the extended period of darkness we get on the first day of winter.

4. So what happens after the solstice?

Besides the heightened probability for winter weather conditions throughout the Northern Hemisphere, after the solstice the sun beings to return! That’s right, the days start getting longer again. This is a particularly good sign for those who suffer from Seasonal Affective Disorder (SAD).

If you didn’t know already, the lack of sunlight can be detrimental to human health. In the winter, it’s a good idea to take vitamin D and keep an eye on your mood. You can learn more about SAD on the National Institute of Mental Health’s website.

5. Who started celebrating the winter solstice?

If you look back on the history of the first day of winter, you’ll find that it’s celebration is an old tradition. Early humans used astronomical events to guide activities like the mating of animals, the sowing of crops, and the monitoring of winter reserves of foods. Remains of Neolithic and Bronze Age archaeological site, like Stonehenge, prove this fact. Stonehenge was carefully aligned on a sight-line pointing to the winter solstice sunset.

Back then, people celebrated the solstice as a time to slaughter the last of their cattle, to feast, and to celebrate that most of their wine and beer was normally ready to drink on this day.

Speaking of Stonehenge, you can still celebrate the solstice there. There is a heavier emphasis on the idea of “new beginnings” and more people show up to the summer celebration.

Do you celebrate Christmas? Then you’re celebrating the winter solstice in a way. The traditions of a Christmas tree, Yule log, and wreath come from Yule.

7. Is the solstice the coldest day of the year?

No. Just because it’s the first day of winter does not mean it’s the coldest day of the year. While there is less sunlight, that’s not normally enough to send temperatures to their coldest for the season. The Northern Hemisphere normally sees it’s coldest days in January and February. If you’re interested in learning more about what weather this winter has in store for you, check out our Winter Weather Outlook Webinar, presented by our wonderful meteorologists.