Flashback Friday: Wild 2016 for US Weather

This flashback Friday, our meteorological team gathered the wildest incidents of US weather throughout 2016. Our weather timeline highlights the most memorable swings in extreme weather throughout the states. While the first half of the year experienced crippling snow, extreme floods and record warmth, the second half was just as memorable with more flooding, an active hurricane season, drought and an Arctic chill. 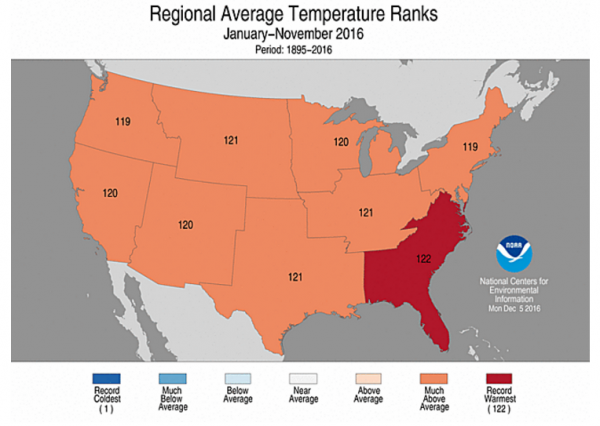 One of the most important consequences of the US’s wild weather this past year is that 2016 will likely end up as one of the top five warmest years on record. Through the end of November, the US’s average temperature was just 0.1 degrees Fahrenheit shy of the warmest year on record, which was 2012. A handful of states experienced their warmest year yet, including: Alaska, Georgia, Montana, North Carolina, North Dakota, South Carolina and Virginia.

Let’s use this flashback Friday to take a look back on the weather events that shaped the US in 2016: 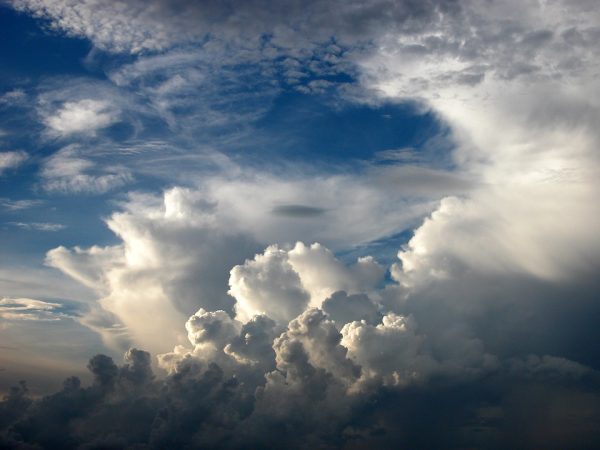 In January, the fourth largest winter storm since 1990 shut down most of the East Coast shortly after the start of the New Year. Often referred to as “Winter Storm Jonas,” this storm dropped more than 20 inches of snow on over 21 million people in the Northeast by its conclusion on January 24. 11 states and Washington D.C. declared a state of emergency as the storm killed 40 people. Other impacts included over 13,000 flight cancellations and power outages for over a quarter of a million people.

Does any one remember how warm and dry last February was? February 2016 was the 7th warmest on record in the US, with an average temperature of 39.5 degrees. In Alaska, warm temperatures made last February the warmest on record while the overall spike in temperature made Winter 2015-2016 the warmest ever. Not only was the month very warm, but it was very dry as well. NOAA recorded alarming precipitation figures across the US.

The next month, heavy rainstorms invaded the Lower Mississippi Valley. The rain shattered precipitation records. Little Rock and Memphis experienced their wettest March on record with 12.33 inches and 16.20 inches respectively. As a result, tremendous flooding occurred. The flooding from the Mississippi River delta killed four people and destroyed 300 homes. The Sabine River crested at 33.24 feet on March 15 and destroyed 400 homes in Louisiana and Texas.

In April, more flooding spread throughout Texas. A large low pressure pushed into the central US during the middle of the month and produced heavy rain in the Houston area. On April 18, 15 inches of rain fell at a very fast rate of 4 inches per hour at times. The resulting flooding killed 8 people and forced the rescue of 1,200 people from their homes. After the flood, the damage was startling. 100,000 people had no power, more than 600 flights were cancelled and the damage estimate sat somewhere near $5 billion.

The rain continued in May when a separate storm system dumped 4 inches of rain on Houston between the 26-27. The 2.64 inches of rain that fell on May 27 actually set the daily rainfall record for the city. At least six people died in the flooding from this storm. The rain in this region of the US was more than double the average for April and May.

By the start of summer, flooding moved from the southern Plains and Lower Mississippi Valley over to the Mid-Atlantic. Intense thunderstorms produced 8-10 inches of rain on June 23 in West Virginia. This rainfall resulted in the third deadliest flooding in the state’s history – 23 people died. The waters destroyed 1,2000 homes and officials had to rescue more than 60 people by boat. The devastation of the flood was multiplied by the fact that only 2% of families affected actually had flood insurance.

As the summer continued, flooding moved up the coast to Maryland. Localized heavy rain pushed through the Mid-Atlantic region on July 30 and swamped Ellicott City. More than 6 inches of rain fell in just a couple of hours. Since Ellicott City is located in a deep valley, deadly flash flooding occurred. Two people died and flooding produced at least $22.4 million in damages. Emergency officials responded to 120 water rescues as the flood waters destroyed more than 100 homes and 170 vehicles.

As if Louisiana hadn’t seen enough flooding in 2016, August saw up to 30 inches of rain in Baton Rouge within just a few days. A stationary storm system caused relentless rain over southern Louisiana during the week of August 8. The Red Cross declared the event the worst disaster to hit the US since Hurricane Sandy. The storm caused flooding that killed thirteen people and produced more than $10 billion in damages. The flood waters damaged more than 60,000 homes and emergency officials had to rescue over 20,000 people and 1,000 pets from the waters. The governor of Louisiana declared a state of emergency.

Next, the US saw what started out as a tame hurricane season quickly ramp up in September. Hurricane Hermine formed in the Gulf of Mexico on August 28 and made landfall on the Florida Panhandle on September 2. Hermine was the first hurricane to make landfall on Florida since Hurricane Wilma over a decade ago in 2005. The Category 1 hurricane’s arrival on Labor Day weekend ruined travel plans and damaged over 200 homes. The high winds and heavy rains killed two and left more than a quarter of a million people without power.

In October the hurricane season continued for the US with Hurricane Matthew. This deadly storm formed in the Atlantic on September 27 and rapidly intensified as it passed through the warm Caribbean. By the 30th, Matthew intensified to a major Category 3 hurricane with winds up to 120 mph. After destroying many parts of Jamaica, Haiti and Cuba, Matthew hit Florida’s Atlantic Coast. Strong storm surge, intense wind gusts and torrential rain wrecked havoc on the Southeast Coast before Matthew made landfall on October 8 in South Carolina.

Once it made landfall, it quickly dissipated but the damage was lasting. Hurricane Matthew produced more than $6 billion in damages in the US and left more than one million people without power. Emergency officials responded to nearly 900 flood rescues in North Carolina. In the end, 49 people in the Southeast died as a result of the hurricane. As bad as these results were, the storm damaged the Caribbean much worse.

Large wildfires in the Southeast define November 2016. An intense southeast drought fueled the second largest number of wildfires in one moth ever recorded in the US. A total of 8,560 wildfires burned more than 275,000 acres. One of the worst fires burned 17,586 acres in the Great Smoky Mountains. Strong winds allowed the fire to grow out of control and sweep through Gatlingburh, TN. The fires injured more than 100 people, killed 14 and destroyed approximately 1,400 buildings by November 28.

The last month of 2016 was unlike the rest. The US quickly jumped into the meteorological winter headfirst with multiple Arctic plunges throughout the country. These temperatures produced several daily cold weather records in locations in Colorado and Montana. In Montana, Belgrade Field, Dunkirt, Ennis and Valentine all stayed at least 31 degrees below zero for a high temperature. The cold was followed by the season’s first snow across the northern tier. On December 5, 6.4 inches of snow slammed Chicago and broke the daily snow record for the city.

Did We Miss Any Wild Weather?

Each section of the US experienced different weather events throughout 2016. This list represents the most memorable throughout the country for each month. If you think we forgot something important, please explain the weather event in the comments below!