Harvey, now a Category 2 hurricane, is continuing to rapidly intensify. The storm and could make landfall along the Texas Gulf Coast as a major hurricane with winds in excess of 120 mph. Life-threatening inland flooding and a significant coastal storm surge are major risks.

As of 7 am CDT, Hurricane Harvey was located near 26.3 N and 95.8 W. This is 140 miles southeast of Corpus Christi, Texas and about 145 miles south-southeast of Port O’Connor, Texas. Harvey’s top sustained winds are now 110 mph. This makes it a strong Category 2 hurricane. It’s currently moving northwest at 10 mph. Its minimum central pressure of 950 mb, or 28.05 inches of mercury. If you’d like to compare this to yesterday’s data, please check yesterday’s Harvey blog post. 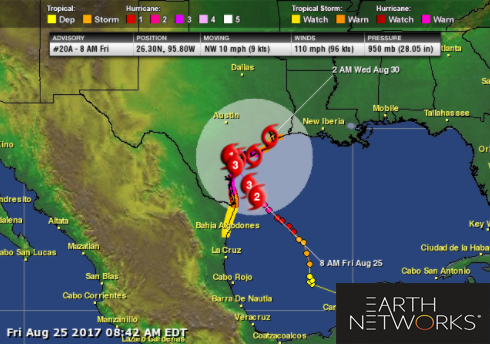 Hurricane Harvey is becoming better organized. Rapid intensification is likely today as it moves across the very warm waters of the western Gulf of Mexico. By later today, the upper-level environmental will become more favorable for faster strengthening. Upon its approach toward the Texas Fuld Coast, it will likely be a major hurricane with top sustained winds exceeding 115 mph. Wind speeds of 130-plus cannot be ruled out with this system.

Hurricane Harvey’s impacts will be significant. The two main impacts are heavy rain and high storm surges. Rain totals along the Texas Gulf Coasts and inland areas of southern and eastern Texas may reach 15 to 25 inches. This includes the greater San Antonio, Corpus Christi, and Galveston areas. Current forecast call for Harbey to stall just inland of the Texas Gulf Coast this weekend. We may see significantly higher rain totals exceeding 35 inches, by early next week. This heavy amount of rain will likely result in widespread life-threatening and prolonged flash flooding. Residents need to take this matter seriously and evacuate if ordered by local authorities.

Harvey will also deliver a 6 to 12-foot storm surge along the east of its path into the Texas Gulf Coast. At the same time, the storm will produce large swells, battering waves, and dangerous life-threatening rip currents. A Storm Surge Warning has been issued from Port Mansfield, Texas, to High Island, Texas. This includes the Corpus Christi area. Storm Surge Watches remain in effect from south of Port Mansfield, Texas, to the mouth of the Rio Grande River and north of the San Luis Pass to High Island, Texas.

We will be holding another Facebook Live Update with Earth Networks meteorologists, Steve Prinzivalli. Join us live at 3 pm ET for an update on Hurricane Harvey.