Hurricane Irma is moving over St. Martin and Anguilla this morning. The Category 5 storm is bringing potential catastrophic conditions to the northern Leeward Islands. It will pass very near the Virgin Island and Puerto Rico later today.

As of 8 a.m. EDT (AST), Hurricane Irma was located near 18.1 N and 63.3 W. This is about 15 miles west of St. Martin and about 15 miles west-southwest of Anguilla. Irma’s top sustained winds remain at 185 mph. These winds make Irma a severe, chart-topping Category 5 hurricane on the Saffir-Simpson Hurricane Wind Scale. Irma’s minimum central pressure is 918 mb, or 27.11 inches of mercury. It continues to move west-northwestward at 16 mph.

Hurricane Warnings are in effect for:

Hurricane Watches are in effect for the central Bahamas and much of Cuba.

Irma will bring destructive winds, a massive, dangerous storm surge, and rainfall exceeding a foot to the Leeward Islands this morning. The rainfall could produce flash flooding and mudslides in mountainous areas. Irma will approach and pass near the Virgin Islands and Puerto Rico later today and Thursday, bringing the same severe hurricane conditions, including destructive winds, flooding rainfall and storm surge.

Irma continues to be guided west by a strong Atlantic high pressure positioned to the north of the storm. Irma’s center will move very close, if not right over the northern Leeward Islands today. It will then likely come very close to Puerto Rico, the Dominican Republic and Haiti later today and Thursday.

Following the passage of an East Coast cold front, a high-pressure ridge settling in will help keep Irma on a westward track. This means the southern and eastern Bahamas and Cuba could be Irma’s next target Friday into early next weekend. Beyond that, it’s looking increasingly likely that Irma could turn more towards the north and impact Florida late in the weekend or early next week.

Warm water along Irma’s path will allow it to maintain its major Hurricane status, even though some fluctuation in strength is possible. A hurricane this intense could lead to catastrophic damage along its path.

Looking Forward: Irma in the U.S. 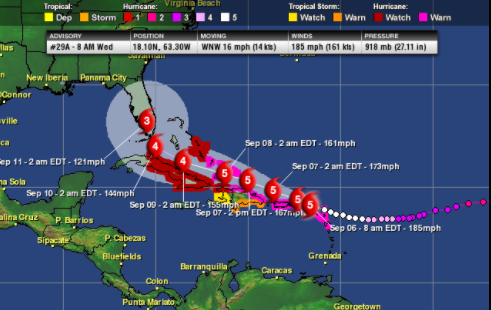 Southern and central Florida residents should start executing hurricane plans, including preparing hurricane survival kit, installing hurricane shutters and preparing for evacuations, if ordered. Mandatory Evacuations in the western Florida Keys have already been issued with additional orders likely this afternoon, so please heed the advice of local officials. Don’t wait to evacuate if ordered, because routes could become gridlocked.

For this season, Irma, the fourth hurricane, formed on the final day of August. Irma is also the second major hurricane of the season, which in a normal season doesn’t typically happen until October 3.

We are going live every day this week at 4 PM EDT on our Facebook Page to broadcast the latest Hurricane Irma information. If you want to stay updated, tune in, like our page, and make sure your notifications are turned on for Earth Networks so you don’t miss a critical broadcast. After each broadcast, we’re adding our videos to a playlist so you can track the storm in one spot.

You can view today’s video by clicking this link or refreshing the box below around 4 PM EDT.

Please submit any questions you have about the storm in the comments below or on our Facebook page so we can answer them during the broadcast.