Lightning killed more than 300 wild reindeer in Hardangervidda, Norway. Officials found the 323 carcasses on the Hardangervidda mountain plateau after a lightning storm passed through on Friday, 26 August, 2016.

322 reindeer were killed by lightning in Norway the day before yesterday. At the same spot. Freak accident. pic.twitter.com/BLtTa6Zwgi

Officials found the animals, including 70 calves, within a 50 meter radius. The storm injured five other reindeer that officials had to put down.

Although lightning is known to strike and kill animals, officials from the Norwegian Environment Agency have never seen this many animals killed before. They’re calling it a “freak accident”. While we don’t like to use this term when describing lightning incidents because we believe it downplays how common and serious they are, we must admit this is a very large number of victims at once.

An employee of the agency found the carcasses while conducting a count in connecting with the culling of the herd, through a controlled hunt.

Earth Networks Total Lightning Network™ detected 511 total lightning strikes over central Norway on the day the animals were found. The image below shows the strikes nearest the area where the reindeer died. 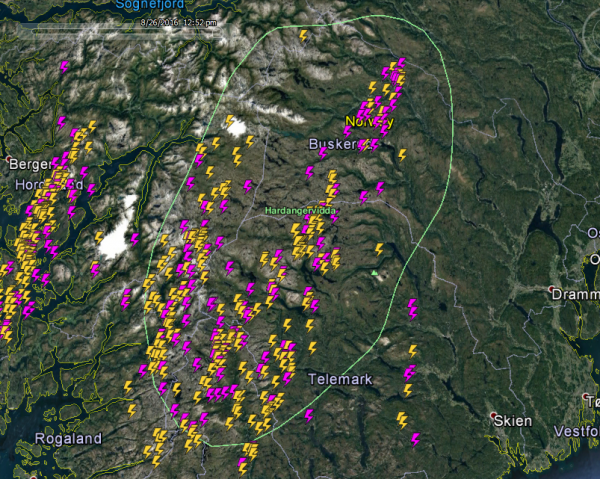 Instead of a separate strike killing each individual reindeer, it is more likely that one cloud-to-ground strike caused the death of all of the animals.

Lightning is extremely dangerous to both humans and animals. You can learn more about lightning on our lightning facts page. It’s full of information like the science behind thunderstorms, lightning safety tips, and more.

If you own pets or livestock, it’s important to try and bring them to a save location before severe thunderstorms arrive. That’s why we’re huge proponents of early warning systems through our tools like Sferic Mobile. The sooner you know dangerous weather it coming, the sooner you can prepare for it.

More On These Reindeer 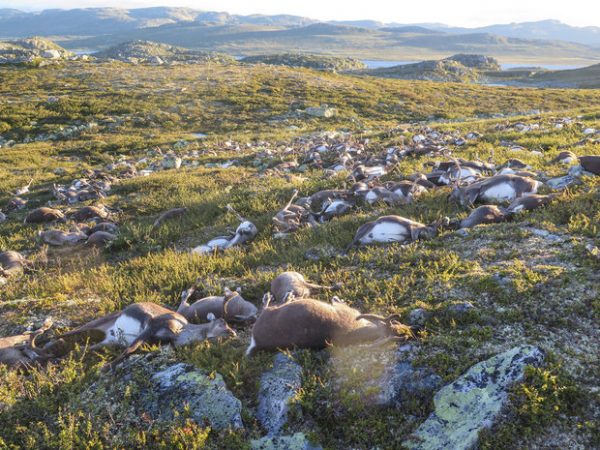 Reindeer are herd animals and tend to stick together closely during thunderstorms or other stressful events. This strategy normally works to protect them, however in this case it may have led to their deaths.

Much of the mountain plateau where the bodies were found is part of Hardangervidda National Park. The park is home to approximately 10,000 reindeer, making it Norway’s largest wild reindeer range.