Maria Still Churning off the Southeast Coast; Lee No Threat to Land 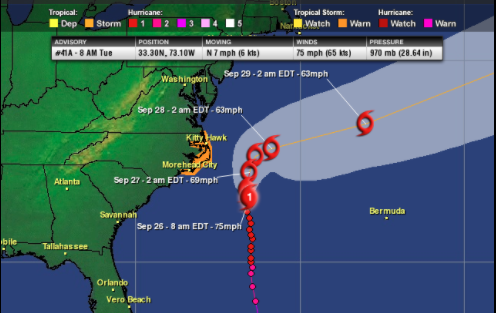 Maria is now a minimal Category 1 hurricane. Current conditions include large swells to the eastern U.S. even as it lingers well off the Southeast coast. Meanwhile, Hurricane Lee is spinning harmlessly out in the central Atlantic.

As of 8 a.m. EDT, Maria was located near 33.3 N and 73.1 W. The storm’s maximum sustained winds of 75 mph, making it a minimal Category 1 hurricane on the Saffir-Simpson Hurricane Scale. Maria is about 190 miles southeast of Cape Hatteras, N.C. It is moving north at 7 mph. The minimum central pressure has risen to 970 mb or 28.65 inches of mercury.

Maria will continue to generate dangerous surf through Midweek along:

Maria will gradually weaken as it moves parallel to the East Coast. It remains well east of Cape Hatteras, N.C., through Wednesday. Even so, its outer bands will reach the North Carolina’s Outer Banks today and Wednesday. Rain squalls, tropical storm force wind gusts, and a 2- to 4-foot storm surge are likely. This could cause beach erosion along most of the Outer Banks.

Once Maria passes the Outer Banks Wednesday, a cold front will push towards the East Coast. This cold front will send Maria on a sharp right turn well out into the Atlantic on Thursday and Friday.

This is Puerto Rico days after Hurricane Maria tore through the US territory: Flooded streets and long lines for gas https://t.co/o7kXtHX2I6 pic.twitter.com/lxVdlpTlXU

Puerto Rico received a direct hit from Maria last Wednesday, with 20 to 30 inches of flooding downpours and a 6 to 9 feet of storm surge. The whole island of 3.4 million people is without power and widespread flooding and mudslides have been reported. The weekend failure of the Guajataca Dam in northwest Puerto Rico is causing life-threatening flash flooding downstream.

Meanwhile, Hurricane Lee continues to drift around well out in the Central Atlantic. As of 5 a.m. EDT, Lee was located near 30.0 N and 52.5 W, or 745 miles east of Bermuda and 1,555 miles west-southwest of the Azores. Top sustained winds with Lee are 100 mph. The storm is moving to the west at 10 mph and has a minimum central pressure of 977 mb, or 28.85 inches of mercury.

Lee is following the periphery of a high-pressure ridge, so it will likely do a little loop in the Atlantic through for the next several days before sliding northeast ahead of the same cold front that will push Maria deep into the Atlantic. Although it will stay a hurricane through the work week, it will not be a threat to land.