The 2017 NFL Playoff battle between the Green Bay Packers and the Dallas Cowboys on 15 January was exciting until the very end. While storms rolled over AT&T Stadium throughout the evening, the two teams played a tight game decided by a  field goal.

The Packers won 34-31, but heartbroken Dallas fans couldn’t leave the stadium after the game-winning field goal due to severe weather.

Stadium officials called a “shelter in place” after the National Weather Service released tornado and flash flood warnings. Officials instructed fans to move away from doors and even delayed Green Bay buses from leaving the stadium. Players and fans spent three hours waiting out the storm in AT&T Stadium before conditions improved.

Although there were no reported tornadoes in the area, the AT&T Stadium officials made the right call. Weather conditions were perfect for a dangerous tornado in the Dallas area. We detected over 72,000 total lightning strikes in the north Texas area during and after the game. The video below shows the path of the steady lightning outside of the enclosed AT&T Stadium where the playoff game took place.

Officials allowed fans to leave around 10pm when the DTAs began to move way from AT&T Stadium. While there were no tornadoes, there was a dangerously close cloud-to-ground lightning strike just .45 miles from the stadium at 8:30pm CST. 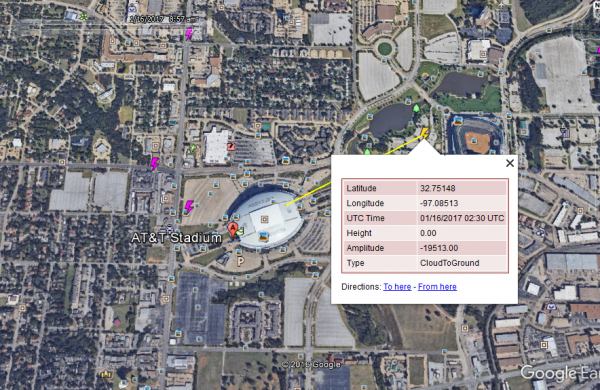 We Want to Hear from You!

Were you at AT&T Stadium for Sunday’s big game? Let us know how it was waiting for the shelter in place to end by commenting below or email  marketing@earthnetworks.com. Remember to always heed official weather warnings when attending recreation events.