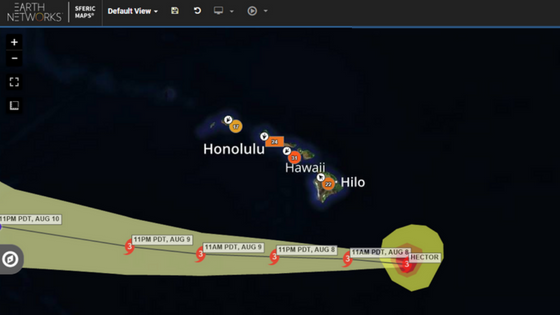 Major Hurricane Hector is forecast to make its closest pass of the Hawaiian Islands today. It should zip just south of the Big Island. Tropical storm force winds from Hector could occur there.

Although Hector is expected to pass south of the Big Island, it could still move close enough that the northern fringes produce tropical storm force winds. These winds could exceed 39 mph across the Big Island. There is a greater chance for these strong winds over the higher elevations and the immediate southern coastline. A Tropical Storm Warning is in effect for Hawaii County, which covers the entire Big Island of Hawaii.

The main hazards associated with Hurricane Hector include high swells and strong winds. The surf will be roughest along the east and southern shores of the Big Island and the eastern shores of Maui today. Hector could be close enough to the Big Island to produce a few rain squalls as well.

Hector will likely oscillate in strength while tracking south and southwest of the Hawaiian Island chain this week. It will briefly fall below major hurricane strength late on Wednesday into Thursday. By Friday and beyond, it will briefly intensify again as it tracks over warmer central Pacific water and a favorable upper-level environment. 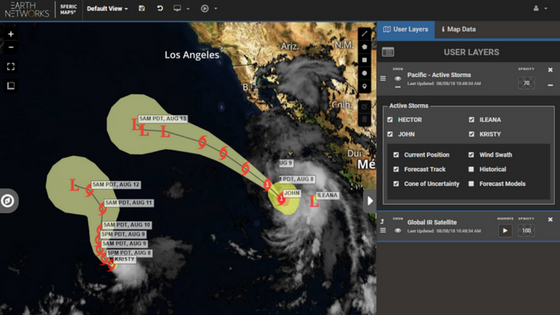 Hurricane Hector isn’t the only tropical disturbance causing trouble in the Pacific Basin. Hurricane John is churning close to the western Mexico Coast. You also have to worry about Tropical Storm Kristy, which is further out in the central Pacific. Kristy could briefly become a hurricane on Wednesday.

So far, the Pacific has already totaled 11 named storms this season. On average, it only sees 7 named storms by early August.

There is quite a lot of activity going on both in the Pacific and Atlantic Basins. The Atlantic, quiet since Hurricane Chris raced away from Atlantic Canada on July 12, has Subtropical Storm Debby churning away well east of the U.S. Debby won’t be a threat to the U.S. or Atlantic Canada during the next day or two. This is because it will turn northeast and merge with a large upper-level disturbance in the open North Atlantic. It will probably produce high seas and rough surface for mariners though.

As we head towards the peak of hurricane season, our meteorological operations team is ready to share their insights, consult customers, and answer any questions regarding these dangerous storms. You can stay in the loop the following ways: