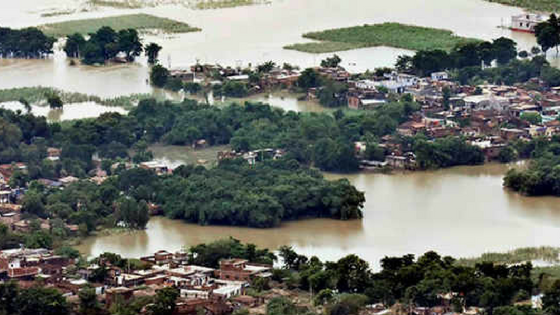 Nepal, India, and Bangladesh are experiencing the worst flooding in decades this monsoon season. The storms, which seem to stretch into weeks, have pounded the region for weeks.

All three countries annually expect heavy rains from June to September. In fact, farmers rely on the yearly rains to sustain operations. However, this year the heavy rains and flooding destroyed entire crops.

Besides flooding, the heavy rains also loosened soil and caused devastating landslides throughout the region. Almost 2,000 relief camps have been established for flood refugees.

Our partner in India, Skymet Weather, recorded the rain totals throughout India during the past week of monsoon rain. that Mumbai received 331 mm of rain in just one day during the last week of August. This was nearly a month’s worth of rainfall in a single day.

Mumbai received 331 mm of rain in just one day during the last week of August. This was nearly a month’s worth of rainfall in a single day.

From  17 to 18 August, Gaya, Bihar, received 62.6 mm and Chapra, Bihar received 62 mm of rain. Other rainfall totals for areas on this date provided by Skymet Weather include:

The floods and landslides have had devastating impacts throughout all three countries.

According to the United Nations Office for the Coordination of Humanitarian Affairs (OCHA) the “most urgent concern is… accessing safe water and sanitation facilities.” Another main problem is that the flood waters have completely cut off small villages from help. This means people there cannot access food, either.

OCHA also warned of dangers to women and children, who are at increased risk for abuse, violence, and sexual harassment during this weather disaster.

In Nepal, the driving rains and fast-moving floods destroyed 90,000 homes. The United Nations is referring to this event as the worst flooding there in a decade. In Bangladesh, a low-lying and densely populated country, over crops on over 10,000 hectares have been washed away. Over 600,000 hectares of farmland were at least partially damaged.

Anirudh Kumar, a disaster management official in Patna, Bihar, announced that “this year’s farming has collapsed due to floods and we will witness a sharp rise in unemployment.” Even though the rains are starting to lighten, there will be long-lasting negative consequences to this flooding.

The last time the Southeast Asia flooding was this bad was back in 2005. During the monsoon season of that year, floods killed more than 500 people in Mumbai, alone. During those storms, the majority of deaths occurred in shanty town slums. These slums made up about half of Mumbai’s population at the time.

Part of the reason why these areas are so susceptible to flood waters is inadequate draining systems. Plastic garbage frequently clogs drains. It also doesn’t help that these slums are located on flood plains and coastal areas.