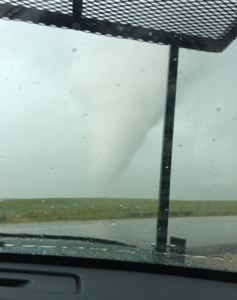 Two Canadian provinces experienced severe weather conditions, including a number of tornadoes, on 31 July and 1 August 2016. A group of strong storm cells made their way northeast through the region, bringing with them heavy rains, golf ball-sized hail and high wind speeds.

The tornado in the picture to the left was spotted off Highway 9, just south of Yorkton, Saskatchewan. The Environment and Climate Change Canada (ECCC) meteorologists confirmed two tornadoes in Saskatchewan on Sunday which destroyed homes in Yorkton. Other tornadoes touched down in Melville and Camperville. The First Nation of Waywayseecappo also experienced devastating tornadoes during storms the following week.

The time lapse video above powered by Earth Networks Total Lightning Network™ shows strong storm cells making their way through the worst affected towns on Monday. On Monday alone, our Total Lightning Network detected over 100,000 strikes in the affected regions. The purple polygons represent Dangerous Thunderstorm Alerts (DTA’s), which serve as a warning for a variety of severe weather conditions including the tornadoes that these Canadian towns experienced. Earth Networks sent out over 25 DTA’s during the two–day period.

On Sunday, a tornado touched down just 10km northwest of Melville around 4pm local time moving at 30 km/h. Around 4:30pm local time, another tornado was spotted about 25km northeast of Melville in nearby Otthon. This tornado destroyed a family’s farmhouse. Luckily, they were not in the house when the tornado struck.

The storm cells that passed through the region on Sunday and Monday contained heavy rain that caused flooding in some towns. Yorkton received 60mm of rain on Sunday evening in just one hour. Yorkton Airport reported rainfall of 34mm within the same time period.