White Christmas Hopes: Will You Being Seeing Snow?

You might be dreaming of a White Christmas, but that doesn’t mean you’ll get one. With Christmas just two days away, the chances for a Christmas reminiscent of the Bing Crosby favorite are gradually melting away.

Even though a large part of the central and northeastern US received plenty of early-season snow to add to the holiday festivities, a significant US weather pattern is happening through the end of the week into Christmas 2016 weekend. All of the arctic air from the past few weeks moved back to Canada. Now we’re looking at Christmas Day temperatures in the 50s and 60s across the middle of the nation. Not only will it not snow in most places, but your accumulated snowfall will melt before Christmas morning if you live in the central Plains, Great Lakes or Appalachian regions.

Christmas weather along the US Southern-Tier will provide a typical “Green Christmas.”

Places with the Best Chance

A possible winter storm could move across the Mountain West into the northern Plains this weekend. This could mean some fresh snow for the Sierras, Cascades and Inter-mountain West on Christmas Eve. This storm has a chance to intensify as it pushes eastward. Locations in the Dakotas and northern Minnesota could see blizzard-like conditions on Christmas Day. 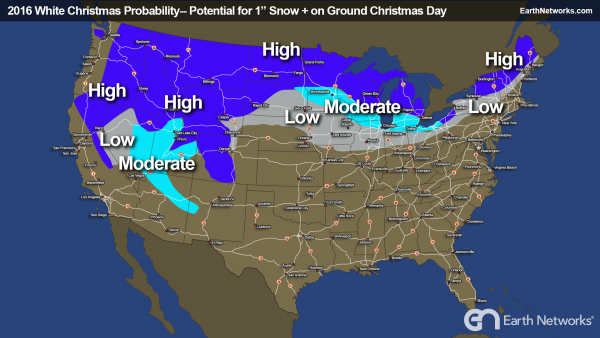 The places you’ll most likely experience a White Christmas are the places that normally have snow on the ground this time of year. They are: 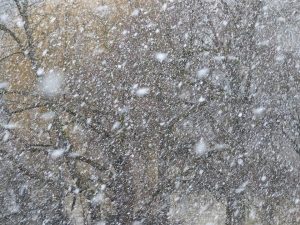 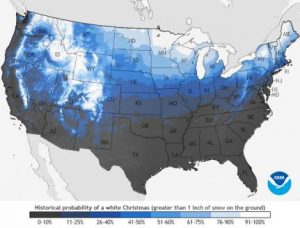 The regions with the best potential for a White Christmas in the US historically are the Mountain West, the northern Great Plains, lake-effect snow belts and the interior northeast.