The upcoming winter could see plenty of wild weather, but several places, like drought-stricken California and the parched Southeast could miss out on the action, says the Earth Networks Meteorology team in their annual 2016-2017 Winter Outlook.

After last winter’s strong El Nino fueled wild weather, the U.S. weather will likely be driven by La Nina, El Nino’s counterpart. La Nina is a periodic cooling of the equatorial Pacific Ocean that can have a varying effect on the weather across North America. Historically, La Nina can bring wetter and cooler weather to the northern U.S. and warmer and drier weather to the U.S.’s southern tier. However, here are a few of the highlights: 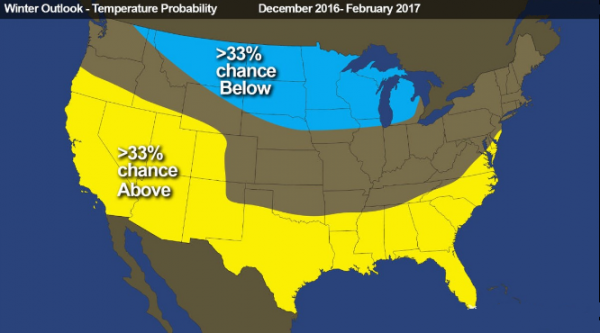 Even so, La Nina and other factors like northern Pacific and Atlantic ocean patterns seen this year isn’t offering a slam-dunk forecast. “There is no one clear cut strong signal for bitter cold outbreaks, excessive warmth or major winter storms in the U.S.” says Chad Merrill, Earth Networks meteorologist and lead forecaster on this year’s winter forecast.