Germantown, MD – July 19, 2021 — Earth Networks, operator of a nationwide lightning detection network in India, released its 2020 South Asia Lightning Report today, including coverage of India, Bangladesh, and Sri Lanka. For all of 2020, Earth Networks’ Total Lightning Network detected 39,549,444 lightning pulses in India, of which 12,022,402 were dangerous cloud-to-ground strikes. The top 5 states with the most lightning last year were Tamil Nadu, Andhra Pradesh, Karnataka, West Bengal, and Odisha. Explore the interactive map of Indian lightning data by state, as well as the 2020 lightning data for Bangladesh and Sri Lanka.

Severe weather and the dangers of lightning pose a great threat to the Indian population. India experiences extreme amounts of heat and moisture due to the country’s proximity to the equator and the Indian Ocean, contributing to severe and sudden thunderstorms throughout South Asia. According to a study by the National Crime Records Bureau, since 2001, 2,360 people die in India every year due to lightning.

With the Indian Monsoon now fully advanced, the country has experienced tragic deaths due to severe weather within the past few weeks. It is Earth Networks’ mission to enable a safer, more prosperous world through the dissemination of early warning for natural disasters such as thunderstorms, flooding, and severe storms. The company offers comprehensive visualization and alerting tools that enable India’s disaster management agencies to issue automatic warnings and estimate storm arrival times to help save lives and reduce property damage. Currently, Earth Networks works with various central and state agencies, universities, and private industry sectors across India.

Governmental agencies such as the Indian Armed Forces, Ministry of Earth Sciences, and NESAC collaborate with Earth Networks’ lightning sensors and their data and analytics to increase their preparations for severe weather.

With climate change and rising temperatures, the incidence of severe thunderstorms will only increase. Effective early warning systems coupled with effective action plans to save lives is key to keeping communities safe. Action plans need to consider the dissemination of alerts in a timely manner and ensure that everyone is receiving them. One of the most important roles that Disaster Management agencies and NGOs can play is in imparting education to even the most remote villages, so people understand what actions need to be taken when they receive alerts or warnings.

Earth Networks Total Lightning Network is the most extensive and technologically advanced lightning network in the world. Its ability to monitor both cloud-to-ground and in-cloud lightning in near real time enables faster localized storm alerts which include location, coverage, intensity, trends, and warnings of other forms of severe weather.

Earth Networks is proud of its association and support of various state disaster management authorities in India and is looking forward to partnering with many more to help save more lives and reduce damages caused by severe weather events.

Earth Networks, part of the Advanced Environmental Monitoring family of innovators, has been taking the Pulse of the Planet for more than 20 years. We help organizations mitigate financial, operation, and human risk by providing environmental intelligence from the world’s largest hyperlocal weather network. Schools, airports, sports teams, utilities, and government agencies rely on our early warning solutions to safeguard lives, prepare for weather events, and optimize operations. Companies across all industries use out weather data to automate decisions regarding risk management, business continuity, and asset protection. 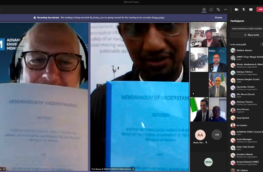 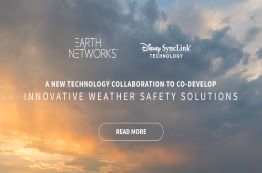