Which States Have the Most Lightning Strikes?

Just how many lightning strikes did your state see this year?

The Top 10 States with the Most Lightning Strikes in 2019

With all this lightning activity, you can be sure your state saw plenty of lightning last year. But how much?

Our Earth Networks Total Lightning Network (ENTLN) knows exactly how much. The 2019 Earth Networks Lightning Report revealed the top 10 states with the most lightning strikes in 2019. Did your state make the list? Check it out below!

The Top 10 States with the Most Lightning Strikes in 2019

The counts above reflect total lightning data, or the combination of in-cloud and cloud-to-ground strikes. Believe it or not, in-cloud lightning is much more common than cloud to ground. In 2019, approximately 83% of all lightning strikes never touched down.

You can explore our in-cloud and cloud-to-ground lightning counts by county with out free, interactive 2019 map.

This year’s data showed there was a slight increase (~1%) in total lightning activity across the continental United States.

It’s more interesting to look at where the lightning did and didn’t happen. In 2019, there was less lightning in places like the Gulf Coast.

The image below shows the Thunder Day Anomalies for 2019 compared to the last seven years. 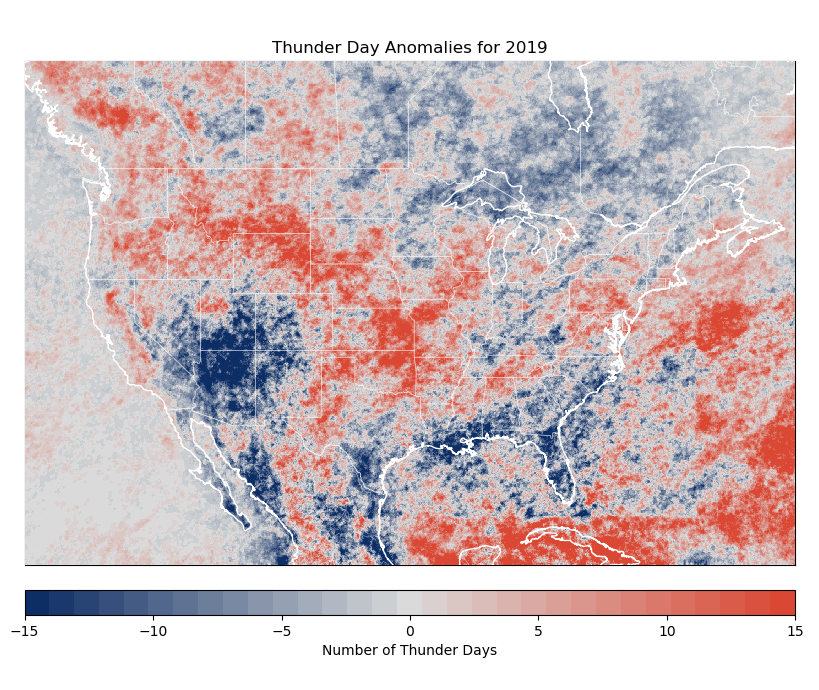 It’s no surprise that some of the top states for lightning strikes are some of the biggest states in the country, like Texas. When it comes down to it, lightning counts really aren’t the best way to compare which areas were most active.

Looking a real-time lightning map for your organization? Sferic Maps can show you hyperlocal lightning information around the world. Click the link below to learn more.