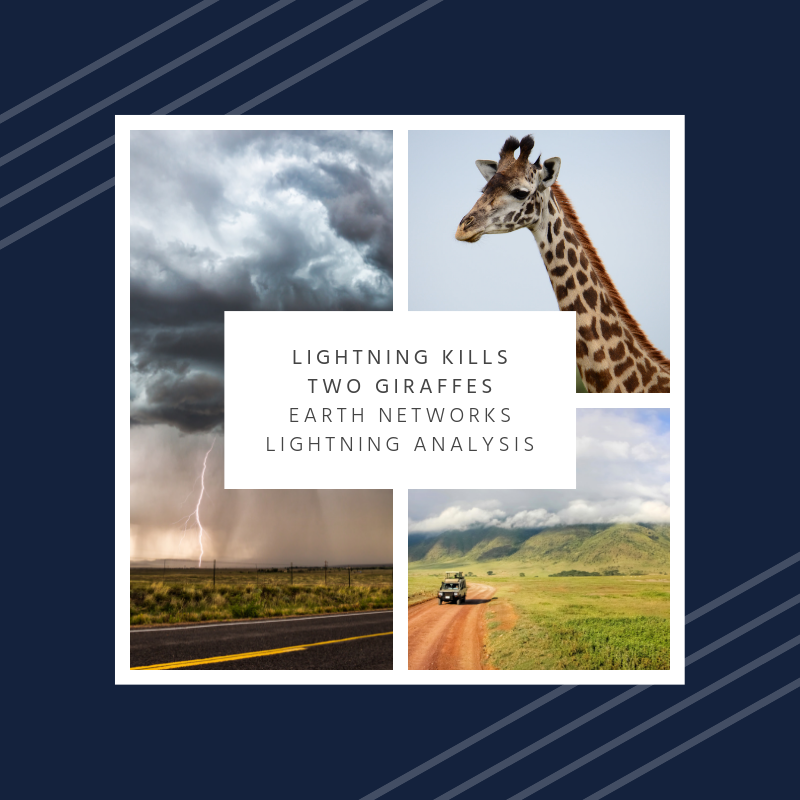 Lightning struck and killed two giraffes at the Lion Country Safari in Loxahatchee, Florida. The deadly strike(s) occurred on Friday, May 3, 2019.

Zoo workers discovered two giraffes named Jioni and Lily down in their pasture after a severe evening storm rolled in on May 3.

While no one saw the animals fall, a necropsy confirmed that lightning killed them.

Park officials report that both giraffes had access to their shelters before and during the storm, but that these two animals stayed out in the open.

Our Total Lightning Network detected lightning activity throughout the region on Friday, May 3, 2019. We detected 28,000+ in-cloud and cloud-to-ground strikes over a small area surrounding the park in just 12 hours.

The video below shows the in-cloud (purple) and cloud-to-ground (yellow) strikes our network detected.

Any of these strikes line up with the report that the storm rolled through during the evening hours.

It’s not uncommon for more than just a handful of animals to die, either.

In 2016, lightning struck and killed a massive group of reindeer. Over 300 wild animals died on the Hardangervidda mountain plateau after a lightning storm passed on Friday, August 26, 2016. The animals, which included 70 calves, were found within a 50 meter radius.

In a case like this one, we do not believe each animal was struck by a separate bolt. Instead, it’s more likely that one cloud-to-ground strike to one animal or even the ground caused the majority of deaths. This is called an indirect lightning strike and we believe a similar situation could have happened at Lion Country Safari.

Today is the third day of Lightning Safety Awareness Week.

The National Lightning Safety Council began this important awareness week to call attention to this underrated killer. Since this awareness week’s inception, U.S. lightning fatalities have dropped from about 50 per year to about 30 per year. 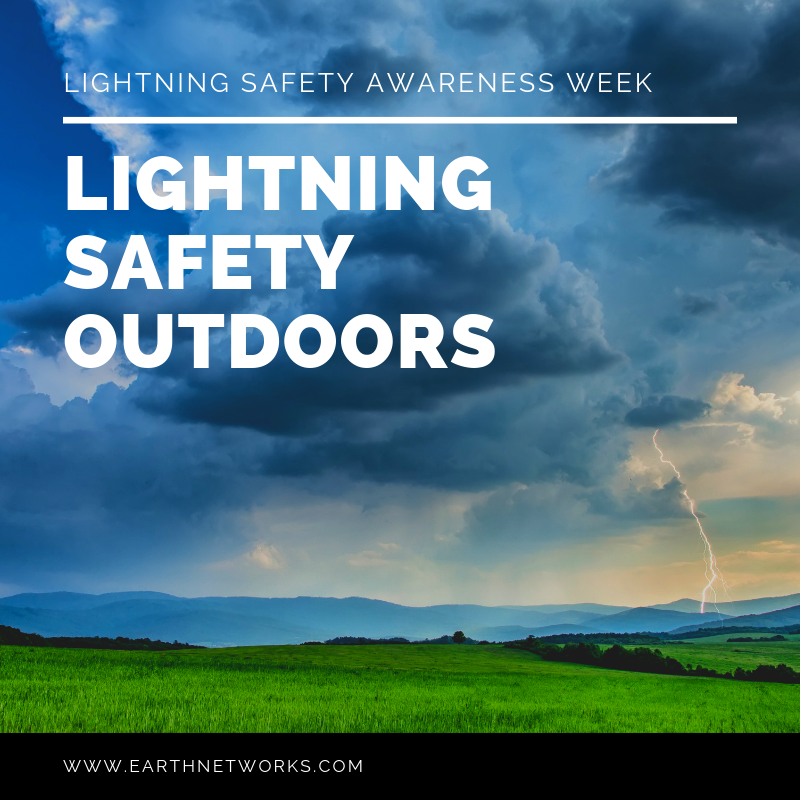 When lightning is in the area, the most dangerous place you can be is outdoors.

Each year, approximately 30 people in the U.S. die from lightning strikes. When we look at lightning fatalities on a worldwide scale the number jumps to 24,000 per year.

Lightning doesn’t have to kill you to have a large impact on your life. Lightning strikes injure approximately 240,000 per year. Lightning injuries range from burns to neurological issues.

A lot of these strikes happen outdoors, which is why we dedicate an entire day to it during Lightning Safety Awareness Week.

There is little you can do to substantially reduce your risk if you are outside during a thunderstorm. The only completely safe action is to get inside a safe building or vehicle.

A safe building is a large, enclosed structure with plumbing and electrical wiring. We recommend going to places like shopping centers, schools, office buildings, and private residents. Do not try to seek shelter in unsafe buildings like beach shacks, tents, metal shacks, baseball dugouts, carports, picnic shelters, and porches.

You can also seek shelter in enclosed vehicles. Golf carts, convertibles, tractors, and motorcycles do not count. You are not safe in these locations.

If You Can’t Get Indoors

If you absolutely cannot get to safety, you can slightly lessen your risk of being struck with the following tips:

The best way to protect yourself is to plan ahead. Know your nearest lightning safe shelters no matter where you are.

It’s also a good idea to carry a NOAA Weather Radio with you. You can find these at most electronic stores on online.

We also recommend utilizing weather technology that relies on total lightning detection. Total lightning is the combination of in-cloud and cloud-to-ground strikes. While in-cloud lightning strikes don’t pose a direct threat to humans or animals, they are a great indicator of severe storms and their direction.

Whatever you do, never use lightning prediction as it only knows when storms are coming after lightning strikes. That doesn’t give you enough time to seek shelter!

Lightning Safety Awareness Week is the perfect time to brush up on your lightning knowledge. You can do this by heading over to our lightning facts page and jumping to the topics you’re least familiar with.

You should also subscribe to the blog so you don’t miss any more important lightning safety messages from our team this week.