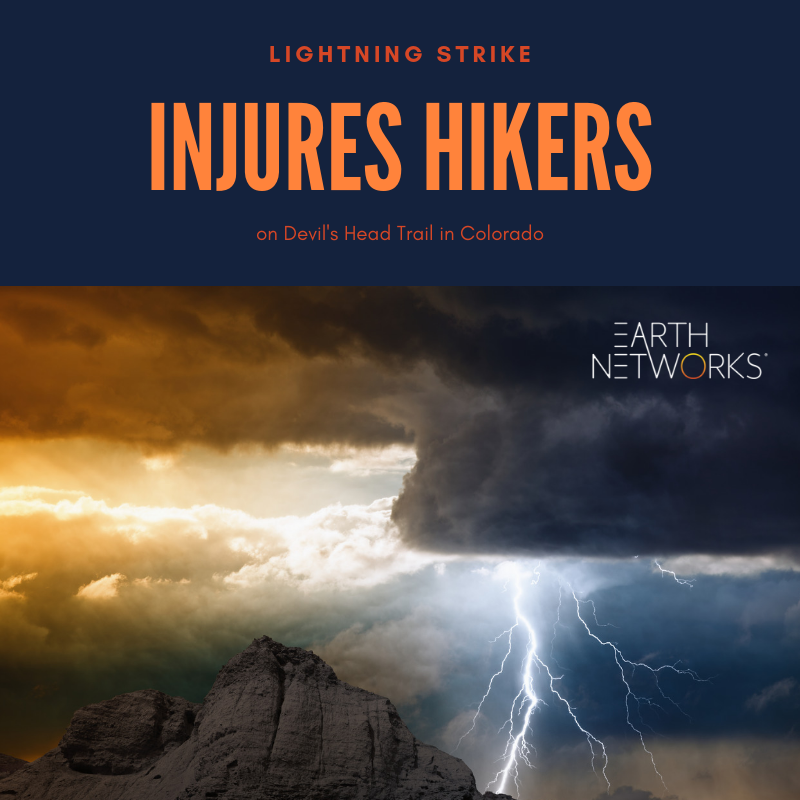 Lightning struck a group of eight hikers on Devil’s Head on June 30, 2019.

The hikers were near the Devil’s Head Lookout around 3 p.m. on Sunday when a cloud-to-ground strike hit them. More than 30 people assisted in the rescue operation.

Among the injured, five could walk away from the scene and received treatment for minor injuries, including burns and tingling sensations. Two other victims needed assistance exiting the woods.

The eighth hiker was critically injured and exited the woods on a stretcher. This victim was transported to a nearby hospital in critical condition. 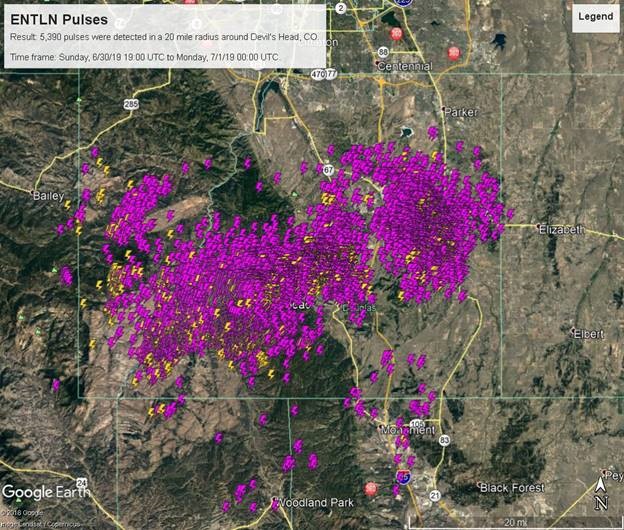 You can see the lightning strikes in the photo above. The magenta strikes are in-cloud and the yellow strikes are cloud-to-ground.

While in-cloud lightning strikes don’t hit people on the ground, they help us warn others of impending dangerous storms. High in-cloud lightning frequencies are often a precursor to other dangerous conditions like cloud-to-ground strikes, microbursts, and hail. You can watch a video detailing our Total Lightning detection, Cell Tracks, and Dangerous Thunderstorm Alerts (DTAs) below:

By monitoring in-cloud lightning, we’re able to measure the strength of storms accurately with Cell Tracks. You can see our Cell Tracks from this incident below. The weakest cells are green while the strongest cells are red. 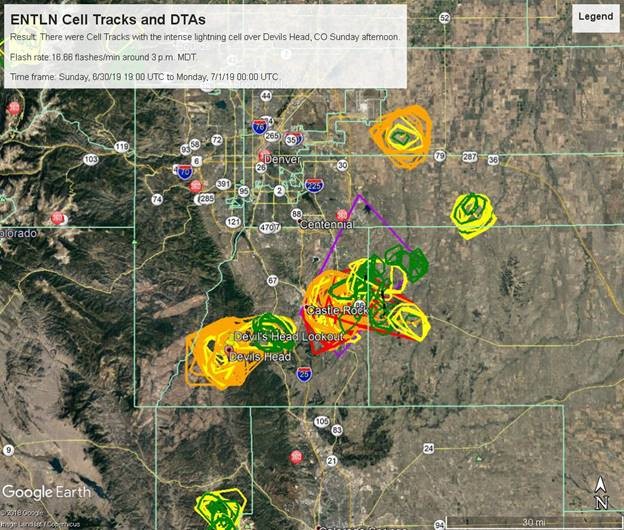 When lightning flash rates hit a certain frequency threshold, we send out Dangerous Thunderstorm Alerts (DTAs). DTAs offer lead times 50% faster than other lightning warnings. We represent DTAs on our visualization tools with purple polygons that encompass the warning area and open towards the direction the dangerous cell is moving.

We detected Cell Tracks around 3 p.m. local time from an intense lightning cell over Devil’s Head. This had a flash rate of 16.66/min. This coincides with the time in the press report o the lightning strike on the hikers.

Our detection network triggered a DTA later in the day to the east on the incident.

When it comes to severe weather safety at parks and recreation facilities, lightning is a top concern.

Earth Networks Meteorologist and Program Manager, Steve Prinzivalli, has been following recent case studies like this one closely and has this to say:

Although we’ve only had six fatalities from lightning so far in 2019, that’s six too many! Remember that it doesn’t take a ‘severe’ thunderstorm to produce lightning. ALL thunderstorms have lightning and, as such, are dangerous! People need to get inside at the first rumble of thunder and stay safe (away from windows) until at least 30 minutes after the last rumble of thunder.

A great way for people to be lightning-aware is via Earth Networks’ Sferic Maps whereby they can create custom alerts for lightning at locations of interest to them- park, beach, baseball field, wherever they might be. The alerts are sent to them email and phone so they can stay informed. Don’t forget this useful tool and it should be one of the most important things you pack for your summer vacation!

If you want to learn more about lightning or share lightning safety information with your coworkers or family, please use the link below.

Lightning Facts: Everything You Need to Know About Lightning