Hurricane Sally slams the Gulf Coast of Alabama and the western Florida Panhandle. 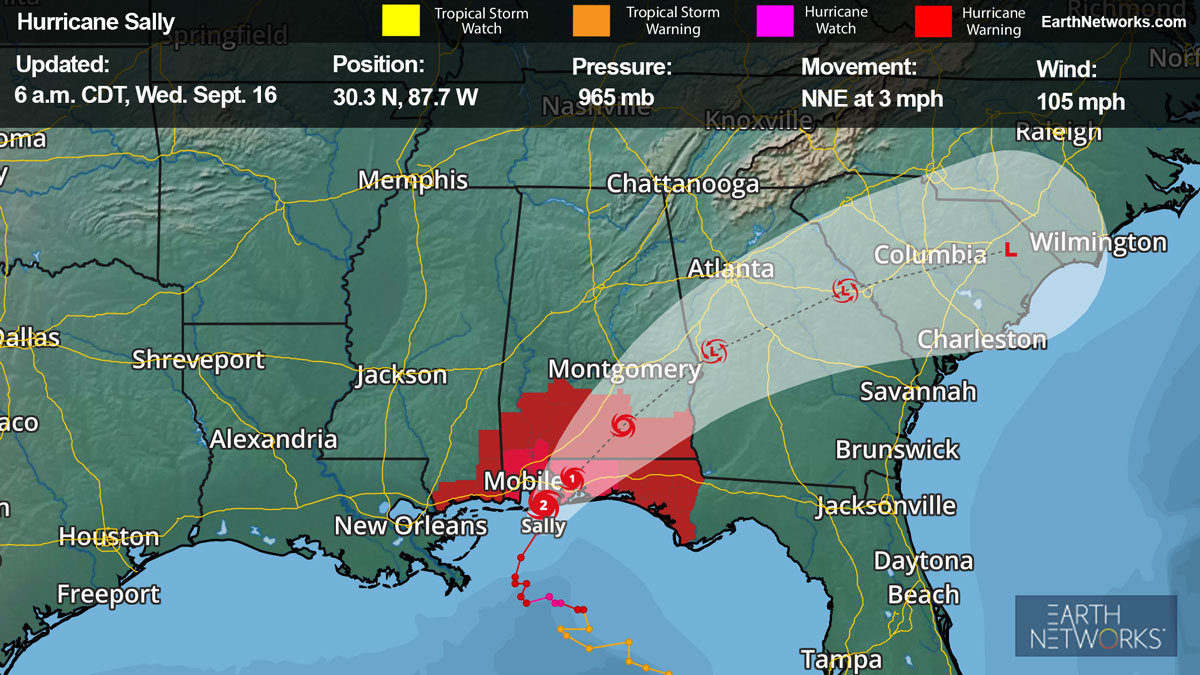 Hurricane Sally made landfall early this morning as a Category 2 storm. She came ashore near Gulf Shores, Alabama at approximately 4:45 am CDT moving at a slow 3 mph. As a Category 2 hurricane, Sally had sustained winds of 105 mph at landfall.

After making landfall, the storm weakened to a Category 1 hurricane, with current maximum sustained winds of 80 mph.

Now crawling along at 5 mph, Hurricane Sally could create historic flooding along the central Gulf Coast over the next several days. In addition to copious rainfall, this slow-moving storm will bring destructive coastal winds and storm surge.

As of 10 AM CDT, Hurricane Sally was located 30.6 N., 87.4 W. This is right over Gulf Shores, Alabama. This is about 15 miles north-northwest of Pensacola, Florida.

It has maximum sustained winds of 80 mph and is moving north-northwest at a slightly faster speed of 5 mph. Sally’s minimum central pressure is 975 mb (28.79 inches of mercury). As we mentioned above, Sally is a Category 1 hurricane on the Saffir-Simpson Hurricane Wind Scale. 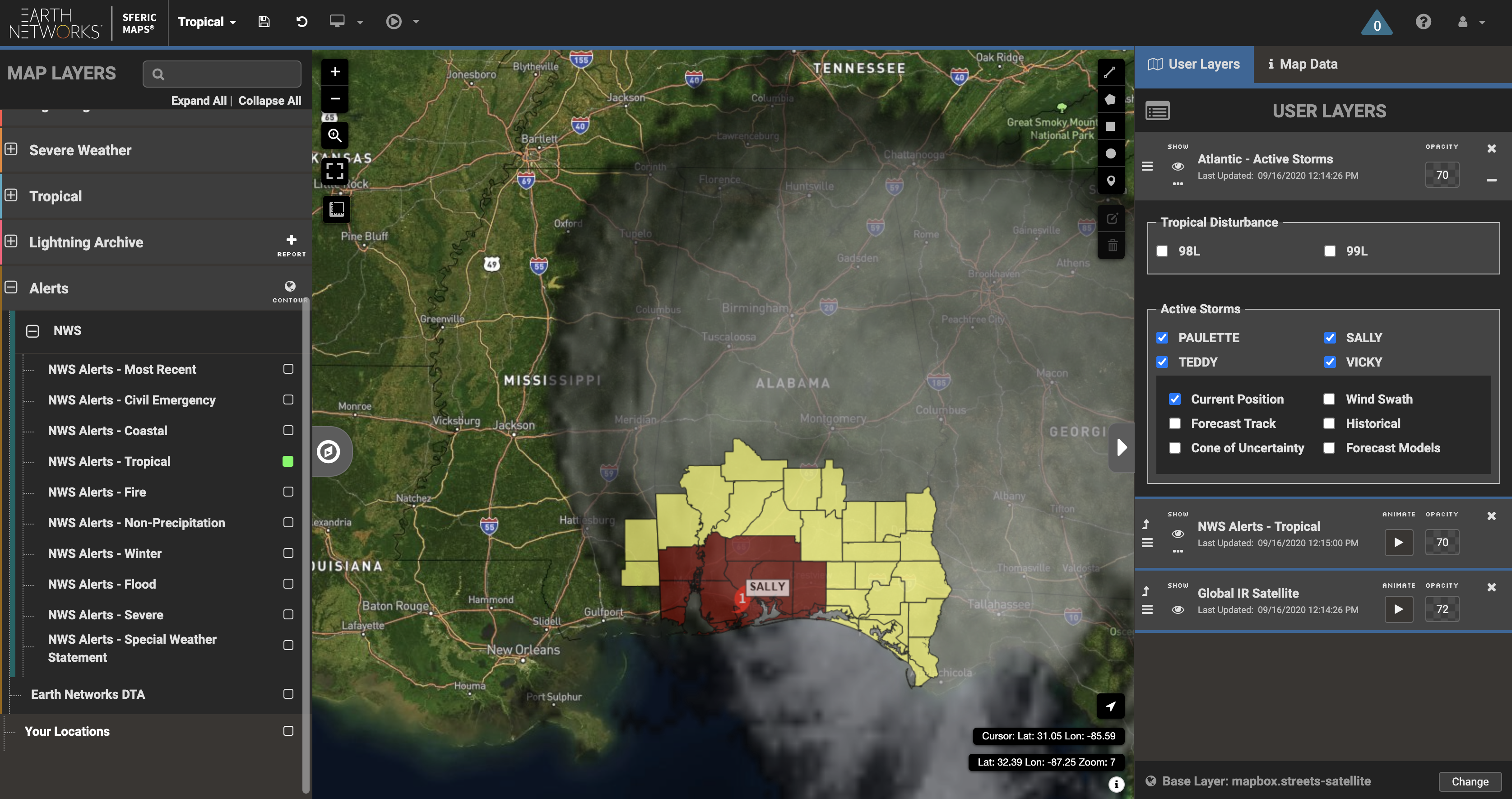 A hurricane warning is in effect from the Mississippi/Alabama border to the Walton/Bay county border in Florida.

Tropical Storm Warnings are active from east of the Okaloosa/Walton county line in Florida to Indian Pass, Florida.

A Tornado Watch is in effect for the following areas:

A Storm Surge Warning is active from Dauphin Island, Alabama to the Walton/Bay county line in Florida.

Besides gusty winds, storm surge of 4 to 7 feet is possible in coastal areas of:

On top of the surge, 10 to 20 inches of rain will be likely. Even higher amounts are likely along the Alabama coasts as well as the western Florida Panhandle.

Flooding is already reported across the Pensacola area and southern Alabama. 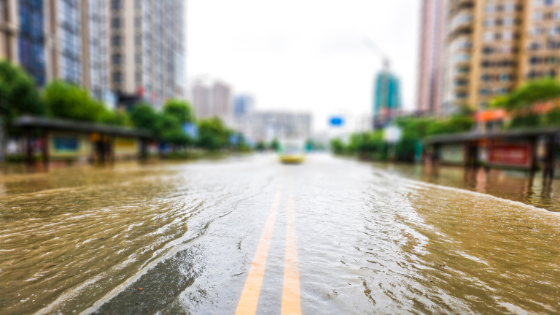 Later on today, the hurricane will quickly dissipate to a tropical storm and depression as it slowly moves inland across the Deep South.

This will ensure the flooding threat expands throughout much of Alabama, Georgia and the Carolinas into the middle of this week. 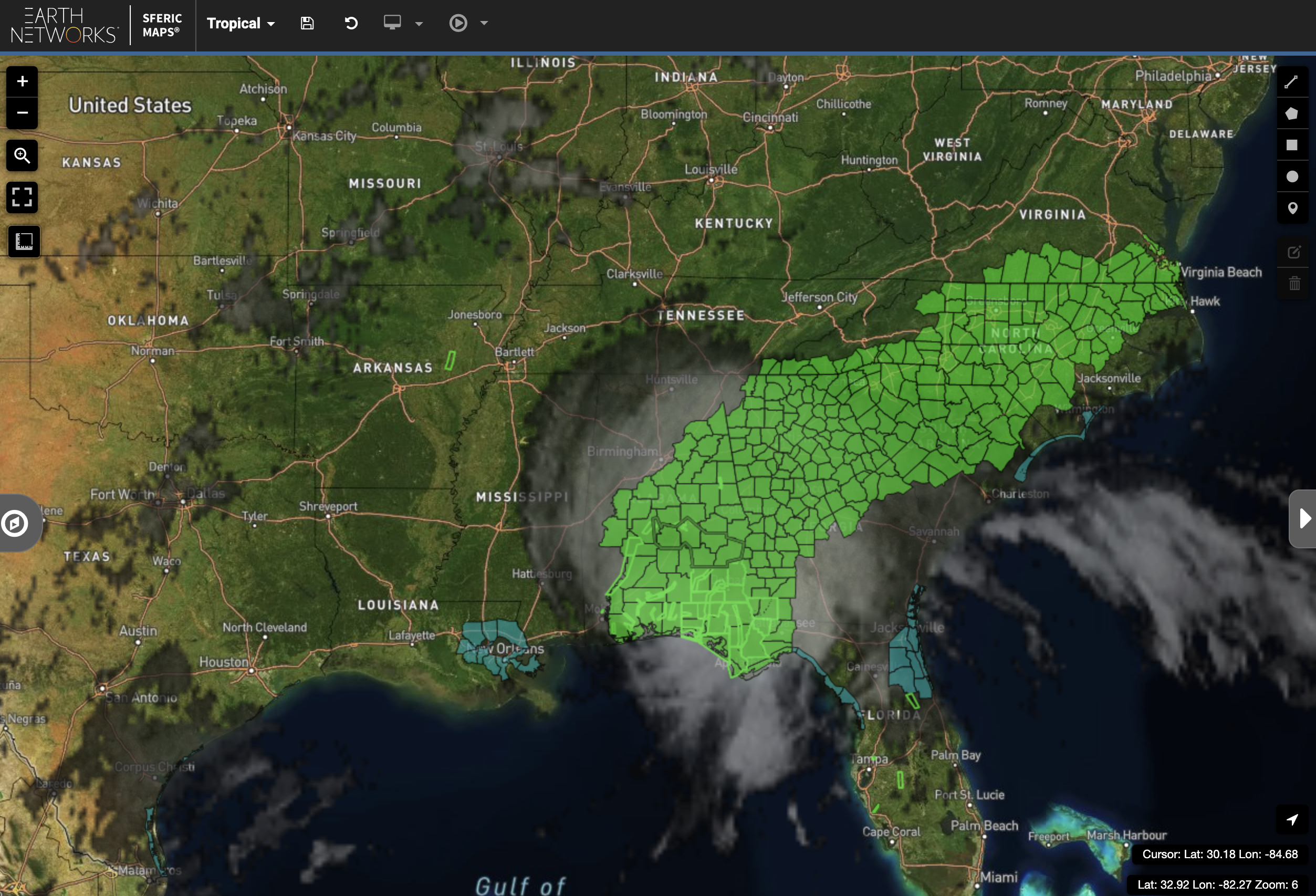 This weak has really shown us how scary the peak of hurricane season can really be. At this point, we are easily outpacing the 1921 – 2019 average.

Click here for a look at the Atlantic from our friends at the National Hurricane Center (NHC).

As Sally affects the U.S. and several other storms churn in the Atlantic, we’re offering access to our weather-tracking map, Sferic Maps, absolutely free.

With access to Sferic Maps, you can track the position, strength, and alerts of every tropical storm. Just click the link and you’ll receive immediate access to our intuitive, professional weather map so you can track the storm and make the best weather-related decisions.