Our ninth named stormed of the 2020 Atlantic Hurricane Season, Tropical Storm Isaias, made landfall as a Category 1 hurricane on August 3. 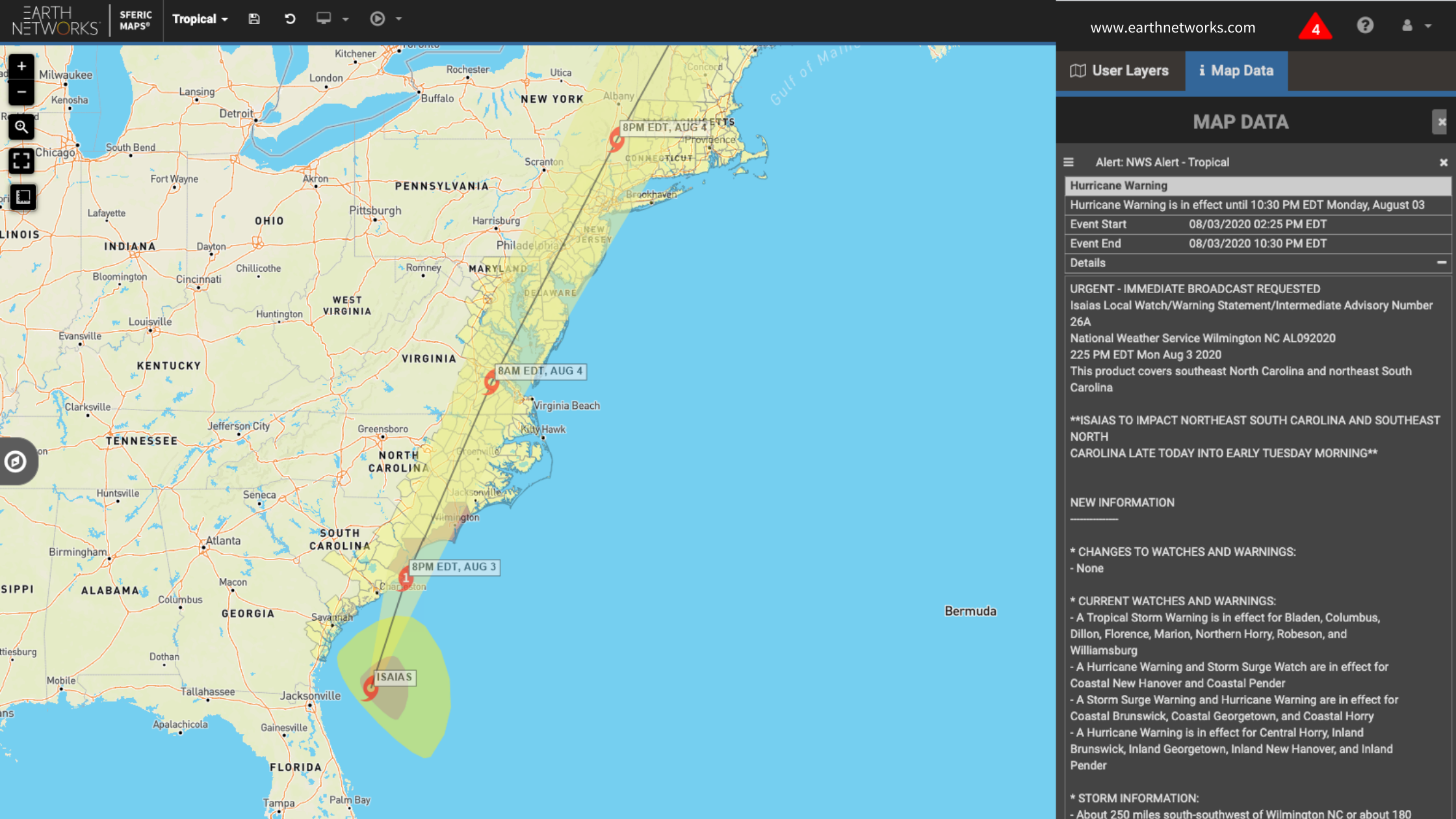 The system has max sustained winds of 70 mph.

Isaias is moving north-northeast at 35 mph. Tropical Storm Isaias has a central pressure of 993 mb or 29.33 inches of mercury.

Isaias made landfall around 11 PM EDT as a Category 1 hurricane near Ocean Isle Beach, South Carolina. 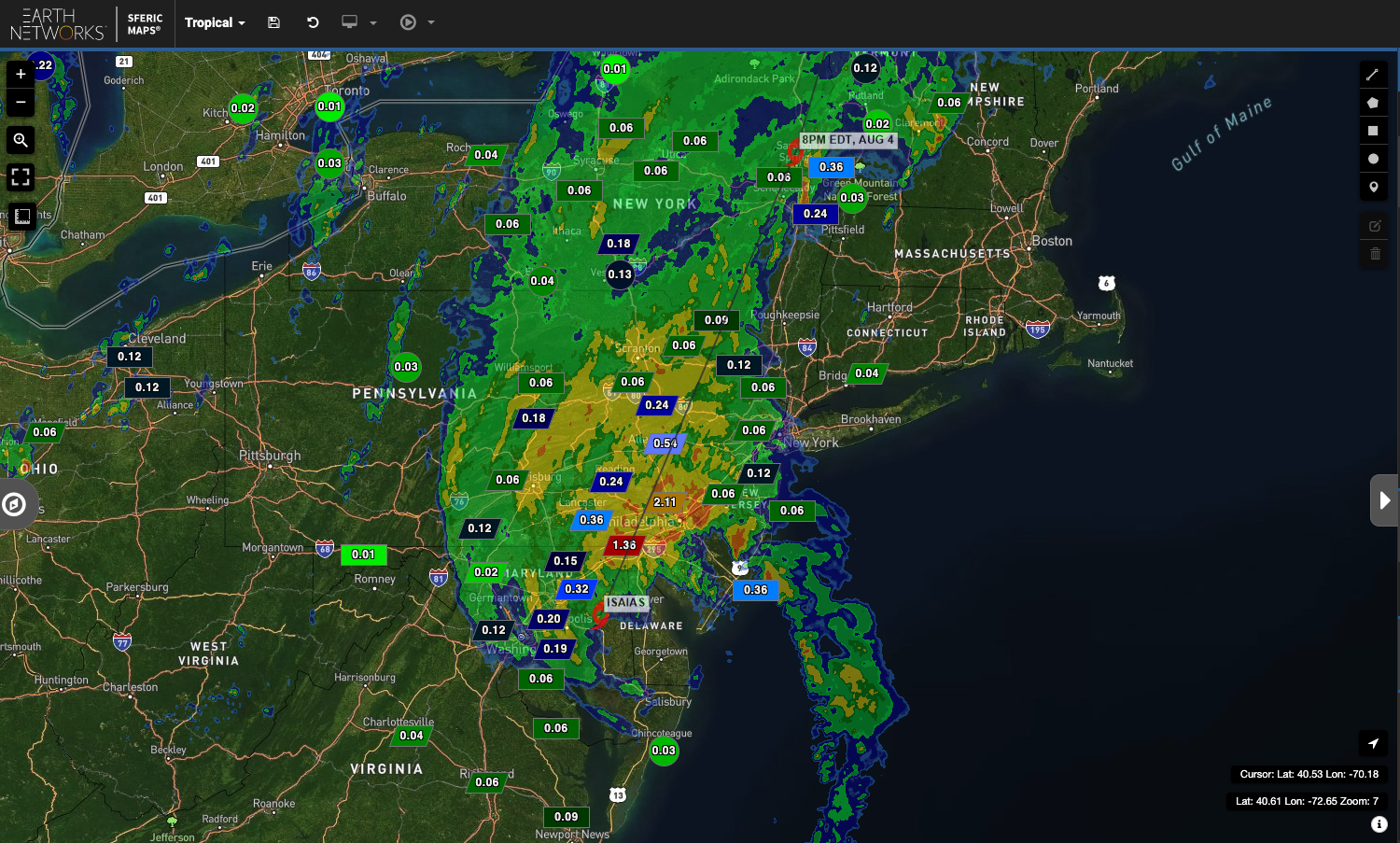 As of 11 AM this morning, the center of Isaias is moving rapidly across eastern Maryland. Strong winds, Heavy rainfall, and tornadoes will continue to spread north-north-eastward along the mid-Atlantic coast today.

There are four key messages for Tropical Storm Isaias from NOAA and the NWS.

1. There is the danger of life-threatening storm surge inundation along portions of the immediate coastline and adjacent waterways of the North Carolina coast, including portions of Pamlico and Albemarle Sounds. Residents in these areas should follow the advice of local emergency officials.

2. Forecasters expect Isaias to bring widespread sustained tropical storm force winds and wind gusts to hurricane force to the mid-Atlantic coast through this afternoon. This includes portions of the Chesapeake Bay region. These winds could cause tree damage and power outages. We expect tropical storm conditions to spread across New England tonight.

3. Heavy rainfall along the East Coast, near the path of Isaias, will result in flash flooding. Some of this flash flooding will be significant in North Carolina through the Mid-Atlantic and Northeast through tonight. Potentially life-threatening urban flooding is possible in D.C. , Baltimore, and elsewhere along and just west of the I-95 corridor today. Widespread minor to moderate river flooding is likely across portions of the Carolinas and the mid-Atlantic. Quick responding rivers in the Northeast will also be susceptible to minor river flooding. 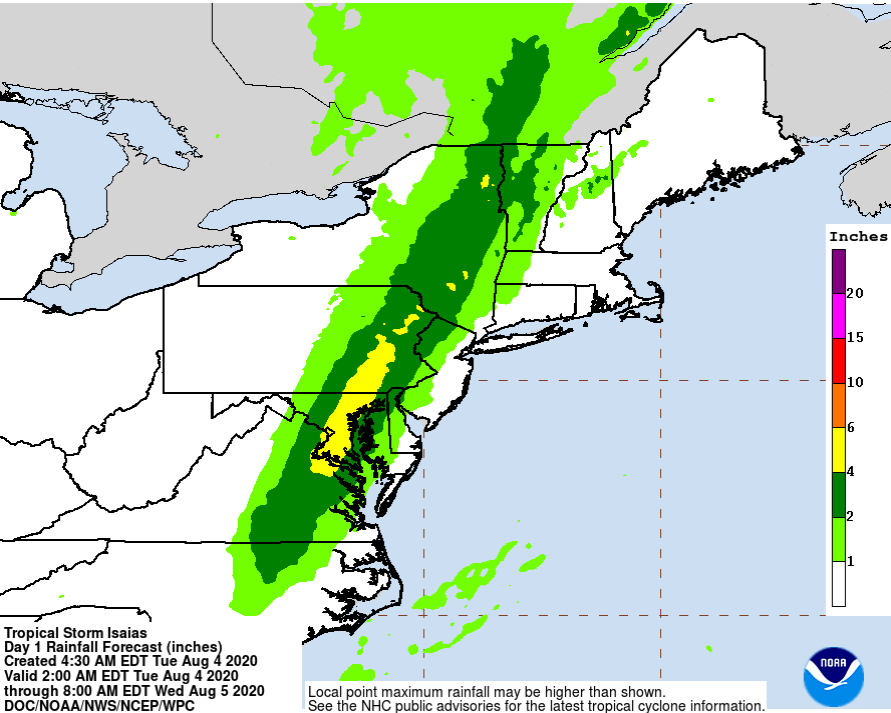 4. Tornadoes have already occurred over portions of northeastern North Carolina and southeastern Virginia overnight. The threat of tornadoes will spread northward along the mid-Atlantic coast today and then across New England by tonight.

The Tropical Storm Warning has been discontinued south of Duck, North Carolina, including the Pamlico and Albemarle Sounds.

A Tropical Storm Warning stretches from:

Tropical Storm Warning: Tropical storm conditions are expected somewhere within the warning area, in this case within the next 12 to 18 hours.

The combination of storm surge and the tide will cause normally dry areas near the coast to flood.

The deepest water will occur along the immediate coast in areas of onshore winds, where the surge and large waves combine.

Wind is another hazard. Widespread tropical-storm conditions are expected in the warning area in the mid-Atlantic states. This includes portions of the Chesapeake Bay region today, with wind gusts to hurricane force possible. We expect tropical storm conditions are expected to reach southern New England this afternoon and northern New England tonight.

The following rainfall accumulations are expected along and near the track of Isaias:

Heavy rainfall along the East Coast will cause flash and urban flooding. Be aware and listen to local safety messages.