Severe thunderstorms bring many dangerous conditions to the areas they impact. One of those conditions is hail.

Folks in the area south-southwest of Denver got a harsh reminder of the dangers of hail when a thunderstorm dropped 16 inches of the white stuff in places on September 3, 2019.

16 inches of pea-and marble-sized hail fell over the course of 2.5 hours across the area south-southwest of Denver, including the following federal parks and wildlife areas:

This hailstorm’s magnitude and length caused a lot of damage. Hail stones damaged several roads, caused flooding, and killed fish throughout the area.

The hail damaged some park roads so badly rangers had to close them.

Visitors at the three parks reported strong odors coming from dead fish that washed up on shore of the rivers.

No one sustained injuries during the intense hailstorm.

This lightning detection combination allows our meteorologists and weather intelligence tools to track a storm’s movement, accurately gauge its strength, and send out alerts before threats like this exist.

From 7pm MT to 11pm MT on September 3, 2019, our total lightning network detected 6,294 pulses in a 10-mile radius around Spinney Mountain State Park. 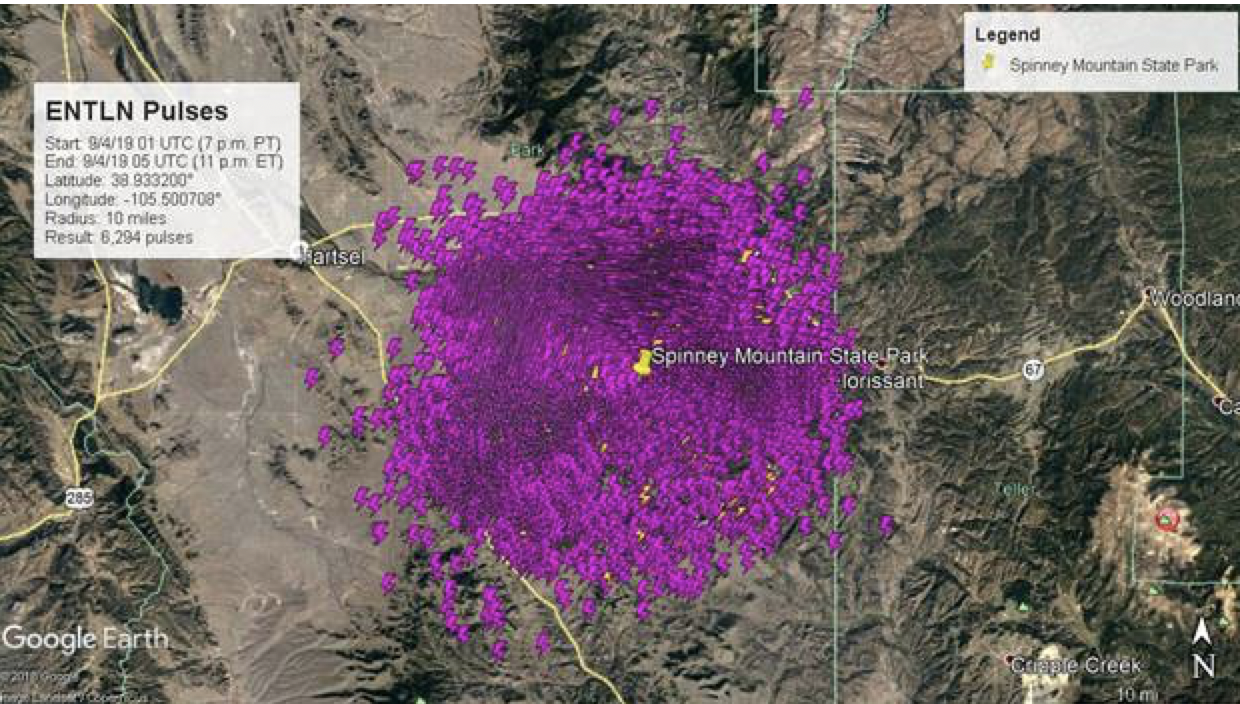 The magenta pulses are in-cloud lightning strikes while the yellow pulses are cloud-to-ground strikes.

It may look like there are a lot of in-cloud lightning strikes, but that’s normal. In fact, over 80% of all lightning strikes are in-cloud. That’s why having total lightning detection is so important. If a network or system is only detecting cloud-to-ground pulses, it’s missing out on a majority of strikes.

One interesting fact we found during our total lightning analysis is that a cloud-to-ground strike hit very close to the Spinney Mountain State Park Welcome Center. 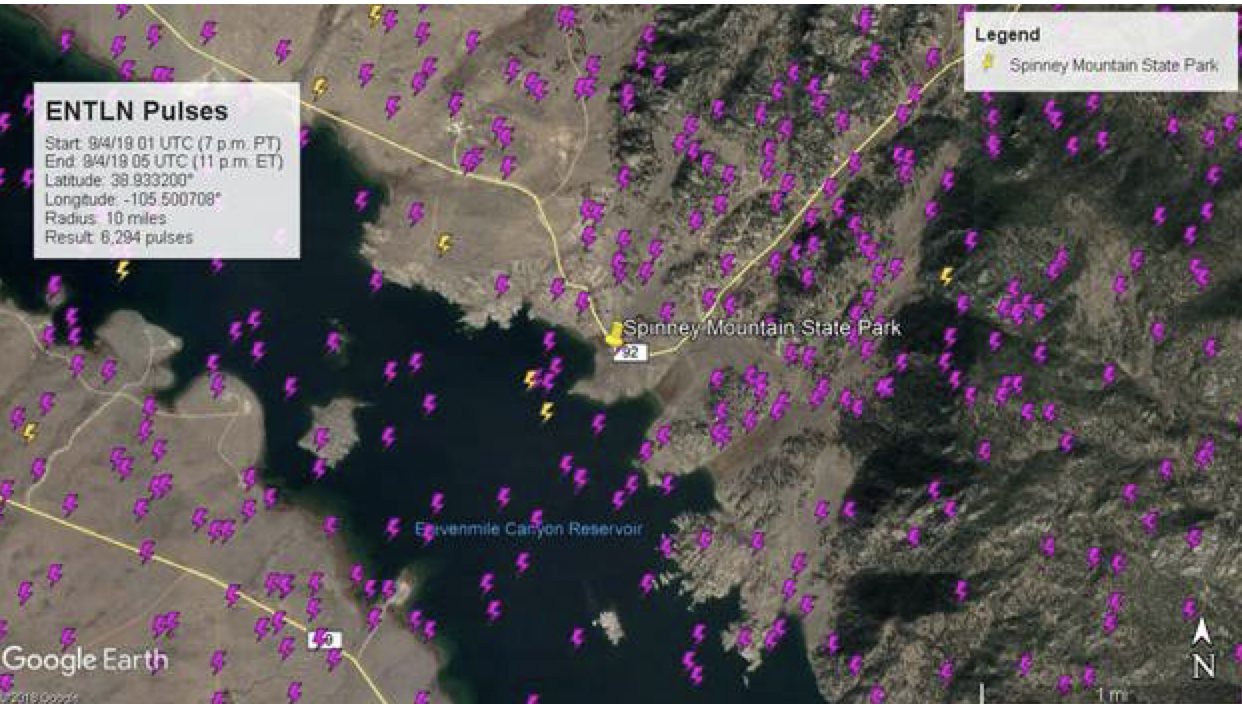 If you take a look at the image above, you can see a yellow cloud-to-ground strike over the water just 537 meters from the welcome center.

This strike occurred around 9:53pm MT and thankfully no one was out on the water.


During the same period, our total lightning network detected 392 Cell Tracks and three Dangerous Thunderstorm Alerts (DTAs). The cell tracks are different-colored circles and the DTAs are purple polygons. 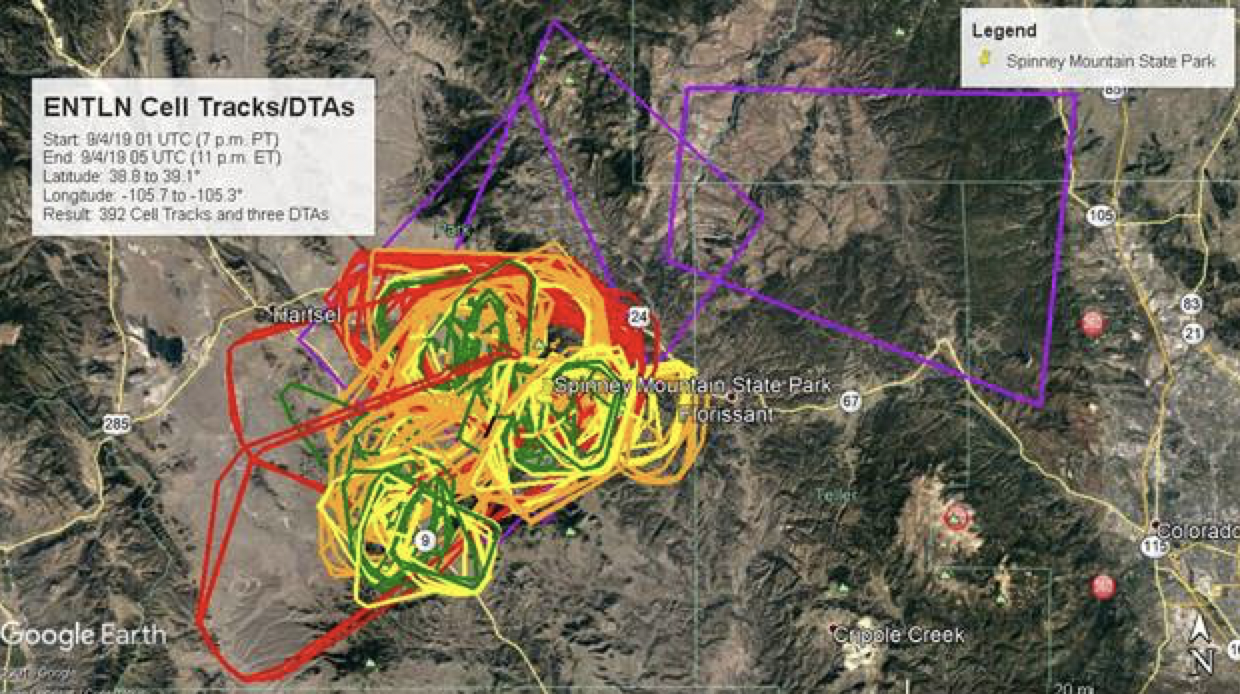 One intense Cell Track had a flash rate of 20/min at 7:28pm MT and moved north-westward towards Spinney Mountain State Park.

The flash rate increased to 29/min, which triggered our first Dangerous Thunderstorm Alert.

How Do Cell Tracks and Dangerous Thunderstorms Work?

Our total lightning network doesn’t just detect lightning. It uses that detection to help people track storms and understand what type of weather-related threats are on their way.

We do this through cell tracks and dangerous thunderstorm alerts. 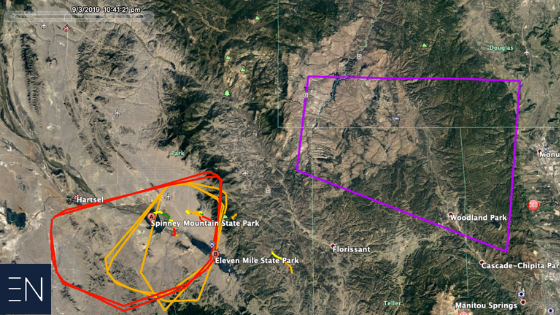 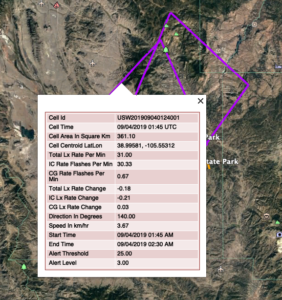 When a thunderstorm cells forms our network generates a cell track, which shows the intensity of a thunderstorm via total lightning strike frequency.

Once lightning strike frequency hits a certain threshold, we issue a DTA.

DTAs look like purple polygons on our weather map and show which direction a storm is moving, the lightning flash rate, and that dangerous conditions like hail, high winds, and heavy rains are on their way.

Our DTAs also include information like in-cloud flash rate, cloud-to-ground flash rate, speed, start and end times for the alert, and the direction.

If you’re ready to see how our total lightning network and DTAs can improve operations and safety at your business, please click the button below!

The National Oceanic and Atmospheric Administration also captured this slow-moving thunderstorm on their radar.

This image coincides with when our network issued the first DTA.

Hail can cause a lot more damage than one might think. Hail is a big threat for those in the agriculture business, as larger stones can cause damage to crops.

We covered a case of crop damage caused by hail back in 2016. Winemakers in the Pic-St-Loup area of France lost nearly all their crop when a violent, fast-moving storm dumped golf-ball sized hail into their vineyards. This happened just days before their scheduled harvest.