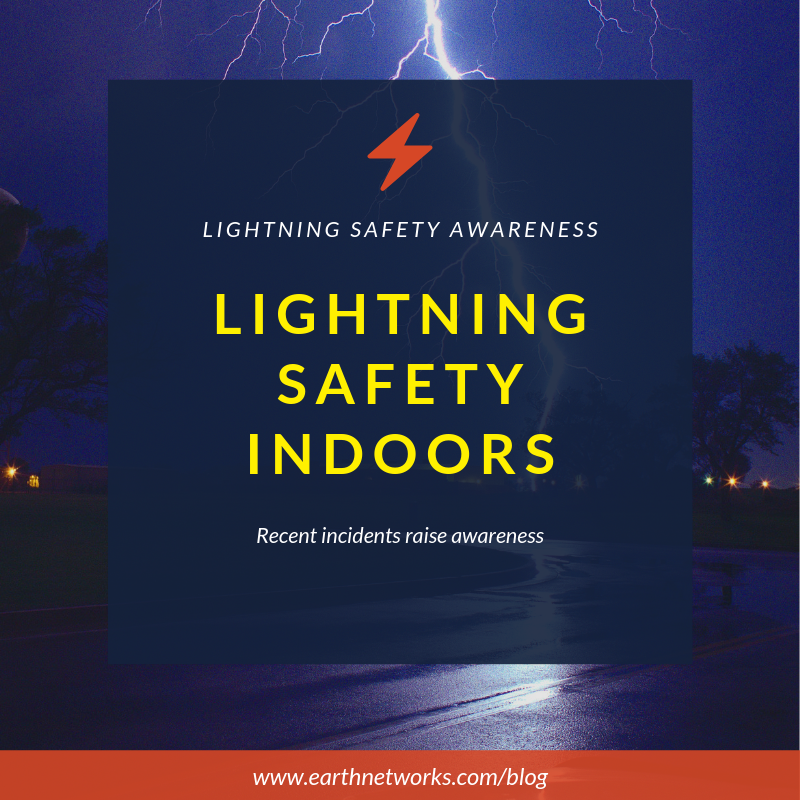 Today is the fourth day of Lightning Safety Awareness Week and the theme is lightning safety indoors.

In this post, we’ll go over some basic ways to stay safe from lightning indoors and highlight some recent incidents where lightning impacted people who weren’t outside.

How Does Lightning Enter A Building? 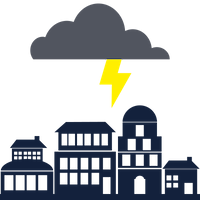 The first question most people have when thinking about lightning safety indoors is how lightning gets into a building.

There are three main ways lightning can enter your home or business.

The first way is by a direct strike. That’s when a lightning bolt directly hits the building you’re in. Lightning can jump through windows, so keep your distance from them during storms!

The second way lightning can enter a building is through pipes or wires. If the lightning strikes utility infrastructure, it can travel through those pipes or wires and enter your home that way.

The third and final way we see lightning enters buildings is through the ground. Remember, you can always be struck from below.

You’ve probably heard the saying: “When thunder roars, go indoors!” but that is just the first step towards protecting yourself and others from the dangers of lightning.

Once you’re inside a lightning safe shelter, there are a few things you should (and shouldn’t) do to keep yourself safe.

Things You Shouldn’t Do During a Thunderstorm

There is a long list of things you shouldn’t do during a thunderstorm and they all connect to the ways lightning can enter a building.

The first lightning safety tip you should keep in mind is to stay away from corded phones or anything else with a cord, including TVs and computers. Remember, lightning can travel through wires so it’s important to stay away from things that are plugged in during a thunderstorm. You’ll see why this is so important later in this blog post.

You need not unplug your electrical devices. That actually puts you in more danger. Just stay away until the thunderstorm passes.

The second thing you should avoid is water. Since lightning can travel through pipes, avoiding taking a shower or bath and doing the dishes during a thunderstorm. Trust us: Lightning can strike you while you’re showering. It’s not an old wives’s tale!

Since lightning can jump through doors and windows it’s important to avoid those areas. It’s also imperative that you stay away from concrete floors (like in your basement for example) since lightning can travel through the ground.

Things You Can Do During A Thunderstorm

If you’re indoors during a thunderstorm, there are plenty of things you can do safely. Feel free to use cell phones, laptops, and tablets as long as they aren’t plugged in.

It’s also a good idea to make sure any furry friends are also indoors. Doghouses are not a lightning safe shelter, so bring Fido in before storms reach your area. 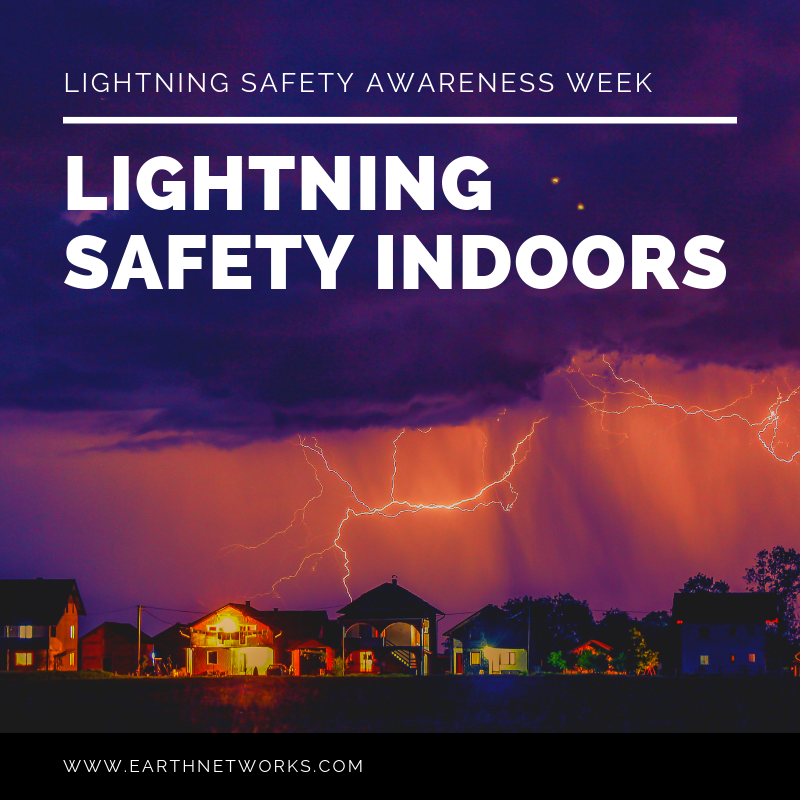 Have you ever thought about lightning safety tips but ignored them, thinking: “What are the chances?” We promise you, you’d rather pay attention to these tips than ask an alternative question, like: “How did this happen?”

There have been a few recent incidents of lightning striking people indoors, both on private property and at schools.

We ran lightning analyses for the following cases using our Total Lightning Network. Keep reading to see what these people were doing when lightning struck indoors so you can learn how to protect yourself and those around you.

One recent indoor lightning injury happened on June 8, 2019. As thunderstorms swept through Aiken County, South Carolina, a 14-year-old girl reached for her cell phone. She had the phone plugged into the wall and a lightning current traveled through the cord and into her arm.

Our Total Lightning Network detected over 16,000 in-cloud (purple) and cloud-to-ground (yellow) strikes in 12 hours. You can watch our lightning analysis video below.

The girl’s injuries were limited to a loss of feeling in her arm and shock. She spent the night in the hospital but officials expected her to make a full recovery.

Another scary incident happened when an 8th grader was washing his hands. Storms were moving through Charlotte County, Virginia, throughout the day. There were multiple flood warnings and tornado warnings active for the area on Monday, September 17, 2018.

During the afternoon hours, the victim went to wash his hands at the classroom water fountain. That’s when an electrical current from a lightning strike traveled through the plumbing and hit him.

The 14-year-old heard a large boom and felt the electricity travel through his hand and then up his arm. The victim was conscious after the event. The school called an ambulance and his mother. They took him to the hospital just to be safe, but the hospital released him shortly after with no major injuries.

Leading up to the incident there was plenty of severe weather in the area. Our Total Lightning Network detected 1,805 in-cloud lightning pulses and 55 cloud-to-ground pulses within a 25-mile radius of the school from 1:00 – 3:00 p.m. local time. There was even a tornado warning in effect for the area. 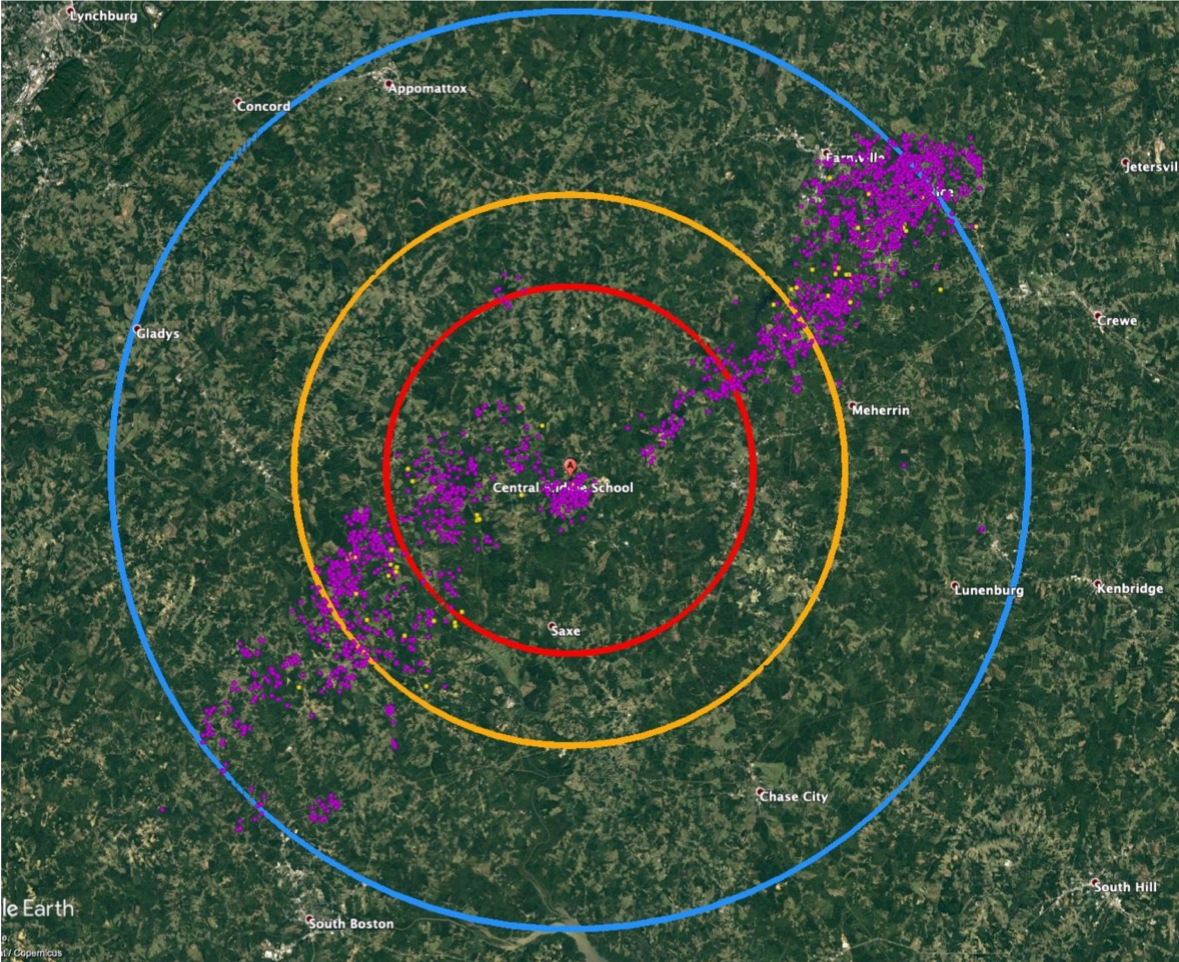 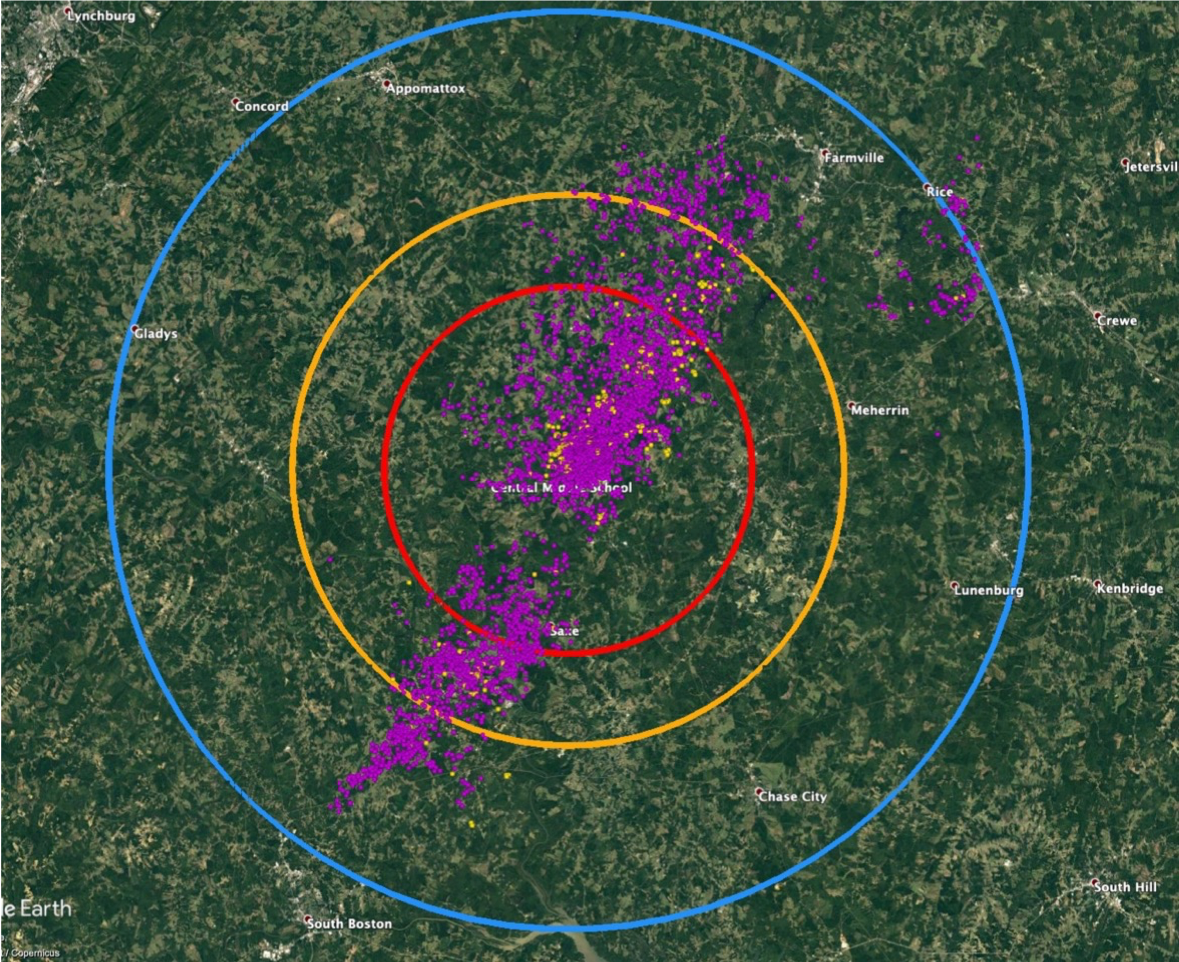 We’re more than halfway through Lightning Safety Awareness Week 2019. Make sure you subscribe to our blog so you can read our next two posts right away.

Lightning safety needs more focus than just one week. Make sure you stay up to date with the latest lightning facts and safety tips by visiting our lightning facts page.

You should also share this important safety information with friends, family, and coworkers to help promote lightning safety throughout the year.