The team, led by Andrew Prata and Arnau Folch from the Department of Computation Applications in Science and Engineering (CASE) at the Barcelona Supercomputing Center (BSC), has published a multidisciplinary study on the 2018 eruption of the Indonesian volcano Anak Krakatau.

You can skim through this post to learn the basics, but we highly recommend you read the full first detailed account of tropical deep convection triggered and sustained by magma-seawater interactions in Nature Scientific Reports.

To understand the study, it’s important to understand what happened at Anak Krakatau in late December 2018. 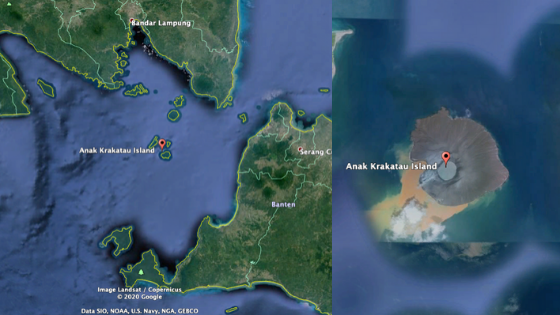 After growing an average of 13 cm per week since the 1950s, Anak Krakatau erupted on December 22, 2018. The eruption sent the southwestern flank of the volcano into the Sunda Strait.

When this mass slid into the sea, it sent a 4m high wall of water around the Sunda Strait. This tsunami killed over 400 people throughout Sumatra and Java, becoming the deadliest eruption of the 21st century so far. It also injured 7,000 and displaced nearly 47,000.

The flank collapse didn’t just cause a tsunami. It also caused a thunderstorm that lasted six days.

Tropical thunderstorms can be triggered in several ways. While the more common methods include solar heating or convergence of surface winds, volcanic eruptions can also cause thunderstorms.

How do volcanic eruptions cause thunderstorms? An erupting volcano generates heat at the surface which initiates deep convection. Intense heating at the ground surface and entrainment of moist air generates positive buoyancy, which rapidly transports volcanic gases and ash particles up to the tropopause (boundary in the Earth’s atmosphere between the troposphere and stratosphere) and beyond.

The continual source of heat (magma) and moisture (seawater) at the surface led to a sustained, positively buoyant plume and sustained ice production in the upper troposphere. This is why the thunderstorm lasted so long.

How Did We Help?

If you want more detail, make sure you go read the full report!

This article is included in our ‘Remote sensing of Earth hazards’ research Collection, which is still open for submissions: https://t.co/Bvd6EEGhoh. https://t.co/qPYw7fG57K